In mid-March 2012, 22 elephants, adults and calves, were found dead with their ivory tusks missing in Garamba National Park in the Democratic Republic of Congo (DRC). Days later, a Ugandan People’s Defence Forces (UPDF) military helicopter was seen flying low over the park. The Ugandan military has not been permitted to operate within the DRC since 2011 due to political tensions between the two countries. However, UPDF is known to do occasional fly over parts of the park in pursuit of the Lord’s Resistance Army. 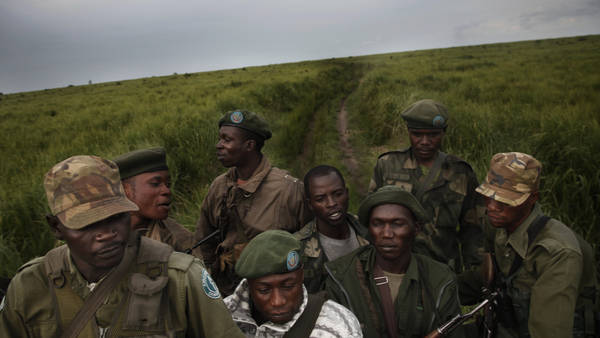 Heavily armed platoons of rangers at Garamba National Park in the Democratic Republic of Congo wage war against elephant poachers. By Ben Solomon on September 3, 2012. | http://goo.gl/HcYMP5

An investigation led by INTERPOL and the officials of the Garamba Park was reported on in an article by a Kenyan newspaper, The East African. Elephants were killed with a single shot to top of the head. No meat was taken from the elephants; this dispels ideas of subsistence poaching. There were no footprints leading away from slaughter site, so attackers must have been transported in and out by helicopter. The LRA does not have helicopters, and therefore could not have been involved in this particular incident.

Ugandan military leader Colonel Felix Kulayigye denied all allegations of poaching. He claimed UPDF often fly over the Park in search of members of the LRA. The United States Department of State said at the time that there was no evidence of Ugandan military involvement in wildlife crime. The U.S. has a long history of sending military aid to the UPDF to support their search for Joseph Kony and the LRA. Assistant Secretary of State Johnnie Carson said that the U.S. would continue to support the UPDF’s efforts to find Joseph Kony, as long as there is no evidence of abuses by the UPDF. Ivory seized at a Ugandan airport matched the description of the elephants killed in Garamba, and Interpol launched an investigation into the connection.

Other regional governments have accusations of poaching and involvement in wildlife crime. The Sudan People’s Liberation Army is known to target wildlife for a personal revenue and sustenance source. The Congolese army has been implicated in several poaching episodes in Virunga National Park. DRC President Kabila is aware of the corruption within the Congolese military.[15]

Corruption among range country governments, military and wildlife forces puts animals in danger, and creates space for bad actors to operate. If the Ugandan military is actually involved in poaching, who are they to force the LRA and Al-Shabaab to quit poaching and trafficking animals. Wildlife protection and conservation must be a priority for the military and government of a country.