Some 40% of prescription drugs are substances originally extracted from plants, animals, fungi and microorganisms. Well-known products involving endangered and threatened species include tiger bone, rhino horn, sea turtle shell, and bear bile. Wildlife products from over 1,500 species are used in traditional Chinese medicine. Many of these products are used to treat conditions ranging from cancer, mental illness, and various injuries. These products vary widely in their actual use and are often combined with other medicinal products after being turned into various drinks, pills, and powders. Products like tiger bone or rhino horn are typically crushed into a powder, whereas bear bile is often kept in liquid form.

Traditional Chinese Medicine (TCM) is one such form of medicine that uses wildlife products. TCM originated in China over 2,000 years ago. It involves treatment through the use of herbs and wildlife products, exercise, acupuncture, and dietary therapy. TCM treatment is based on concepts such as ying and yang, the Taoist five elements (fire, earth, wood, metal, and water), and Qi (“chi”)–a vital energy that flows through the body. Health and sickness are a result of the balance of these concepts and the outside world. 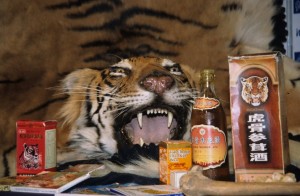 Acknowledging the difference between western and traditional medicine such as TCM is one thing. However, accepting TCM as a form of medicine that should not be subject to scientific inquiry is another. As stated by Alan Levinovitz, to do so would create

An absurd picture of China as a mysterious place where logic doesn’t—and shouldn’t—apply. In truth, skepticism, empiricism, and logic are not uniquely Western, and we should feel free to apply them to Chinese medicine.

Exploiting endangered species for medicinal purposes should be subject to the greatest scientific testing available. In many cases the use of products derived from endangered species are for maladies that are easily treatable with readily available medicines that have scientifically proven results. Cultural differences should be respected, but not if such differences mean the extinction of species. Extraordinary claims require extraordinary evidence, and proponents of traditional medicines such as TCM have yet to provide such evidence.