Thailand has become the second largest market in the world for illegal ivory, and by some estimates, the world’s fastest growing. Between 2009 and 2011, 10,923 kilograms of ivory was seized coming into the country. From January 2013 to December 2013, ivory pieces on sale at outlets in Bangkok grew from 5,715 to 14,512, an almost three-fold increase. During that period, the number of outlets selling ivory increased from 61 to 105. Even in the month before CITES Conference of the Parties in Bangkok, 9,000 ivory products were found for sale in the city, in spite of promises by the nation’s leaders to stop the illegal trade. Recent data on prices is lacking, but between 2000 and 2008 the cost of tusk tips increased from $100 USD/kg to $350—$1200 USD/kg (a 3 to 12-fold increase).

The elephant, symbol of the Thai monarchy, is considered sacred and greatly revered in traditional Thai culture. The elephant’s mythical role as protector and bringer of good fortune has led many Thais to believe that wearing ivory amulets or jewelry will imbue the wearer with these traits. However, younger urban residents have been largely disconnected from their historical relationship with elephants, once integral to everything from the tourism to the logging industry.

In the past, Europeans, Americans, Chinese, and Japanese largely bought ivory worked and sold in Thailand. This suggests that the majority of the ivory market until recently was geared towards tourists. Many of ivory retailers are still located in areas heavily frequented by tourists. As of 2008, 11% of four and five-star hotels had ivory souvenirs for sale with upwards of 1,352 pieces total. Although hotel stores continue to be significant retailers of ivory trinkets, the numbers dropped considerably between 2003 and 2008. A parallel shift towards smaller pieces also occurred at this time.

Recent trends in ivory consumption suggest that ethnic ties are playing a greater role in demand for these products. Interviews yielded three prominent categories for ivory consumption in Thailand: the (typically older) wealthy elite and government officials, who often buy expensive an elaborate pieces sometimes consisting of entire tusks; religious or superstitious consumers who mostly seek amulets for their ‘magical’ properties; and generally wealthier tourists who are unaware or feign ignorance of ivory laws. Men tend to be the main buyers of ivory amulets, many of whom are Buddhist monks. There is a huge informal economy in Thailand surrounding ivory amulets, the most valuable of which can fetch upwards of $100,000 USD. Monks often give amulets, whose magic is said to remove evil spirits, in return for donations.

Ethnic Thais and Thai Chinese are now major buyers of ivory in Thailand. Thais buy mostly Buddhist artifacts and amulets, while the Chinese more often buy Chinese figurines, chopsticks and sometimes entire tusk carvings. TRAFFIC found that 35-52% of ivory pieces were bangles and large-scale pieces have become increasingly rare. This could imply a large customer base and a growing middle class distanced from the religious reverence for the elephant is adopting a taste for ivory trinkets.

A Cultural Approach to Demand Reduction
A collaborative event between WWF and Bangkok’s Buddhist community brought Buddhist out monks to pray before a mural of an African elephant just before the 2013 CITES Congress of the Parties. It was a step towards bridging deeply held cultural values and the global conservation movement. Joining Buddhist ideals of respect for nature and the spiritual importance of the elephant could prove effective at shifting attitudes.

Daniel Stiles explains that in an effective ivory awareness campaign in Thailand specifically, “the message should stress the connection between Buddhist legends and elephants, then play on Asian beliefs in propitious and unpropitious elements in the universe.” Associating murdered elements to misfortune plays better with the beliefs of many Thais than does the image of a butchered corpse. These culturally specific awareness campaigns, however, are not short-term solutions. It takes time to shift deeply engrained cultural norms.

For many years, domestic and neighboring country Asian elephant populations satisfied Thai demand for ivory products. While wild elephants are protected under the Wild Animal Reservation and Protection Act (WARPA) of 1992, the 1939 Draught Animal Act permits the trade of live domesticated Asian elephants and the sale of their ivory, while killing them is strictly prohibited. However, owners of Asian elephants sell and trade with little oversight. The ETIS report following CoP16 rated Thailand worst on regulation of its ivory market.

After the end of World War II, Thailand began importing ivory, suggesting that its domestic supply of ivory from Asian elephants was already then insufficient to satisfy demand. It is legal to sell the tusk tips of live elephants or the entire tusks of those elephants that die of natural causes. There is no comprehensive registration system for domestic elephants either. This offers perfect cover for disguised African ivory, which is very difficult to distinguish from the Asian variety. Legal and uncertified domestically sourced ivory stocks make it easy for African ivory to be smuggled in and sold.

High levels of organized crime, little enforcement, and an unregulated domestic market have led to an increase in ivory retailers and demand for their products. ETIS has ranked Thailand among the lowest scoring for rule of law and law enforcement, and one of the highest for organized crime. Interviews with Thai ivory sellers show that fabrication of counterfeit ivory certificates is commonplace and relatively easy to do. Although Thailand made only 53 seizures from 2009 to 2011, 77% of them were large-scale, suggesting heavy involvement of organized crime. In mid-April of 2015, four tons (739 individual tusks) originating from Democratic Republic of Congo were seized by Thai customs officials. These intermittent, large-scale seizures are not signs of progress. Rather they shed light on the huge scale of the ivory trafficking in South-East Asia. The new military regime must increase enforcement capacity, strengthen certification procedures, and crack down on corruption if progress is to be made. 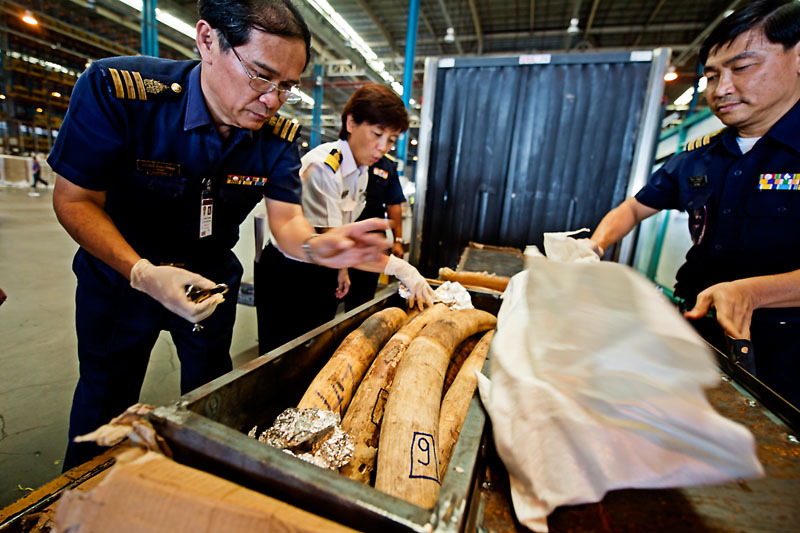