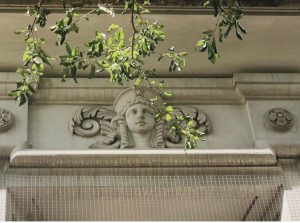 II. Date: The Head of Athena was completed in 1937 along with the construction of the Main Building of the University of Texas, which it is located on (Berry).

The Main Building was constructed around the tower as a central library, and many classical symbols including the heads of Athena were placed on the building to encapsulate the values of higher education (Nicar). The head of Athena was included in design of the main building because in Greek myth, Athena is often associated with wisdom and democracy. Since the main building was constructed to be a library, the architect, Paul Cret, included Athena as a symbol of wisdom. In addition, Cret wanted to include elements of democracy on the campus in order to speak to the aspirations of the university and pay homage to America’s ancient Greek democratic origins (Nicar).

IV. Description: The sculptures of the Head of Athena were constructed from Bedford Indiana Limestone as was the rest of the Main Building (Berry). Athena is depicted from the neck up, with a solemn look on her face. She is looking straightforward as if she were looking at the capital building of Texas. She is wearing a cap with a star on it and there is a wreath around her head at the base of the cap. Additionally, she is surrounded by a spiral on each side that is partially covered with leaves.

The symbolic meaning of the head of Athena on the Main building of the University of Texas is that Athena is related to wisdom and democracy. The wisdom of Athena can be seen in the myths of her birth. In Hesiod’s Theogony, she was described as the daughter of Metis who was cunning intelligence, and Zeus who was king of the gods (Hesiod, Theogony, lines 891-892 in Anthology of Classical Myth: Primary Sources in Translation). When Zeus was told by Gaia that Metis would have a son more powerful than he, he swallowed her while she was pregnant with Athena (Hesiod, Theogony, lines 893-905 in Anthology of Classical Myth: Primary Sources in Translation). Athena was said to be equal to Zeus in wisdom and strength, and her mother Metis was also closely associated with intelligence and wisdom, thereby connecting Athena herself to wisdom (Atsma). By including Athena on the main building, Paul Cret connected the wisdom of Athena to the University of Texas. In this portrayal of Athena, her solemn look depicts her as wise and dignified like she is in the Greek myths associated with her. In addition to her connection to wisdom, Cret wanted the main building to have a sense of the democratic origins in Ancient Greece being that America was a modern democracy (Nicar). He did this by including classical elements such as the head of Athena because Athena was the patroness goddess of Athens, known for their democracy (Kennedy). In myth, Athena also encouraged law and order and was the Goddess of the Citadel, which meant that she controlled the fates of cities (Buxton pp. 79-80). In this depiction of Athena, she is facing the Capital building of Texas which may be due to her connection to democracy. By including Athena in this position of the Main Building, Cret connected the building and the university to a dignified democracy of Athens.