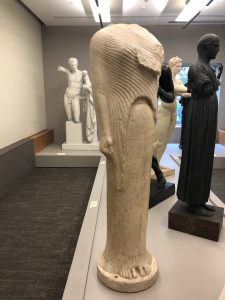 I. Artist: The creator (sculptor) of the statue of Hera of Samos is unknown – the Blanton museum lists the creator as “Anonymous”. The inscription on the dress of the statue reads “Cheramyes dedicated me, a statue of Hera.” This implies that Cheramyes, an Greek aristocrat from Ionia, was the one who commissioned this piece as a monument to the
Greek goddess.

II. Date: This sculpture (a Battle cast made from the original sculpture discovered on the Greek island of Samos) was reproduced in the 19th century. The Battle casts were
created by the Caproni Brothers and August Gerber, who were based in Boston and Cologne respectively. They had a reputation for creating the most authentic casts at the time. The original sculpture was created between 570 – 560 BCE, and it is aptly named, “Dedication by Cheramyes to Hera of Samos”.

III. Location: This Battle Cast was found in the Blanton Museum of Art on the campus of UT Austin.

IV. Acquisition: William J. Battle, a professor at UT starting in 1893 (and the 6th President of the University), felt it was important to teach students about the importance of Greek
artwork. Thus, from 1894 to 1923, a collection of over a hundred plaster casts (thirty
were later lost or destroyed) were commissioned to be displayed on UT campus. As to this cast, it was probably included in Battle collection due to Samos’ prominence as the mythological birthplace of Hera and because it is a good example of a Kore type of sculpture.

V. Description: The cast is approximately 76 inches tall, and spans 19 inches in both width and depth. According to the Blanton Museum directory, its medium is a painted plaster cast. The original sculpture is part of the Louvre Museum in Paris. It is identified as a Kore sculpture. Kore-type sculpture (the female counterpart to the male Kouros-type sculptures) is the typical form for free standing statues of gods and humans during the Greek Archaic period. They are statues of young females who are fully clothed and stand erect with their feet together, or with one foot slightly advanced in front of the right. The arms of this type of sculpture are either straight down at the sides, or in many cases, one arm is elevated across the front of the body or extended out holding an object.

This sculpture’s relationship to classical mythology stems from where it was discovered. Hera, the queen of the Olympians, sister and spouse to Zeus, was commonly known as the goddess of marriage and child-birth. Although accounts vary, many have listed her birthplace as being the island of Samos, a powerful Ionian city-state. The inhabitants of the island formed a cult around Hera, and built a temple in honor of her known as the Heraion of Samos. The temple was built in at a architecturally challenging location near a swamp. In Greek myth, it is claimed that Hera was born on the banks of the river near the temple, which would further explain the choice of location. Additionally, Samos was seen in some accounts to be the site of her marriage to Zeus, next to the same river (the Imbrasos) that the temple was built.

A number of ancient Greek historians and geographers such as Pausanias (in his Description of Greece), Herodotus, and Strabo mention Samos specifically with the intent of describing the Heraion – “ Some say that the sanctuary of Hera in Samos was established by those who sailed in the Argo, and that these brought the image from Argos. But the Samians themselves hold that the goddess was born in the island by the side of the river Imbrasas under the willow that even in my time grew in the Heraion.” (Pausanias, Description of Greece, 7.4.4). According to Pausanias, only women who were priests were allowed to see the sculptures and recreations of Hera at the temple – “At Aigion [in Akhiyan] you find a temple of Athena and a grove of Hera . . . the image of Hera may be seen by nobody except the woman who happens to hold the office of priestess to the goddess” (Pausanias, Description of Greece, 7.23.9).

In relation to the sculpture dedicated by Cheramyes, it is hypothesized that the
sculpture was of a young woman that “held the key to the temple of Hera in her hand”,
due to part of the metal still being visible despite the hand itself being ruined. This
suggests that the sculpture was most likely symbolically a female cult servant of Hera at
Heraion, which was mentioned by Pausanias. This interpretation may be supported by the
elaborate clothing worn by the figure – the chiton tunic, the sash worn around the waist
(himation), and the veil (epiblema), which all reflect Ionian traditions and seem
likely to be worn by an attendant of the goddess. Sculptures representing clothed
girls in their adolescence, called Kore, were extremely popular in Ancient Greek art,
especially in the Archaic period – several of these statues were found in the Heraion
alone, dedicated by Cheramyes.

Overall, the mythological and symbolic meanings of this sculpture are intertwined with Samos and its association with Hera as her birthplace, place of marriage, and religious cult site. Many of the physical aspects of the sculpture (such as the key to the Heraion and the types of clothing worn) could be religious elements, and the dedication by Cheramyes on the piece solidifies the significance of Samos to Hera as a site of celebration of the goddess.