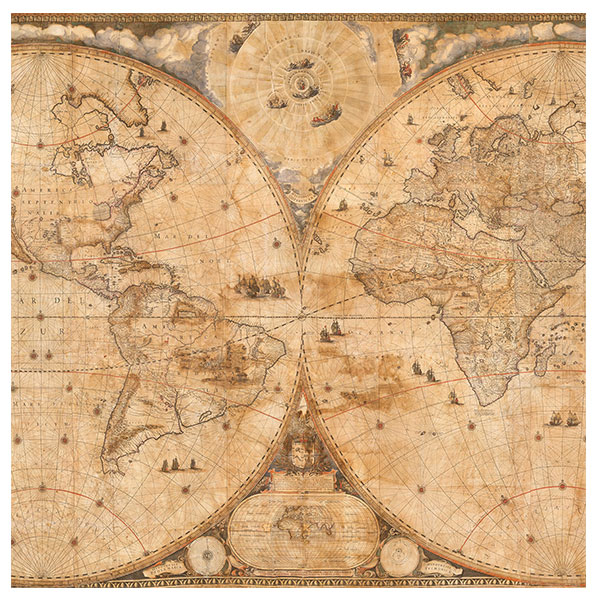 A fascinating project to preserve and display the iconic 1648 Dutch world map is now underway. In previous blog posts, we revealed the history of the Nova Totius Terrarum Orbis Tabula (Blaeu World Map) and the family of cartographers, globe makers, printers, and publishers who created it. We also have discussed the science and conservation taking place to prepare the Texas-sized 371-year-old map (learn more about the map) for public display.

Associate Professor of History Bruce Hunt of The University of Texas at Austin uses illustrations from the map, as well as an atlas created by Dutch cartographer Joan Blaeu (and housed at the Ransom Center) to highlight the connection between astronomy and map making for students in his UT classes.

According to Hunt, it was Joan’s father Willem Bleau who initially reached for the stars, taking the Blaeu family from herring fishermen to leading mapmakers of their era.

When Willem was a young man in his early 20s, he traveled to the island of Hven, now part of Sweden. While he had already developed a keen interest in navigation and mapping, it would be his interaction with Dutch nobleman and astronomer Tycho Brahe that would transform him into a serious mapmaker.

Brahe was a very high-ranking Danish nobleman who was known for his accurate astronomical observations and the development of the Tychonic astronomical system. The king of Denmark made him the feudal lord of Hven, and from the late 1570s to the late 1590s he constructed one of the greatest pre-telescopic astronomical observatories in the world. Willem spent about 6 months on the island with Tycho, and the rest is cartographic history.

“Willem Blaeu was just as interested in mapping the heavens for a celestial globe as he was in mapping the surface of the Earth,” Hunt said. “Celestial globes are something people don’t really pay much attention to anymore. Of course, we see constellations looking from the inside looking out, but you would depict them on a celestial the globe as they would look, on the surface of one sphere. Blaeu was an important figure in establishing the standard depictions of the constellations. But those constellations and having accurate maps of them would not only be important for people interested in the scientific reasons, astrological reasons, but also for navigation. You needed to know the positions of the stars accurately, so you could use them for celestial navigation.”

Hand-painted illustrations on the Blaeu World Map in the Ransom Center’s collection show three astronomical systems: Ptolemaic, Copernican, and Tychonic. The differences between them illustrate the history of astronomy.

“The Ptolemaic system is from the ancient world,” Hunt said. “Ptolemy was a Greek astronomer and mathematician and lived in Alexandria around AD 150. He worked out his astronomical system with the Earth stationary the center; the sun goes around the Earth, and all the planets also go around the Earth.”

This Ptolemaic explanation was perfectly reasonable in most people’s eyes – it certainly feels like we’re in the center of everything and not moving. That was the standard astronomical system for well over 1,000 years, Hunt says.

“Then, Copernicus in Poland in the early 1500s, thinks the system works better if you have the sun in the center and the Earth going around it. He’s basically making that argument on just astronomical grounds of what makes the system work better,” he said.

People did not accept the Copernican system for a long time. It was published it in 1543, and very few accepted it over the next 50 to 60 years. It wasn’t until Galileo and Kepler (after about 1610) that Copernicianism started catching on at all. There was much resistance to Copernicianism throughout the first half of the 1600s. Galileo got into trouble with the Catholic Church over the notion that the Earth is at the center of the universe and whether it contradicted scripture.

“What’s remarkable about the Blaeu Map, as far as I can tell, I’ve seen this said but I can’t really prove it, it seems to be one of the first maps, if not the first map, to depict the Copernican system,” Hunt said. “It is certainly one of the first, if not the very first, to show that as the favored system. It’s given the pride of place; it’s given the best position,” Hunt said.

It is often described as the first map to really promote the Copernican system by prominently featuring a large model at the top center of the map. This is interesting because one may think the Blaeu’s would favor the Tychonic system, which is also shown.

Late in the 16th century, Brahe published his own geocentric model of the solar system, placing the Earth stationary at the center of the universe. While the sun and the moon revolve around Earth, the planets Mercury, Venus, Mars, Jupiter, and Saturn revolve around the sun. The map also includes the Ptolemaic system, but by the time the map came out in the 1648, the Ptolemaic system was already out of favor.

The Blaeu World Map was presented as a gift to Gaspar de Bracamonte y Guzmán, the Spanish ambassador to the peace negotiations in 1648 that ended the 30 Years War. But, was it typical to include all three world systems on a map that would be given as a gift or was he paying homage by including the Ptolemaic system?

“I think [Joan Bleau] just didn’t want to offend anyone by coming down one way or another,” Hunt said. “The other oddity is that the Spaniards are the target of this map, and the Spanish were not the most forward-looking on scientific questions surrounding the motion of the Earth. I think including the Ptolemaic and Tychonic systems, if you’re giving something to the ambassador from Spain, is always a good idea.”

The next journey of this extraordinary 17th-century world map housed at the Harry Ransom Center in Austin, Texas, is underway. Members, donors, and visitors are helping set the course of this amazing project as conservators preserve the one-of-a-kind map, revealing new discoveries about its production and significance. Learn more at https://40for40.utexas.edu/giving-day/19787/department/29215.