When it comes to climate vulnerability, one group of people will be particularly challenged: those living on low-lying islands, especially atolls. There’s frequently news about how quickly climate change will necessitate relocation or resettlement but it often focuses on the time at which sea-level rise will cover the land, making habitation impossible. However, this is not an accurate picture or timeline of how sea-level rise will impact this population, nor is it fair to group everyone living in these areas together. New research into wave and ocean dynamics shows that the impact of sea-level rise and climate change will vary greatly from one island to the next and adaptation measures will need to be tailored to each.

The goal of our research group is to create a map of disaster risk for vulnerable populations, so it was necessary that we be thoughtful about what data we should include to more accurately map the impacts of climate change. One data layer that was discussed was bathymetric data, which contains the topographic features of the ocean floor. However, useful data is difficult to come by in this region (see this post and this post for more discussion on data availability) and bathymetric data is particularly challenging to find, a problem I outlined in my last article. Even if the data were to become available with some of the recent developments discussed, bathymetric data on its own wouldn’t help us quantify vulnerability without an understanding of the ocean dynamics that are at play.

Although doing our own ocean modeling is probably beyond the scope of our research, understanding the general principles that are at play in saltwater intrusion and sea-level rise can give us key insights into what should be included in our map and what might be important to study in the future. In particular, changing bathymetric data would likely give us insight into where and how quickly atolls are eroding and how this could be exacerbated by climate change.

Atolls are islands made out of dead coral that are remnants of reefs that grew on former volcanoes. The coral is often a circular shape, enclosing a central lagoon, with the highest point on these islands often only a few meters over sea level (for a more detailed description of atoll formation and geology see this article). It would be incorrect to say that erosion on these islands can be easily attributed to climate change. Atoll coastlines are inherently flexible and constantly changing, so the attribution of shoreline changes is difficult to prove.

Figure 1a and b

Erosion is a commonly understood dynamic in shoreline changes, however, accretion is equally important for understanding atoll formation and vulnerability. As sediment is eroded and becomes suspended in water, it is transported through waves and currents to a new location. In Figure 1a, you can see the change of part of an atoll over a twenty-year period. In Figure 1b, it’s easy to see the accretion of the land over time, visible by the hight of the vegetation getting shorter from I-III.

Surprisingly, in a survey of the 101 islands of Tuvalu, it was found that although the average sea level there has risen at twice the global average rate (~3.90 +/- 0.4 mm.yr), they found a net increase in the total land area of 2.9%! Of course, this is not the case for every island in the country, with 74% increasing and 27% decreasing in size. This dichotomy shows that the relationship between sea-level rise and inhabitable land is not necessarily as straightforward as it is often painted. Similar to what is seen in figure 1a above, the majority of islands showed both erosion and accretion on different parts of the island.

Of course, not all of these islands were atolls, however, there were a few significant findings that could be helpful in our research. The first is that the greatest erosion was happening on the outer rim of the largest atolls. Figure 2 shows nine different atolls in Tuvalu. Overall, despite the island with the greatest amount of erosion, all but one saw overall accretion. The study found that there is a trend of atolls moving “lagoonward” or inward as outer sediment is transferred to the middle of the atolls. One other significant finding is that although medium and larger islands saw accretion, smaller islands saw increased erosion on average. This could be significant for future studies on vulnerability as smaller islands may need to be prioritized.

As discussed above, rising seas have contributed to a variety of changes in atoll land shape. One other factor that should not be overlooked is the presence of waves and currents in predicting atoll vulnerability. Specifically, the same article discussed that much of the accretion we’ve seen in Tuvalu could be a result of increased wave energy “enhancing remobilization of island shorelines and sediment transfer.” They argue that there is evidence to show that the “lagoonward” movement is likely due to increased sediment transfer. Although this sounds like good news for Tuvaluans wanting to stay on island, these waves will not likely continue to assist in the accretion growth of atolls.

As reefs break down, the impact of wave energy will be even greater. This can be seen in Figure 3, where the reef structure (in brown) will dissipate incoming ocean waves in relation to how long they need to travel in the reef flat (marked three) over the length of the area marked “wave friction.” The longer and more coral-dense the reef, the more energy the wave will lose. As the reef starts to be eroded down, waves will no longer have broken sediment to move lagoonward, nor will the outer shore have the wave reduction protection it needs to keep erosion down. The reef also dissipates energy from large waves during storms, making its conservation important for disaster risk management. 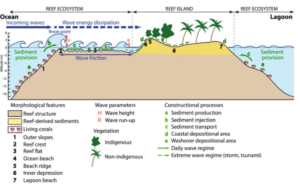 Finally, increased reef productivity can actually result in higher islands. Although large, preexisting corals can have an annual growth rate of 0.3 to 2 centimeters per year, it can take up to 10,000 years for a coral reef to form from a group of larvae. In this way, maintaining and protecting the reefs around atolls will be vitally important to elongating habitability. If we don’t conserve these reefs, we could have to wait 100,000 to 300,000 years before one could develop again.

Although it is difficult to blanketly predict exactly how sea-level rise and climate change will impact atolls and other islands, understanding some of the natural processes behind recent changes can help us frame our research in a dynamic system and recognize the need for further study into natural ocean processes and their impacts on vulnerability. Ultimately, although our map will assist with finding hot-spots for risk, we will be unable to account for all of these varying ocean dynamics in our model. Sea-level rise and climate change will not have a similar impact on every island and adaptation and vulnerability solutions will need to be tailored to match.