At the Butler School, we love collaborating with our students and faculty as much as possible, and we’d like to share a recording with you featuring a composition by one of our very own students, Kevin Charoensri! Check out the University of Texas Wind Symphony, led by Dr. Ryan Kelly, premiering Charoensri’s piece entitled “Rising Light.”

Check out our Wind Ensemble performing “The Seer” by Erik Santos. We hope you enjoy!

Check out our Wind Ensemble’s final performance from our concert featuring the music of John Williams, “Jedi Steps and Finale” from Star Wars! We hope you enjoy!

Check out our Wind Ensemble’s performance of “Scherzo for X-Wings” from Star Wars from our concert featuring the music of John Williams! We hope you enjoy!

We hope you enjoy our Wind Ensemble’s performance of John Williams’ “The Adventures of Han” from Star Wars!

We hope you enjoy this video from our recent concert featuring the music of John Williams. Check out our Wind Ensemble’s performance of “Princess Leia’s Theme.”

We had such a blast performing John Williams’ music on Wednesday night. We’re excited to share with you the video of “Adventures on Earth” from E.T. Be on the lookout for more performance videos in the future, but in the meantime, we hope you enjoy! 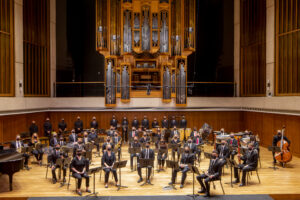 The University of Texas Wind Ensemble will present our first concert of the spring term on Wednesday, February 9 at 7:30 p.m. in Bates Recital Hall in Austin. This will be a preview performance for our concert at the Texas Music Educators Association Annual Convention on Friday, February 11 at 8:30 p.m. in the Lila Cockrell Theater in San Antonio.

The concert will open with John Williams’ setting of The Star Spangled Banner, performed in honor of Mr. Williams 90th birthday on February 8. We will then perform Low Down Brown Get Down by UT Professor of Composition Omar Thomas. Low-Down Brown Get-Down is the soundtrack for a nonexistent blaxploitation film. It pulls from various sounds and styles of African-American folk music, such as funk, R&B, soul, early hip hop, the blues, and even film noir to stitch together its “scenes.” The title pulls from and is inspired by “post-jive” African-American Vernacular English (AAVE). The word “Brown” in the title, in addition to its reference to none other than the Godfather of Soul, James Brown, whose most-famous licks and bass lines pepper the intro and recur throughout the piece, also refers to the melanin of the people who created these sounds.

This piece unapologetically struts, bops, grooves, slides, shimmies, head bangs, and soul claps its way straight through its thrilling “chase scene” finale. It was my intention with the creation of this piece to go full steam ahead on bringing African-American folk music to the concert stage to take its place amongst all other types of folk music that have found a comfortable home in this arena. May this work push back against notions of “sophistication,” “appropriateness,” and “respectability” that have been codified in the concert music setting for a century and more.

Professor of Trumpet and Principal Trumpet of the Metropolitan Opera, Billy Hunter will then perform Alexander Arutiunian’s Concerto for Trumpet. This performance will feature the ensemble setting transcribed by former distinguished professor of trumpet, and teacher of Professor Hunter, Raymond Crisara.

The program will conclude with a performance of Ottorino Respighi’s The Pines of Rome, transcribed by Jacco Nefs. Joining the Wind Ensemble will be Professor Andrew Brownell, organ, and for the final movement, members of The Cavaliers Drum Corps!

We would love to have you join us for what will be a very exciting concert!

Today, we’re sharing our Wind Ensemble’s performance of Aram Khachaturian’s “Spartacus: Adagio of Spartacus and Phrygia.” Check it out!