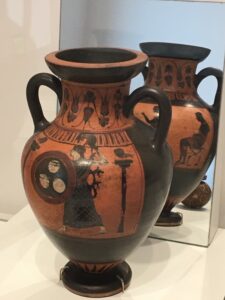 III. The Black-Figured Neck-Amphora of Panathenaic Shape is located at the Blanton Museum within The University of Texas at Austin.

IV. This piece was able to be retrieved through the Archer M. Huntington Museum Fund and the James R. Dougherty Jr. Foundation. Due to the individual who donated the amphora wishing to remain anonymous, it is difficult to determine why the previous owner of the amphora decided to donate the piece in particular to the Blanton Museum. The piece did come to the museum through the stated foundation during 1980.

V.  This amphora is 27.5 cm. On the front of the amphora is an image of Athena, standing in a fighting pose with her signature spear and shield. Two owls can be seen on the columns surrounding her while on the back sits a man playing the pipes to a bearded judge. Athena is also depicted as a white figure while the men at the back of the amphora is depicted as black as a way to characterize gender.

The Classical mythological elements that are presented in the piece would be the owls in association with Athena and references to the Panathenaic Festivals. Athena’s attributes are presented in the amphora with the depiction of owls, a helmet, a spear, and an aigis.[2] The owl is considered one of Athena’s attributes, which can be seen in a myth in which  she turns a princess from the island of Kos into an owl for making fun of her grey eyes.[3] The spear, the helmet, and aigis can be seen during the Athena’s first moments as she springs from Zeus’ head with her helmet, “shaking a sharp spear…hold[ing] the aigis.” [4]

The mythological elements of the Panathenaic Festivals are presented with the unknown man playing an kithara to a judge. The depiction can be interpreted as the Panathenaic Festivals due to the statement of Smith and Planzos, commenting that the beginnings of the Panathenaic Festivals marked a turning point in Greek lekythos making as the style of Panathenaic Amphora – the style of the amphora in Blanton – just beginning to emerge in Greek history. [5]   A lekythos can be described as being “used as a containers for oil, perfumed oil, and as an offering for the dead.” The kithara is important in Greek Mythology through its representation of music and by the painter utilizing such a design is able to elude to the importance of music in Athens to Apollo’s love for music. In Herodotus, a skilled player of the kithara named Arion was thrown overboard from a ship and was miraculously saved by the dolphins of Apollo.[6] Such rescue of a kithara player represents the approval of the instrument by Apollo and ultimately its favor presented in the Panathenaic festivals.

The symbolic aspects of this amphora can be seen through the depiction of Athena and the assumed depiction of the Panathenaic Festivals -a religious festival that included athletic and musical competitions as well as cultural events – as a representation of what Athens stands for as a whole.[7]  If this amphora is associated with carrying oil, it makes for an interesting symbolic connection to the mythological contest between Poseidon and Athena to become the patron deity of Athens.[8] In Pausanias’ Description of Greece, “Athena is represented displaying the olive plant, and Poseidon the wave” and through Athena introducing the olive plant to Athens, the goddess wins patronage of the city.[9] With Athena’s connection to olive oil and Athens, a connection is thus established between Athenian oil containers and depictions of “a fighting Athena” as she is able to represent the athletic competitions of the Panathenaic games where competitors would wrestle for the prize of an olive wreath.

The man playing an instrument in front of a judge is also symbolic as it appears to be a description of the Panathenaic Festival – a particular festival that finds its origins in the creation of Athens as a city state. In Plutarch, he tells a myth about how Theseus created a city-state and “he called the city-state Athens, and instituted the communal festival of the Panathenaia.” [10] The Panathenaia was a place rich with festivals and music to worship the patron goddess Athena and many competitions emerged in praise of crafts and arts. One of these competitions can be seen during the Greater Panathenaea, where there were contests of the rhapsodes of old and the winner would receive an olive crown set with gold.[11] Such music contests represent the importance of the olive tree as the winner of such competitions would receive the symbol of Athena as a grand prize.

In many respects, this amphora in the Blanton Museum represents the strong connections between the Athena of Greek mythology and the customs of Athens.

[8] Debra Schafter, A Lekythos in Austin Attributed to the Oionokles Painter and the Representation of Nikai on Late Archaic and Early Classical Lekythoi (Austin: The University of Texas at Austin., 1989), 7.