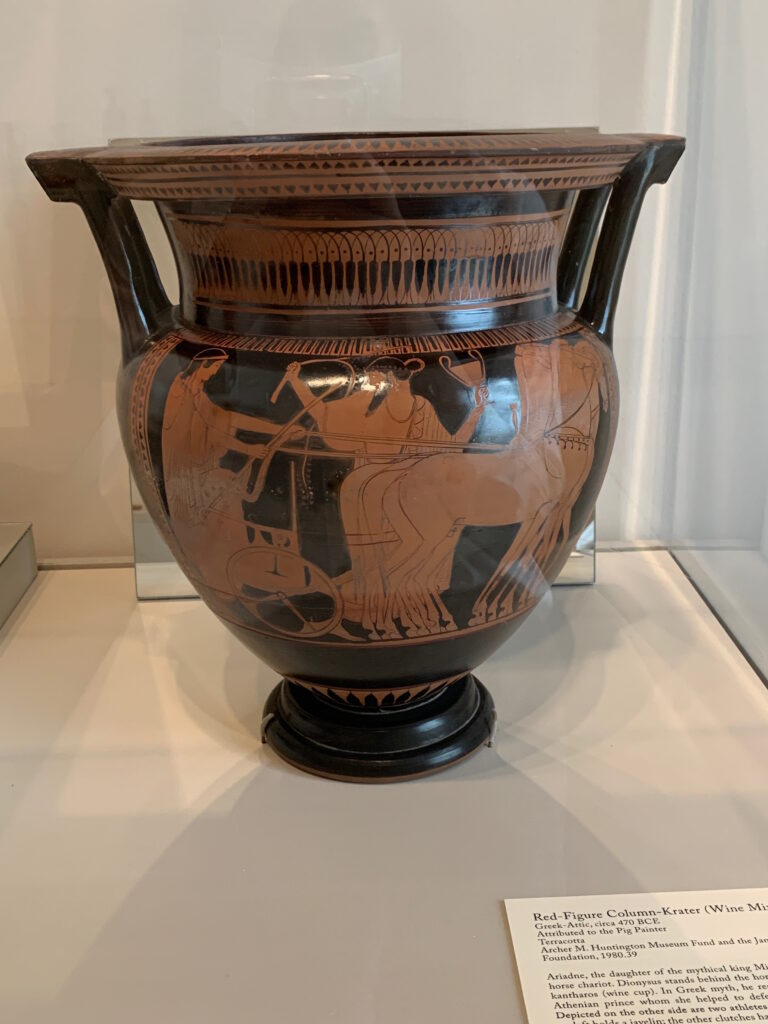 I.  Artist: This work is attributed to an Athenian red-figure vase-painter, whose name is uncertain. However, the painter’s name is thought to be Pig Painter, a name that was inspired by images of swineherds that the artist painted on pelike, which is currently located in the Fitzwilliam Museum Cambridge. Certain stylistic characteristics have led to a belief that this artistic identity has also done several other vases throughout 480 BC-460 BC. [1}

III. Location on Campus: Blanton Museum of Art on The University of Texas campus, Ancient Greek and Roman Art room (first piece – right across from the mezzanine)

IV. Acquisition: This Red-Figure Column Krater (Wine Mixing Vessel) was one of the many pieces donated in 1980 by the Archer M. Huntington Museum Fund and the James R. Dougherty, Jr. Foundation It is believed that Huntington’s interest in offering an art venue to the school was sparked by his wife Anna Hyatt’s sculpture Diana of the Chase. As discussed previously in class this donation of his can be found in the honors quad. In 1927, he donated 4,300 acres of land to UT Austin, which kicked off the Blanton Fund, which has since funded the krater collection and many other permanent pieces inside The Blanton Museum of Art. The Huntington legacy still lives on today and it is displayed through one of the finest university’s campus-based art collections.

V. Description: European Greek-Attic, terracotta red-figure column-krater (wine mixing vessel), 40.5 cm (15 15/16 in). Red-figure art is a pottery form of Greek vase painting that originated around 530 BCE in Athens. The style is distinguished by drawn red figures and a black-painted backdrop. Designs could be painted directly onto the vessel after it has dried rather than scraped out, allowing for further detail than in black-figure pottery.

Ariadne, who is the daughter of Minos and displayed on the left side, is displayed stepping into a quadriga, also known as a four-horse chariot. Ariadne is identifiable through her typical Minoan clothing, long layered dresses with short sleeves, and her crown that was given to her by Dionysus. Displayed in the center of the piece, Dionysus is holding a vine branch and kantharos (wine cup) in each of his hands, respectively. Dionysus is known to be the god of wine and drunken revelry, which is why many wine vessels would contained themes of Dionysus utilized to consume and collect alcohol. [2][3] Since Ariadne and Dionysus are related by the myth of Theseus, these two mythological figures are depicted together on this wine-mixing vessel or krater. Ariadne played a huge part in Theseus’ victory over the Minotaur.[4] Dionysus then encounters her and rescues her. In some myths, this is what leads to Ariadne becoming Dionysus’ wife. [5] Therefore, she is shown driving the quadriga upon her return because historically goddesses responsible for victory, such as Nike, are suggested to lead the chariot. [6] The use of the quadriga in ancient Greek athletic games and as a symbol of victory is of importance given the image of the scene on the opposing side of the piece.[7]

On the opposing side of this piece, two athletes training with a specialist is shown. The individual on the left is holding a javelin, while the other is holding halteres (jumping weights). The dressed man in the middle is the trainer, as shown by the forked staff. [8] Since this piece is associated with the myth of Theseus, this scene clearly depicts that of Greek ephebos (an adolescent young man of the age of training in Athenian culture). It can be interpreted that the human malefactors are in training following Theseus’ story with the Minotauros. This symbolizes the principles of Athenian education and the heroic nude represents the ideal muscular body built in the Greek gymnasion. Given the importance of the gymnasion to the bodily and physical education of Athenian ephebic youths, Theseus’s story with the Minotauros could symbolize the ideals of Athenian education. Theseus’ victory over the Minotaur may indicate the superior quality of the Athenian physical and mental education of their young men, given that much of ephebic training was in readiness for civic and military service. [9] In this instance, these column-craters are likely associated with victories in Greek athletic games. However, the intended use for the kraters is still speculated. For example, they could have been created to serve as reward to those who finished second or for other game events. They were potentially used as commemorative practical vases for festivities after Panathenaic victories. Or lastly, they could have been used as model samples of pottery art in workshops.[10]