↓ Skip to Main Content
Home › Country Profiles › Rumor has it: China in Vanuatu

Rumor has it: China in Vanuatu 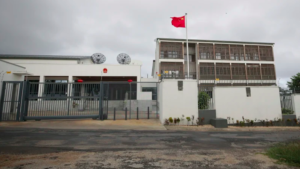 The Chinese embassy in Vanuatu (Credit to Alex Ellinghausen)

Is it a naval base? A wharf? A commercial port? A space tracking station? Beijing’s plans in the small South Pacific island nation Vanuatu have been under intense speculation in recent years. Given China’s worldwide interest in expanding its maritime security footprint, this incident fits into a larger narrative of close interest in strategic developments.

Doth protest too much?

In April 2018, the Chinese foreign ministry responded to a supposed source disclosing preliminary talks about a military base in Vanuatu “completely out of line with the facts”. Chinese government spokesman Geng Shuang described it as: “One word, fake news”. Still, other Chinese officials called reports “sheer fiction”.

Lowy Institute expert Jonathan Pryke said the project had “raised eyebrows in defense, intelligence and diplomatic circles” in Canberra because it could host naval vessels as well as cruise ships. Other experts speculated that possible lunar mission in the 2030s could be motivating the Chinese, who would be able to test rockets from a space tracking station in the South Pacific.

Of Rumors and Reality

What is a rumor? Though rumor has been well-explored in sociology, anthropology, and psychology, the disciplines of political science and international relations are just beginning to take up this topic. Scholars are attempting to distinguish between rumor and other speech acts–(utterances that have a communicative function, as per Center for Advanced Research on Language Acquisition)- notably gossip, conspiracy theory and urban legend. Even before the genesis of “fake news” and the era of mis- and disinformation, rumor has been a sticky category. How to define what a rumor is or is not without making a moral judgment about the veracity of the claim? If a rumor is unconfirmed information being shared between parties, whose role is it to do the confirming? What constitutes solid evidence? If we consider “rumor” to be a circulating piece of information of dubious truth, we must engage in judgment of  what is true. Also, pertinent to the case at hand, we must limit the time frame: when was it true? Might it eventually be true?

Though rumors may not be true in a strictly factual sense, there is a truth in how actors perceive them. The claims may not be real in weighing outcomes, but other states may take very real actions in response to rumored developments. The level of uptake a rumor has, either its believability, press coverage, may speak to anxieties and reflect the status quo in important ways. Rumor, may communicate in ways much like any other speech acts do, by revealing values and normativity. 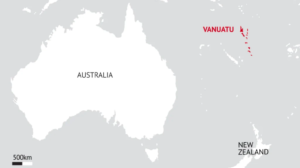 Vanuatu consists of 80 islands and is home to 270,000 people. The Lowy Institute Pacific Aid Map shows China leading the pack amongst international donors to Vanuatu, spending just shy of $100 million dollars in 2017, more than Australia, New Zealand, and the World Bank combined. The country’s debt-to GDP ratio is around 30%, half of which is owed to Beijing– roughly $220 million dollars. Vanuatu was the first Pacific nation to recognize China’s territorial claims in the South China Sea and has historically supported Beijing on the issue of Taiwan. High-profile state visits and new direct flights from Shanghai and Beijing to Vanuatu starting this year signal increasingly close ties between the archipelago and China.

The Santo Island wharf isn’t China’s first construction project in Vanuatu. The major airport’s longer runway, convention center, stadium, and many roads and government buildings have been funded by Chinese banks and built by Chinese companies. Some are questioning whether the new Santo Island project could be seized directly by China in the case of default, like what occurred with Sri Lanka’s port through a “debt equity swap”. Even without a debt equity clause in the contract, increasing indebtedness could leave Vanuatu vulnerable to pressure, particularly if a natural disaster or other emergency hinders re-payment. Others, though, continue to speculate that the wharf could have dual commercial-military use at some point.

Despite the region’s small population, the strategic location and opportunities for development assistance have attracted a renewed Chinese interest in infrastructure and economic cooperation as part of the Belt and Road Initiative. As rising sea levels make costly environmental engineering or relocation efforts a looming necessity, China has already proven a willing funder.

Vanuatan officials, amidst scrutiny from the United States, Australia, and New Zealand, have publicly released the contract they signed with China in 2014 resulting in the wharf’s construction. Further, they have defended the need for a commercial port to host cruise ships and shipping liners to support the burgeoning tourism and agricultural export industries.  Foreign Minister Ralph Regenvanu of Vanuatu said: “The loan was considered economically viable for such infrastructure as the main gateway for international trade between the northern part of the country and the rest of the world.”

The severe climate risks that threaten Pacific islands are not just an environmental or humanitarian issue. The lack of security attention in the region is set to change as China makes inroads in offering infrastructure assistance, climate mitigation efforts, and disaster prevention. Oceania is rich in natural resources and intersects vital sea routes, aside from the attraction of the strategic location for security posturing.

The increasing rumors around Chinese encroachment in Vanuatu, and in myriad other cases my classmates cover on this blog, show us an area of limited information and uncertainty. Ralph Rosnow, a scholar of rumor, has argued that rumors are “barometers of tensions in the community” that predict human behavior. This story clearly hit a nerve, revealing a divide over China’s role in Oceania. So long as China’s standing on the international stage and its role in the region grow, there will be speculation about new interactions with Pacific island actors. Despite the wharf opening for business last year, this story is still one to follow.