(This blog post kicks off my three-part series on France’s role as a stakeholder in our considerations of grand strategy in managing climate resilience and disaster risk in Oceania.)

France is an important security and development actor in the Pacific region. Given its extensive colonial history and ongoing role in governing its three remaining territories, as well as its key role within the FRANZ partnership that has coordinated emergency humanitarian response in the South Pacific between France, New Zealand, and Australia since 1992, it’s hard to understand the geopolitics of the region without an eye on Paris. Looking ahead to French President Emmanuel Macron’s delayed visit to French Polynesia in spring 2020 for the One Planet Summit to focus on environmental issues, below I review key historical context, contemporary issues, and the status of climate negotiations. 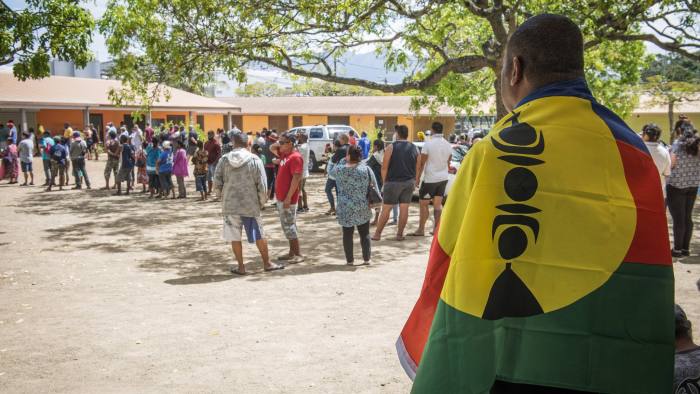 Citizens in Noumea, capital of New Caledonia, wait in line to vote in the independence referendum on November 4, 2018. Voters decisively rejected severing ties with the former colonial power.

The France empire is a topic far beyond the remit of this blog post: a centuries-long exercise in exploration and exploitation motivated by the mission civilisatrice. As Napoleon III focused on expanding the French presence in then-Indochina in the mid-to-late 19th century, trips to the Pacific Islands evolved from the missionary trips that had occurred sporadically since the 17th century to outright conquest. Between the Scramble for Africa period where France, the United Kingdom, Germany and Belgium divided up the African continent and World War I, France established a series of colonies and protectorates in the Pacific islands.

As part of the grande nation, the Pacific Islands, much like Caribbean Island outposts and the major colonial hubs in Africa and Asia, were incorporated into global trade under the auspice of Paris. Not only did resources and raw materials get exported from the islands, people were an import. Indentured workers under the corvée (forced labor) system were brought to plantations in New Hebrides, now Vanuatu but then a joint colony of the United Kingdom and France, and to nickel mines in New Caledonia. The term “blackbirding” described the abduction of Pacific Islander people from New Caledonia, the Loyalty Islands, New Hebrides, New Guinea, and the Solomon Islands for sale into the slave trade for the sugar cane plantations in Fiji and Queensland. Later, World War II would bring thousands of soldiers fighting in the Pacific front. This focus on the people dimension of imperialism is significant as Europeans introduced diseases like smallpox and measles to the region, wiping out untold numbers of native islanders.

From Colonies to Territories

Due to demands for French citizenship for its colonial subjects in Africa, France established Territorial Assemblies and eventually allowed some colonies to have representation in the French National Assembly. Though the Pacific Islands are a relatively minor player in the story of decolonization after World War II, New Caledonia, French Polynesia, and Wallis and Futuna became Overseas Territories and their populations French citizens in 1946. Vanuatu became independent from Anglo-French control in 1980. Though France has a past colonial relationship with the Republic of Vanuatu and maintains ownership of an uninhabited coral atoll, Clipperton Island, but for our purposes we’ll focus on New Caledonia, French Polynesia, and Wallis and Futuna. The first is a collectivity (Pays d’Outremer) with more status whereas the latter two are territories (Territoire d’Outre-Mer) with a lesser degree of autonomy.

France governs its overseas territories, departments, and collectivities under the auspice of the Minister of Overseas France. For comparison’s sake on contemporary arrangements, the United States continues to maintain Compacts of Free Association with the Federated States of Micronesia, Palau, and the Marshall Islands, as detailed by Andrew here. France considers itself “a nation of the Indo-Pacific”, governing 1.5 million French citizens and 93% of the region’s exclusive economic zone.

It’s important to remember that while total aid from all national and multilateral actors totals $2-3 billion US dollars, France sends more than that to its territories annually.  These subsidies are paid to French Polynesia as compensation for past nuclear testing, New Caledonia for nickel revenues and as a condition of its remaining French, and Wallis and Futuna since it is a “dependency” of France. This isn’t considered aid, so these funds won’t show up in many of the data sources we’re using to consider development in this region in our research, like the Pacific Aid Map from the Lowy Insitute.

In November 2018, a referendum to establish New Caledonia as an independent state was defeated by voters. With turnout exceeding 80 percent, New Caledonians elected to remain a French territory. Set into motion by the 1998 Noumea Accord, this vote marked the high-water mark of the 30-year peace process in the country aiming to settle long-standing tensions between the indigenous Kanak population and French settlers. The  violent hostage crisis in Ouvéa cave in 1988 that resulted in 21 deaths is an important memory in the French consciousness. Prior to the referendum, President Macron made a high-profile visit to the island nation carefully timed to mark three key anniversaries of the secession movement in the French territory, remarking that the “pains of colonization” remain and honoring “dignified” efforts for Kanak autonomy but concluding that “France would be less beautiful without New Caledonia”. With just shy of 300,000 people, ethnic Melanesians constituted 39% of the population in 2014, followed by those of European descent at 27% according to the CIA World Factbook.

As far as French Polynesia goes, the recent prospect of a legal challenge brought the eyes of the world to the French role in the South Pacific. The former President of the territory, Oscar Temaru, brought a case to the International Criminal Court (ICC) for alleged “crimes against humanity” over nuclear tests conducted by France between 1960 and 1996. The fact pattern states that the atolls of Mururoa and Fangataufa were the sites of 193 nuclear tests over three decades until then-president Jacques Chirac ended the program in the 1990s. Temaru, a supporter of Polynesian independence, accused France of “ignored and shown contempt” for his offers since 2013 for a UN-negotiated settlement to compensate Polynesian citizens who suffered health complications as a result of the nuclear tests. Since 2010 France has had a law allowing for veterans and others whose cancer could be attributed to the testing to file claims, but only about 20 of 1,000 complaints have resulted in compensation. Though it is still yet to be seen whether the Court will accept the case, the Minister of Overseas France, Annick Girardin, has critiqued the lawsuit as being an abuse of the ICC for domestic political purposes.

Paris and the Paris Agreement

For the French territories in the Pacific, rising temperatures are an existential question. Upwards of 10 million people live on the 25,000 islands that make up Micronesia, Melanesia, and Polynesia (over 7 million of these live in Papau New Guinea), and climate change puts their homes and livelihoods at risk of inhabitability. Salinization of the water supply, coastal inundation, and destruction to increasingly extreme natural disasters are three major concerns. As we weigh what climate migration will look like, whether that be managed retreat or forced evacuation, and what rights citizens have to relocation and humanitarian assistance, France certainly has a major stake.

The United States is on track to withdraw from the Paris Agreement in 2020 even, if the new President-elect is able to prevent that, the US is unlikely to meet its self-determined emissions targets. Despite this, France continues to be a symbol of the developed world’s commitment to global warming to just 1.5 degrees Celsius over the pre-industrial baseline. A recent New York Times feature showed the dramatic effects of sea-levels projected for the year 2050 around the globe.

The governments of these island states are taking steps individually to mitigate these risks change and plan for their peoples in the event of relocation. Several of these low-lying Pacific countries and territories have joined together to ask the international community not to turn a blind eye to their plight on the “frontlines” of climate change. The Suva Declaration, drafted by the representatives of Fiji, the Marshall Islands, and several other Pacific island states in 2015, pushed for ambitious goals for the during the COP21, including climate financing mechanisms and the modest global temperature rise of 1.5 degrees Celsius.

Though representatives of the French territories in the Pacific attend these conferences, it’s unclear to me whether they are hamstrung by their lack of statehood (and thus, role as independent states on the world stage) or whether their status as part of France, a major climate leader and permanent member of the UN Security Council amplifies their perspective. Do other states accept France’s assertion that it is a Pacific nation with some frontline stake in climate change or is this a vestige of colonialism?

The UN climate summit in Madrid, COP25, ongoing at the time of writing, started with UN Secretary-General Antonio Guterres warning that the world is at a “point-of-no-return” due to the major economies efforts to reduce their carbon emissions being “utterly inadequate”. 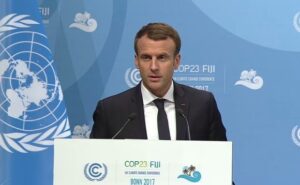