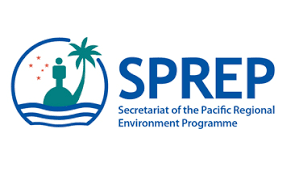 The Secretariat of the Pacific Regional Environment Programme began a five year initiative titled the Pacific Ecosystem-based Adaptation to Climate Change Project (PEBACC). This initiative includes the governments of Fiji, Solomon Islands, and Vanuatu and through this project, these governments are able to collaborate with one another as well as with other international organizations to increase resilience to climate change through natural ecosystems.

A primary goal for PEBACC is to identify ways to use ecosystem-based adaptation (EBA) to developing climate resiliency. By taking this approach to adaptation measures, PEBACC capitalizes on existing local knowledge about the ecosystem’s role in climate resiliency and allows participating governments to collaborate and find the most effective ways to respond to climate change.

PEBACC works on varied initiatives both within individual countries and collaborations between countries. Recently, it sponsored a learning exchange between Fiji and Vanuatu that focused on mangrove planting and sustainability techniques. Mangroves are native to many islands in Oceania, as well as tropical and subtropical regions throughout the world. Notably, Sri Lanka’s mangrove forests have proven to help protect the island in the case of tsunamis, inspiring Sri Lanka to become the first state to make a national declaration to protect all of its mangrove forests. 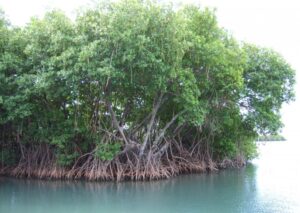 Mangroves differ from other trees by nature of growing along coastlines with roots that thrive in seawater. Because mangroves take up coastal real estate, many forests have been lost due to human development, from repurposing the coasts for agricultural or urbanization projects. Sri Lanka’s Mangrove Conservation Project notably works to both protect existing mangrove forests and replant mangroves to replace those that were cut down. Sri Lanka is not the only island state that has seen the importance of conserving these trees.

In a learning exchange between Fiji and Vanuatu, Vanuatu’s Senior Forest Officer, Presley Dovo, visited Fiji with his staff to learn about techniques the Fijian Ministry of Forestry uses with regard to mangroves. Alongside Conservation International, the Ministry of Forestry took the staff from Vanuatu around Fiji to demonstrate strategies for replanting mangroves and selecting which mangrove species to use. According to Dovo, this exchange provided new ideas about how to protect new mangrove growth, such as placing fencing around seedlings to prevent them from being overrun with debris. 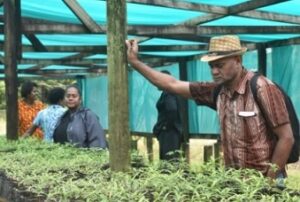 This type of learning exchange could be instrumental for participating governments in responding to pending climate concerns. According to guidelines published in conjunction with the World Bank and WAVES partnership, mangrove rehabilitation and replanting could provide significant protection from tsunamis, storm surges, and wind and swell waves. This is particularly true in instances where dense mangrove forests grow between the coast and settlements. While mangroves won’t be a panacea for coastal concerns, they could mitigate damages associated with storm surges, flooding, etc. 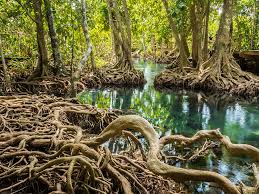 As PEBACC stems from the Secretariat of the Pacific Regional Environment Programme (SPREP), the goals of the project align with the goals of the organization as a whole. In particular, SPREP emphasizes the need for collaboration and partnerships, in order to be financially efficient and to allow for a diverse knowledge base. This emphasis on collaboration allows participants to use governmental and non-governmental resources and experts to address climate concerns, particularly through individual projects, such as the aforementioned learning exchange.

SPREP serves as a good example of how states within Oceania are collaborating on adaptation measures. A significant amount of efforts towards adaptation do not come from a unilateral approach, but use cooperation and coordination between governments, NGOs, and other international actors. Collaboration is a key component in a region populated by small states with huge climate concerns. Various governments within Oceania have joined intergovernmental organizations such as SPREP or the Melanesian Spearhead Group mentioned in a previous blog post. By combining existing knowledge and resources and working together to communicate with the international community as a whole, states within Oceania are expanding their opportunities for adaptation and resilience. This coordination also comes with participation from other international organizations, whether through providing funding or assistance for projects such as the learning exchange. In the learning exchange, staff from Conservation International also took notes from efforts by the Fijian Ministry of Forestry.

For states within Oceania, a varied, collaborative approach to resiliency and adaptation provides governments with effective, cost-efficient options. Pooling resources and knowledge throughout the region allows governments to continue responding and adapting to climate change through projects such as replanting and rehabilitating mangrove forests, which may seem small in scale, but could have huge impacts for reducing destruction caused by storms. Organizations like SPREP appear to be positive options for governments, especially because the international focus of the organization allows for regional and international collaboration.