Brazil is the third largest emitter in the developing world, but their emissions profile is unique; the majority of their emissions come from deforestation of the Amazon (estimates hover around 70%). In 2004, the Brazilian government implemented aggressive policies to tackle this issue, and the progress has been remarkable–deforestation rates declined by 64% between 2004 and 2009. How did they do it? And, perhaps more importantly, can their policies be successfully transferred to other countries with high LULUCF emissions?

Brazil’s success stems from the implementation of its Action Plan for the Prevention and Control of Deforestation in the Legal Amazon or PPCDAm. The plan was originally implemented in 2004, when high beef and soybean prices caused a sudden spike in deforestation rates, throwing environmentalists the world over into a state of panic. The subsequent PPCDAm introduced a radical multi-sectoral and inter-ministerial environmental policy, that called for coordination between federal, state, and local governments, as well as outside organizations. The plan involved three main components: 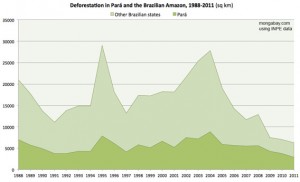 Deforestation rates of the Brazilian Amazon have steadily decreased since 2004 (mongabay.com/INPE).

Impressive as PPCDAm’s progress has been, Brazil is still a major emitter. The major challenge now is deforestation caused by small scale famers, who often receive certain exemptions from the environmental conditions under the credit schemes and are difficult to detect using monitoring systems. This poses a more difficult problem, because, despite being disconnected from energy use, Brazil’s emissions are intricately tied to economic growth. The health of Brazil’s agricultural sector is integral to their economic prosperity, which implies the need for increased productivity or increased land use. By encouraging the the use of farming and grazing techniques that increase productivity, especially among small-scale farmers, the government could further decrease deforestation rates.

Despite recent policy setbacks, PPCDAm has been a huge success. Can Brazil’s success be exported?

Probably not yet. The entire model is contingent upon government capacity, especially in terms of technology and law enforcement. Many of the countries with significant LULUCF emissions have relatively weak government capacity, especially when it comes to law enforcement in remote areas. Indonesia, for example, has tried to control illegal logging through regulatory policies, but has run into a lot of trouble enforcing these policies. An appropriate step for many of these countries may be to develop a monitoring system, similar to DETER. This is especially viable for countries that have signed VPAs with the EU, and are therefore guaranteed the EU’s support in “improving their regulation and governance of the [forestry] sector.”