Apparently, where you build renewables matters more than how much capacity you build. According to the results of a 2013 paper published in the Proceedings of the National Academy of Sciences, the amount of carbon dioxide, SO2, NOx, and PM2.5 displaced by renewable energy generation varies widely across the United States. 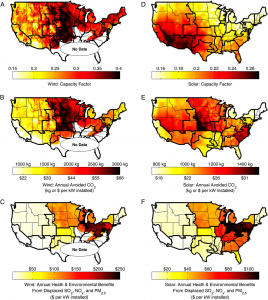 Using the Air Pollution Emission Experiments and Policy analysis model, the researchers were able to put a dollar amount on the regionally specific costs of damages from SO2, NOx, and PM2.5. Next, they combined dollar per ton damage values for each pollutant with plant-level emissions data from 1,400 fossil-fueled power plants for 2009 through 2011. Finally, they used regressed-hourly emissions and generation data to calculate the emission displacement from wind and solar in 22 sub-regions (pre-defined by the EPA).

The amount of C02 and pollutants displaced varies because of the carbon and pollutant intensity of the underlying power sources. If you replace natural gas with renewables, there are fewer climate, air pollution benefits than if you replace coal. In their final analysis, the researchers calculated that “By displacing SO2, NOx, and PM2.5 from conventional generators, a wind turbine in West Virginia avoids $230 in health and environmental damages per kilowatt per year ($81/MWh)—7 times more than a wind turbine in Oklahoma and 33 times more than a wind turbine in California.” This study provides very compelling evidence that regional policies can be much more effective than national policies for renewable energy development.

One such policy is the Renewable Energy Production Tax Credit (PTC), which expired on December 31, 2013. The PTC was a corporate tax credit originally enacted in 1992 and renewed by the American Recovery and Reinvestment Act of 2009 and later by the American Taxpayer Relief Act of 2012.  According to the Database of State Incentives for Renewables and Efficiency (DSIRE), the PTC was “a per-kilowatt-hour tax credit for electricity generated by qualified energy resources and sold by the taxpayer to an unrelated person during the taxable year” up to 10% of the amount paid for the renewable installation.

The PTC is credited with fueling the explosive growth in wind installations in the United States. By one estimate, since 2009, wind accounted for 36% of all new electricity generation installed in the US and now supplies more than 4% of electricity in the US. One key indicator that the PTC is largely responsible for recent US wind development is the drastic uptick in the number of projects started before the December 31, 2014 deadline.

According to an analysis by the American Wind Energy Association, renewable developers installed over 5 GW of wind capacity in Iowa and California and over 12 GW of wind capacity in Texas under the PTC. Due to the program’s overwhelming success, the US Congress decided that the domestic wind industry was mature enough to let the credit expire at the end of 2013. This is not the first time the PTC has expired. Congress allowed the PTC to expire in 1999, 2001, and 2003, only to renew it each subsequent year. The uncertain and political nature of the PTC makes long term investments by wind developers particularly challenging.

However, when we look at the regional health and environmental benefits of the PTC, things may look less rosy for the climate. According to the PNAS study, “the combined health, environmental, and climate benefits from wind energy in Ohio are $100/MWh—more than four times the subsidy—compared with only $13/MWh in California”. Perhaps the next round of subsidies (if there are any!) should target wind development in Indiana, Ohio, and West Virginia, where wind can displace the most pollution from fossil fuel fired generators.