The time is ripe to tap Argentina’s vast, world-class shale resources as American, European, and Chinese oil exploration companies flock to the Vaca Muerta formation, found in the Neuquen Basin. Discovered in 2010 by the Spanish-Argentine joint venture, Repsol-YPF, the Vaca Muerta formation is estimated to have 16 billion barrels of recoverable oil and 308 trillion cubic feet of gas, making it the second-largest shale gas deposit and the fourth-largest shale oil reservoir in the world.

Argentina is home to the world’s third-largest shale gas reserves, but lack of fracking expertise and technology leave the country dependent on foreign investment for extraction. The scale of the formation and capital requirements make foreign funding and expertise absolutely vital. However, strict economic policies at home, namely energy price controls, have tended to dissuade foreign oil companies from investing in large-scale exploration and extraction projects.

The Fernandez government’s April 2012 expropriation of Repsol’s (Spain) 51% stake in YPF was provoked by a lack of investment by oil companies and a declining overall energy output by Argentina. Since the expropriation, the country has increased fuel imports and  generated a $5.4 energy trade deficit this year. YPF, the Argentine state-owned oil company, has announced an overseas bond offering to finance a five-year investment plan of $37 billion to develop Vaca Muerta, offering “incentives” to companies that invest $1 billion or more (such as export tax exemptions and revenue mobility). 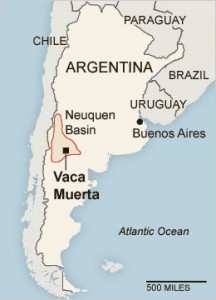 Only one year after its nationalization, YPF now has the ability to attract the highest bidders from around the world, eager to reap the benefits of this rich and largely untapped resource. The first step for YPF was the signing of an MOU with Chevron in July, its first partnership for Vaca Muerta development, finalizing a $1.5 billion deal. It has not taken long for other players to catch on. Dow Chemical Co.’s Argentine unit signed an accord to invest almost $200 million and Germany’s Wintershall has singed a letter of intent for a joint venture with the Neuquen province oil ministry. Mexico’s Pemex, Russia’s Gazprom, and Chinese companies are also expressing interest. Repsol CEO Antonio Brufau commented bitterly, “without Vaca Muerta, YPF would still be ours.”

The implications of the discovery and potential partnerships are clear for markets: the expansion of global petroleum supplies; the graduation of Argentina as a major exporter; the draw of diverse capital-based foreign investment to Argentina; and the possible lowering of historically high Argentine consumer energy prices. But what implications could this have for climate change?

Argentina currently ranks 19th in the world for CO2 emissions accounting for 0.81% of total emissions. After experiencing a severe recession from 1999-2002 and an acute crisis in 2001 in which over half of the population fell into poverty, the government’s policies have focused on economic recovery and growth; climate change has not been a priority. While it has enacted legislation to promote biofuels, energy efficiency, renewables, and low carbon funding, carbon-based energy sources remain the most important temptation for the Argentine government. Argentina’s immense oil and gas reserves provide a perfect opportunity to attract foreign investment and pursue large-scale economic development at low cost.

Patagonia is facing the consequences of climate change with average temperature rising nearly one degree Celsius in the past 50 years. Heat waves, destruction of biodiversity, and melting of glaciers are all evidence of this increase. Environmentalists have already begun scrutinizing the Vaca Muerta project for the threats it poses to water sources due to fracking. However, the question remains: Can Argentina pursue cleaner natural gas that could serve as a springboard to earn more revenue as an exporter to then invest in more renewable and low-carbon intensive projects?

The country’s landscape and geographic features provide enormous potential for renewables, especially wind and solar. However, only a small amount of the renewable grid has been connected. Due to political and economic risk, companies that are not large oil and gas multinationals (i.e. renewable companies) are going to think twice about investing in a country known for recession and expropriation.

Incentives for Argentina to promote large renewable investments remain to be seen. Oil and gas revenues are all too enticing for a revenue-starved government with a significant energy deficit. Investment in renewables will have to be financed by American and European companies. To mitigate political risk, international development banks, as well as public and private insurers, must step in to support these projects. If the Argentine government can be influenced to seriously pursue sustainable energy, much could be done with newly generated revenue from its shale reserves.

Companies are going to invest in and exploit Vaca Muerta. There is no escaping this fact. How much emphasis is given to natural gas and how Argentina decides to use revenues will be pivotal for a country with the ability to be a major player in greenhouse gas emissions reductions in Latin America.