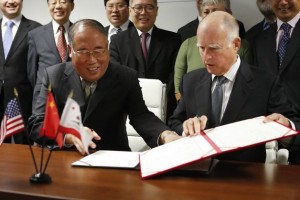 On September 13th, two of the world’s largest economies signed a memorandum of understanding (MOU) to “enhance cooperation in an effort to combat greenhouse gases and carbon emissions”. While MOUs on climate change may not be new to the arena; this event in particular stands out. The two economies in play are China, a nation, and California, a state.

The MOU signed between Jerry Brown, Governor of California, and Xie Zhenhua, Vice Chairman of the National Development and Reform Commission of the People’s Republic of China (NDRC), is unprecedented; it is the first MOU the NDRC has ever signed with a subnational entity. In entering bilateral collaborations with California, China demonstrates it recognition of the role sub-national players have in the fight against climate change, its willingness to look beyond existing multinational platforms and its enthusiasm to work with actors of all kinds on this pressing issue.

California has the world’s 8th largest economy, tied with Italy and Russia. Despite its size, California’s energy consumption per capita has remained relatively stagnant since the 1970s. New initiatives such as a cap-and-trade system (second only in size to the European Union’s emissions trading system) instituted in November 2012 illustrate the state’s commitment to curbing climate change and its dedication to developing solutions for global warming.

China is one of the world’s biggest emitters of greenhouse gases and its citizens are suffering greatly by the effects of its pollution. However, China is increasingly receptive to new technology and offers an environment for great strides to be made in “energy technology, energy efficiency programs and other sustainability measures”. The collaboration offers great potential in shared learning and in making a dent in tackling global greenhouse gas emissions.

A product of over a year’s worth of bilateral talks, the MOU details the establishment of a task force co-chaired by senior officials from both governments to oversee activities that cover:

The MOU is designed to complement the new federal agreement signed between the US and Chinese government in July 2013. It builds upon existing trade relations between both parties, presenting the possibility for a multi-layered approach to bilateral agreements tackling the global issue of climate change.

To date, climate change mitigation talks largely revolve around forums or arenas such as the 2009 Copenhagen Summit where many countries are included in the conversation, often resulting in lots of time spent arguing and negotiating rather than identifying solutions and making pledges. The use of bilateral agreements potentially sidestep political controversies of the UNFCCC process and allows those involved to find areas of mutual interest. Taking it a step further and bringing in state-level players into the conversation allows more concrete solutions to be shared and more practical learning to be had.

In the case of China, a national-to-subnational agreement takes into consideration the top-down hierarchy of the Chinese political environment. California has achieved great success in curbing its greenhouse gas emissions and offers practical lessons for its Chinese provincial counterparts. In a government like that of China’s, working with the NDRC at the national level allows greater impact and legitimacy to the sharing and possible actions proposed from this agreement. Were California to have signed an agreement with Beijing directly, there would be no guarantee that the activities and proposed actions would be accepted by the Politburo of the Communist Party of China. Without their consent, the government of Beijing is limited in what it can actually do.

In a world with different government regimes, developing agreements at various levels of government whether it is state or provincial, can have a greater impact. Whether the China-California partnership will truly make a difference or yield better results than existing agreements is unknown. However, the willingness of both parties to enter into an unprecedented level of agreement indicates a commitment to tackling the issue of climate change. If what exists is not working, we must be innovative and develop solutions that may provide actual results before it is too late.