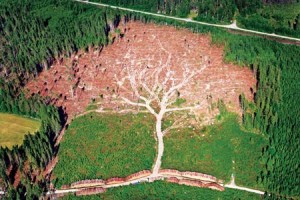 According to the UN Climate Change Secretariat, Land use, land-use change and forestry (LULUCF) is defined as “A greenhouse gas inventory sector that covers emissions and removals of greenhouse gases resulting from direct human-induced land use, land use change and forestry activities.” UNFCCC states that terrestrial ecosystem vegetation and soils can serve as a natural sequestration mechanism for carbon thus slowing the rate of build up of CO2 in the atmosphere. Such mechanisms that remove greenhouse gas (GHG) from the atmosphere are referred to as “LULUCF sinks.”

Forestry issues include conversion of forests to pastureland, logging, forest fires, and mass infrastructure development. These have led to the 2008 creation of a set of steps by the UN called Reducing Emissions from Deforestation and Forest Degradation (REDD). The REDD program mobilizes the expertise of the Food and Agriculture Organization (FAO), the UN Development Program (UNDP), and the UN Environment Program (UNEP) to streamline policies and efforts that reduce GHG emissions from deforestation and forest degradation. The program uses market and financial mechanisms, mobilizes engagement of indigenous peoples and other forest dependent communities, and provides research analysis and implementation tools to its 48 partner countries in Africa, Asia-Pacific, Latin America, and the Caribbean.

According to IPCC reports, LULUCF’s share of total GHG emissions is over 30%. Interestingly, the sector also has some of the greatest potential for mitigating climate change. Currently the major LULUCF emitters are Brazil, Indonesia, Malaysia, Democratic Republic of the Congo, and Central African Republic. The European Union is one of the major abating countries in this sector and could serve as a general model or source of research and support for developing countries. It is no surprise that the major emitters are developing countries and several challenges present obstacles to implementing significant emissions reducing policies.

Valuation methods represent a major set of implementation uncertainties in LULUCF and REDD. Skeptics argue that numbers regarding forest locked-up may not be credible and that emissions reductions may not be permanent. Developing countries have the most potential to make headway in GHG emissions reductions resulting from land-use but technical issues, lack of information, land’s link to other critical development issues, and poor governance especially in the forest sector and the major walls that these countries face.

Incentivizing participation in the REDD program as well as the adoption of policies to reduce deforestation is another barrier leading policymakers to wonder how likely countries are to not cut down their rainforests when they are paid not to. Finally, loopholes in the UNFCCC’s LULUCF legally binding rules have led countries to use perceived emissions reductions from forests to offset increased coal and fossil fuel pollution, leading to a possibly worse-off aggregate effect.

The true challenge lies in the financing of LULUCF and REDD programs. There are several proposals for REDD financing mechanisms that our future research will focus on. In general, possible funding sources include official development assistance (ODA), public-private partnerships, payment for environmental services (PES), establishment of funds, and market mechanisms. Non-market mechanisms, while helpful in the short-run, are insufficient. ODA from individual countries and multi-laterals is quite limited. In contrast, market-based plans that promote private sector participation have the potential to be long-term and sustainable, while also having more power to incentivize.

The land use sector has enormous potential for climate change mitigation and implementing cost-effective policies can reduce the developing world’s ecosystem vulnerability. The environmental and socioeconomic benefits of land management are clear in the long-term. As stated earlier, several key challenges (governance, coordination, loopholes, and funding) threaten LULUCF’s mitigation potential. Nonetheless, LULUCF will play a vital role in any global climate change mitigation regime and it is possible to improve the existing UNFCCC framework in terms of accounting, implementation, and compliance.