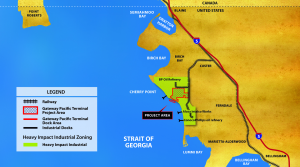 One of the most fiercely contested U.S. elections this November is taking place in Whatcom County, Washington. On November 5, Whatcom county voters will go to the polls and elect four of the seven total members to represent them on the County Council. Normally, this process would only interest the residents of Whatcom County who want better septic service and lower property taxes, but this election cycle stands out because it has attracted unprecedented campaign contributions from donors outside the state.  These donors have taken a significant interest in a proposed coal export terminal, whose fate will be determined by a seven member county council when they vote whether to issue the facility a shoreline permit for construction. The outcome of that council vote could change the global market for coal, humanity’s most commonly burned fossil fuel.

There are currently twelve existing coal export terminals in the United States, but only one on the West Coast which is located in the Port of Los Angeles. Six projects have been proposed, mainly in the Pacific Northwest, but they have all faced fierce opposition from environmental groups. Three proposed export terminals in the Pacific Northwest have already been scrapped by developers in the past year. The next terminal on the chopping block is the Gateway Pacific Terminal located in Cherry Point, a heavily industrialized coastal region in Whatcom County, Washington. If completed, this terminal would receive around the clock shipments of coal via trains from the Powder River Basin in Wyoming, bound for lucrative Asian markets. Wyoming’s Powder River Basin currently produces around 400 million tons of coal annually, but in light of weakening demand for coal in the domestic U.S. market due to natural gas prices and strict environmental regulations, export terminals to Asia are integral to the coal mining industry’s survival. If approved, the Gateway Pacific Terminal would export 54 million metric tons of coal per year, dwarfing the 0.3 million tons of coal which currently leave the U.S. for Asia from the Los Angeles Terminal.

Cherry point, a strip of coastland nestled on a deep-water channel in the extreme upper northwest portion of Washington State, is already home to two oil refineries and an aluminum smelting plant. One refinery, owned by BP, is the fourth largest oil refinery on the West Coast. The facility processes over 225,000 barrels of crude oil per day from Alaska’s North Slope and employees 875 people. Phillips 66 operates the second refinery, which can process up to 100,000 barrels of crude oil per day.  The Alcoa Intalco Works is an aluminum smelting facility that has been in operation since 1966 and employees around 640 people.  Because the area is already an industrial hub, proponents of the project are trying to convince the residents of Whatcom County that the Gateway Pacific Terminal will bring 3,500-4,400 new jobs to the area.

Opponents of the project worry about the added pollution and other environmental effects of a massive coal terminal in the Northwest. Environmentalists have expressed concerns about the hypocrisy of calling Washington a climate friendly state while they profit off of exports of coal to Asia. In a town hall style meeting, Democratic Governor Jay Inslee insisted that the state’s Department of Ecology would conduct an extensive review of the Cherry Point project which would take into account “pollution from the facility itself, rail traffic carrying coal to the facility, and the impact on greenhouse gases from coal burning in China, India, and other destinations.” This state review will be in addition to a federal, and less extensive, review by the Army Corps of Engineers. Conducting two separate reviews of this scope for a coal export facility is unprecedented.

With the stakes so high, big money from outside donors has flooded into Whatcom County. According to the Seattle Times, three political groups have pumped over $1 million into the races for these four council seats, much of which has been funneled through Political Action Committees. California billionaire Tom Steyer donated $400,000 through the PAC Washington Conservation Voters to oppose the project, while Cloud Peak Energy and Global Coal Sales have donated at least $50,000 each to the PAC “Save Whatcom”. These PACs in turn donated money to other PACs like “Whatcom First” and “Whatcom Wins” or directly into the individual candidates’ campaign funds. This multi-layering of PACs to launder money has not gone unnoticed. Todd Donovan, Professor of Political Science at the Western Washington University in Bellingham, has filed a formal complaint with the state Public Disclosure Commission. However, it is unlikely that any action will take place before the November 5 election.

So who are the candidates and where do they stand on the issue? One quirk of the Whatcom County Council is that the candidates have to run without an affiliation to a political party, though they do unofficially alight with certain parties. On November 5, four candidates of the seven member panel will be up for re-election. The Anti-coal groups, Washington Conservation voters and Whatcom Democrats (via the PAC “Whatcom Wins”), have raised almost $400,000 for incumbents Kenn Mann and Carl Weimer as well as challengers Barry Buchanan and Rud Browne. The Pro-coal group, Save Whatcom, has raised $150,000 for council chair Kathy Kirshner, incumbent Bill Knutzen, and challengers Ben Elenbaas and Michelle Luke.

[I have included screenshots of each PAC’s donations and expenditures at the end for clarity.]

The politics of each candidate get complicated, but the important thing to remember is that the candidates are not allowed to talk about their stance on the Pacific Gateway Terminal. The reason for this is because council members also possess, along with legislative power, quasi-judicial duties and therefore, must remain impartial on future issues which they may have to decide upon.

There are currently 126,888 registered voters in Whatcom County. While turnout will most likely be historically high this year, in the past it has been about average with the rest of the US. When the incumbents ran before in 2009, “anti-coal” candidate Ken Mann received 28,751 votes, defeating his opponent by 2,200 votes. The other “anti-coal” candidate, Carl Weimer, received 27,747 votes, defeating his opponent by 835 votes. Weimer’s opponent in that race, Michelle Luke, is “pro-coal” and will be challenging Weimer for his seat again.  The “pro-coal” incumbent Bill Knutzen received 29,925 votes and beat his opponent by a sound 4,203 votes. The other “pro-coal” incumbent, Kathy Kershner, is the acting Council Chair. Kershner received 27,605 votes in 2009, narrowly edging out her opponent by only 307 votes! Each side only needs 4 votes to win and the vote-counters believe that each side already has 2 each. Therefore, the results of this election absolutely matter.

So far, the candidates have remained tight lipped about the whole issue. According to an interview from the Seattle Times, “Council Chair Kathy Kershner emphasized her work on Lake Whatcom property rights. Her opponent, Barry Buchanan, backed a smaller version of the new county jail. These are the real issues of the election, Ferndale Mayor Gary Jensen said. ‘If (the coal proposal) even comes before the council, it’ll be two or three years,’ he said. ‘There are a lot of issues that will be considered before that.’” Though, with the money already involved, it is doubtful that these candidates will sit on the issue for that long.

No matter what the outcome, November 5 will certainly be an exciting evening for the residents of Whatcom County. However, even if the If the coal terminal project is rejected by the County Council, then another fight awaits in Longview, Washington, where another coal terminal is under consideration. 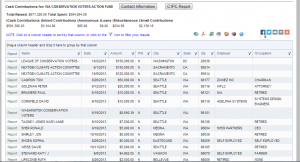 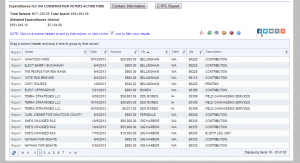 Contributions to Save Whatcom (pro-coal)

Expenditures for Save Whatcom (pro-coal) 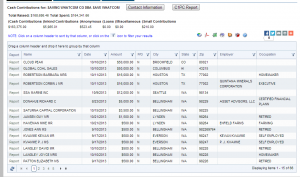