Introduction to the Smart Grid, Pt. 1

Here at the University of Texas, we are hosting one of our nation’s smart grid research groups, The Pecan Street Project.  I had the chance to hear members of the team present a couple of times recently, and the work they are doing is quite fascinating and, moreover, revolutionary.  Smart grids—more than just being a “cool idea” that would give our nation that Tony Stark edge of the future—have the potential to significantly reduce the amount of carbon emissions we as a nation emit every year.  The widespread rollout of a smart grid throughout the United States poses the opportunity for reducing utility sector carbon output by more than 12% by the year 2030.   That’s the equivalent of pulling 66 traditional coal plants off the market, or emitting 442 million metric tons of carbon less each year.  This post will provide an introduction to smart grid technology and its role in greenhouse gas emissions reduction.

General Overview (What is a smart grid?)

On its most basic level, a smart grid changes electricity delivery from a one-way street (moving energy from the point of generation to customers) into a two-way communication and transmission path.  Both users and distributors receive real-time consumption data, which has big implications for increasing overall efficiency.  Not only that, but sensors placed throughout the power grid transmit data back to the utilities, enabling electricity providers to rapidly locate and isolate the sources of power outages.  This significantly reduces the risk of prolonged downtime. 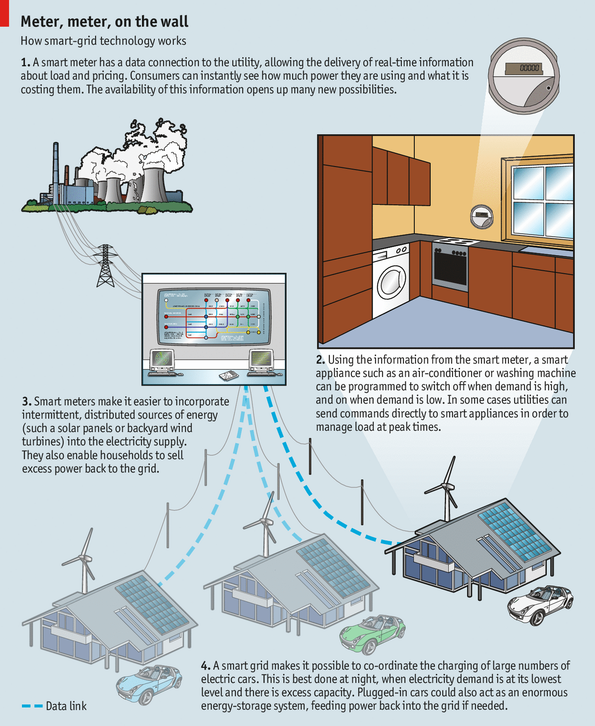 Smart grids are also set up to allow easier integration of multiple power sources into the energy mix, from both the utility and the customer side.  That means that pulling new wind farms online and hooking personal PV arrays into the system should be relatively straightforward.   Because of this, the notion of “smart grid” often conjures images in one’s mind of infrastructure and home layouts like that found above.

If this sounds like an expensive arrangement, that’s because it is.  Costs of a nation-wide grid upgrade could be upwards toward $500 billion, nominally, based on a report conducted by the Electric Research Power Institute in 2011.  And the benefits?  We could see a return on investment that ranges anywhere from $1.2 trillion to $2 trillion, when carbon emission mitigation, blackout prevention, and consumer savings are all considered.

The smart grid setup allows us to tailor both how we produce and how we use energy.   With the potential for efficiency gains on either end of the system, therefore, a smart grid gives us the opportunity to greatly reduce the amount of energy we consume.  For example, power plant production and source-switching can be delegated according to real-time supply and demand, which would give us a much more effective edge in managing peak load and containing outages. 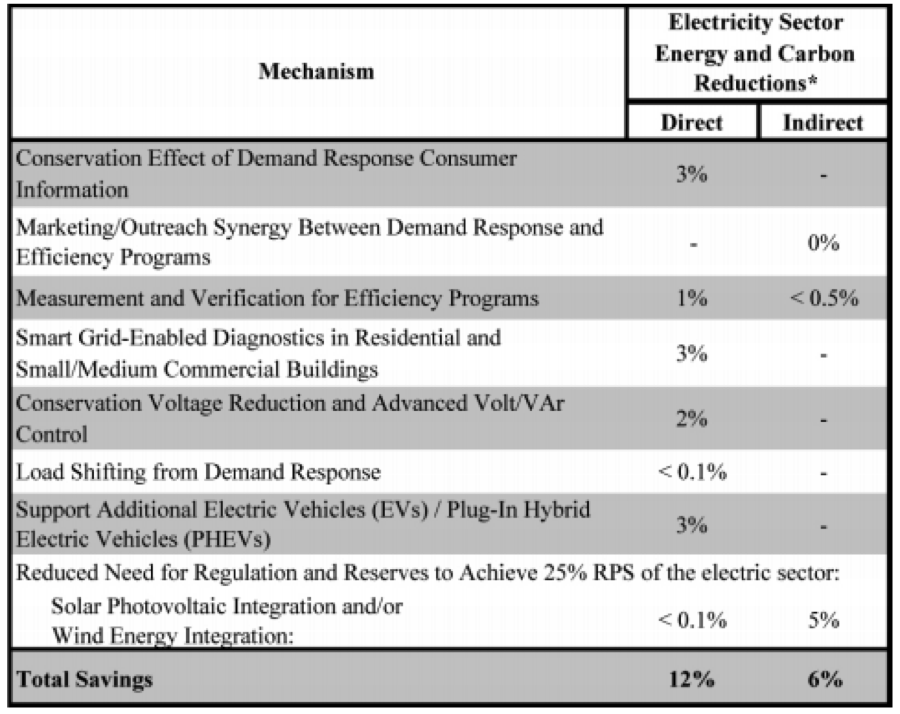 Customers can also tweak their usage accordingly, based on their smart meters’ data reports and recommendations.  In fact, a quarter of the 12% projected savings is based on customer adaptation following their exposure to consumption and pricing data.  With the power of modern information technology, users can turn to their computers and smart phones to check and adjust their residential HVAC systems (see: Nest).  This allows them to consume only the energy they need, regardless of whether or not they near their thermostat.

In line with that, by analyzing consumer load throughout the day, power plants can adjust their rates according to demand.   When demand is high, the utilities can raise prices, which would incentivize customers to be more efficient about their consumption practices.  Many may not consider the cost of running their washing machines during peak hours, but with the introduction of variable energy rates, they might start to think twice about doing that extra load of laundry early in the evening.

Finally, when smart grids are coupled with appropriate appliances, the process of evolving one’s energy consumption to highly efficient levels is made easy.   Moreover, when these grids are complimented by a fleet of electric vehicles (EVs), the carbon emissions benefits we see are greater than meets the blind eye.  First, we are pulling a percentage of petroleum-fed automobiles off the road and replacing them with EVs, which are cleaner in economies that have a higher percentage of renewables in their electricity generation mix.  Additionally, these vehicles typically charge at night, using off-peak power (with a larger portion generated through wind, in areas where it is available).  During the day, when people are at work and not driving as much, they can reconnect their cars to the grid and provide peaking power during high-demand periods.

Part one of the smart grid introduction touched upon the basics of its functionality and its effect on greenhouse gas reduction.   Part two will cover the barriers to widespread smart grid adoption and the risks assumed through investing in such a high-impact project—two very important areas that must be thoroughly evaluated before any big decisions are made.