↓ Skip to Main Content
Home › Agriculture › The Green Wall of China: Enough to keep the Yellow Dragon at Bay?

The Green Wall of China: Enough to keep the Yellow Dragon at Bay?

Every year, Beijing and other major cities in East Asia are tormented by the infamous Yellow Dragon. Not to be confused with Hoàng Long, the mythical hornless dragon which bestowed Emperor Fu Xi  with the fundamentals of written script, this yellow dragon constitutes China’s 5th season ; dust storms. These dust storms turn the sky yellow-orange and cause level five air pollution warnings across region. To control the spread of desertification, a prime cause of these dust storms, the government embarked on the largest reforestation program in the world – The Green Wall of China. Formally known as the Three Norths Shelterbelt Development Program, this initiative was designed back in 1978 to plant nearly 90 million acres of new forest in a band stretching 2,800 miles across northern China is planned to continue till 2050.  Between 2000 and 2010 alone China increase its annual forest cover by 11,500 square miles.

However, despite these numbers, scientists and environmental groups are critical of the Great Green Wall program and have called it counterproductive and even dangerous to long term sustainability. And the Chinese authorities are listening to them.

The idea behind the Norths Shelterbelt Development Program is as simple as its scale is large. The economic boom initiated an environmental decline in China with large forest lands that acted as carbon sinks, disappearing quickly. Intensive agricultural practices, deforestation and land degradation have all led to rapid desertification with the Gobi expanding 950 square miles every year. This affects around 400 milllion people and costs around $6.5bn to the economy every year. 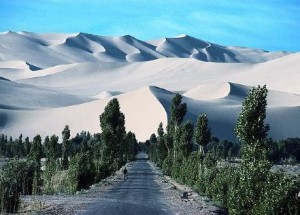 To combat this desertification, Chinese authorities launched a multi decade reforestation program that uses fast growing , carbon capturing trees to stop land erosion and increase forest cover. This would not only provide ecological benefits  but also provide economic benefits such as raw material and reduce the massive economic costs associated with the Yellow Dragon.  Lastly, it would act as an   effective propaganda tool in Chinese efforts to project a positive image of  it  how    it is dealing with climate change

In terms of reforestation alone, the project has been successful.  By 2009, the Chinese State Forestry Administration had managed to successfully increase forest cover from 12% to 18%, with the goal of reaching a national forest cover of 42% by 2050.  However the Green Wall of China  has been fraught with ecological, sustainability, credibility problems, many of which demand a restructuring of the current approach. 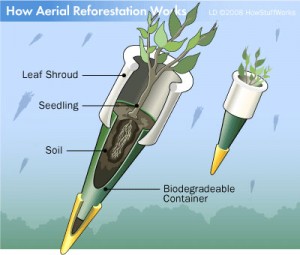 Scientists and conservation groups are concerned about the long term viability of the program, which they argue is not sustainable , bio diverse and may even result in further desertification. The trees are planted manually as well as by air dropping millions of seeds in capsules. However, up to 85% of these plantlings fail. More importantly, researchers say that most of the these trees are non-native , require a lot of water and perish easily. They also deplete the soil moisture, and block sunlight from reaching smaller native plants. This process leaves the top soil vulnerable, dryer and exposed to wind erosion – further contributing to dust storms. Additionally, the use of one or two species on vast regions of land is a threat to biodiversity and significantly impacts land health. It appears that certain varieties of trees such as timber, rubber and pulpwood have been given preference due to commercial incentives, and in some cases replaced 60% of natural forests in some areas.

On the governance side the progress on transparency and reporting has been blighted by bureaucratic infighting amongst competing agencies. While Chinese statistics are studied with suspicion in the West, this lack of transparency reduces the Green Wall of China’s credibility. The German Technical Cooperation (GTZ) reported back in 2005 that “ bureaucratic infighting between the [State Forestry Administration] and the Three-North Shelterbelt Office, and difficulties in controlling operational factors affecting the baseline data recording by relevant local parties have made progress very slow.”

While the main challenges afflicting the Norths Shelterbelt Development Program still persist, the Chinese government has become much more active in addressing them. The Tengchong restoration project can serve as a good model for preventing desertification and has been picked up by China’s State Forestry Administration. Developed through a partnership between China’s Center for Nature and Society and Conservation International , the model aims at restoring native plant species as well  paying local communities to preserve existing forests. Currently, through this model, 1 million yuan ($160,000) is being distributed between 277 Tengchong households each year. Perhaps this model needs to be integrated with the Norths Shelterbelt Development Program to remedy some of its ill effects.

This year’s dust storm demonstrated the effects deforestation has on the Chinese economy. This issue is not just limited to China. It is central to the problem of equating natural forests with plantations.

For now, the Green Wall of China has a long way to go before it can be  called great.

Bilal Bawany is a second year Master of Global Policy Studies student at the LBJ School specializing in International Development and Governance. His experience in the public health, agribusiness and education sectors has fuelled his interest in how public private enterprise, aid and development policies affect the political economy of service delivery in developing countries.