After Fukushima: Japan’s Climate and Energy Policy Under Review 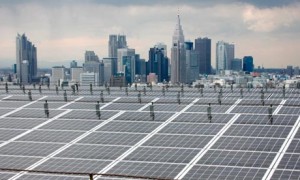 The 2011 nuclear accident that occurred at Japan’s Fukushima Daiichi reactor sent shockwaves through the nuclear power industry. The resulting lack of trust in the safety of nuclear power is causing countries around the world to reconsider their use of nuclear reactors to generate energy. Nowhere is the debate about the future of nuclear power as contentious as in Japan.

While public opinion may not be supportive of Japan’s continued use of nuclear energy, many Japanese experts continue to assert that nuclear power is an important part of the Japanese energy mix, especially if Japan plans to continue making greenhouse gas (GHG) emissions reductions. As the Japan Times recently reported, Zengo Aizawa, vice president of Tokyo Electric Power Co. (TEPCO), said, “The Japanese government still considers nuclear as an option for the energy mix…[t]he government has rethought the idea of abandoning nuclear energy.”

All 50 of Japan’s nuclear reactors were shut down after the Fukushima nuclear accident. Only two reactors were restarted in July 2012, but were shut down again for inspections in September 2013. As the political struggle over whether or not to entirely abandon nuclear energy continues, Japan must find temporary solutions to fill the nuclear void. Japan produced approximately 30 percent of its power in nuclear reactors before the Fukushima disaster. Quickly ramping up new generation capacity on this scale is no easy task.

From Clean to Coal?

To accomplish this Herculean feat, Japan is planning to build 14 new power plants by the end of 2014. 12 gas-fired plants are slated to be built next year, while 2 new coal-burning power plants are due to be completed by the end of 2013. A recent Reuters article pegs the cost of constructing these new power plants at an estimated $7 billion. While this cost is enormous, the move is intended to cut Japan’s cost of energy. Japan currently uses relatively expensive (and dirty) crude and fuel oil to temporarily generate the power needed to fill the nuclear gap.

This move to build fossil fuel burning power plants to replace clean nuclear power will only make it more difficult and costly for Japan to cut GHG emissions. Japan will also be importing more liquefied natural gas (LNG) and coal to keep the new plants running. Importing these fuels will costs billions of additional dollars, and fuel imports already constitute a substantial portion of Japan’s trade deficit. Unfortunately, this seems to signal a retreat from the ambitious GHG emissions reduction goals that Japan had been on track to achieve.

A recent World Nuclear News article reported that the Japan Federation of Economic Organizations recommended avoiding setting new GHG reduction targets until “well into next year.” The reassessment of Japan’s future energy production mix makes GHG emission reduction targets difficult to make. According to the same article, Japan’s Ministry of Economy Trade and Industry (METI) prefers putting off making GHG emission reduction targets until the “…future of nuclear is more clear.” The Ministry of Environment is, however, considering setting targets that are achievable assuming Japan will produce no nuclear power. Whatever view prevails in Japan’s climate policy debate, any targets that Japan does agree to will mark a sharp reversal from its aggressive stance on GHG mitigation. The 19th Conference of Parties (COP19), beginning this month in Warsaw, may be disappointing for those that wish to see ambitious mitigation pledges.

Fortunately, the outlook for GHG mitigation in Japan’s energy production is not all bad. Restart applications have already been filed for 14 nuclear reactors in Japan. The new safety inspection and certification process will surely be slow, but at least one third of Japan’s nuclear power plants are beginning the process. METI data also show that 3.7 GW of renewable energy generation capacity has been approved since the Fukushima accident. Although, this mostly solar renewable capacity is less than 10% of the 44.4 GW nuclear power base that is offline. Japan’s renewable energy policies give solar higher feed-in tariffs do not subject it to the stringent environmental assessments that impede wind power adoption.

However, Japan’s policy-makers’ attitudes toward wind energy may be shifting. An article in Wind Power Monthly outlined METI’s recent decision to include wind power in its calculations of electricity delivery capacity. Wind had previously been excluded due to its intermittent nature, but the move to include wind in electricity demand calculations shows Japanese policymakers are giving greater attention to renewables in the wake of the Fukushima nuclear accident. Still, the diffusion of renewables in Japan has been slow, so other avenues are being explored for GHG mitigation.

Japan decided to no longer participate in the Kyoto protocol because of frustrations that built over some time. One of Japan’s central concerns was the difficulty and complexity of the Clean Development Mechanism (CDM) process. Japan aggressively seeks out developing countries to partner with on GHG mitigation projects, but the CDM process often was an impediment. Japan has decided to pursue an alternative, which it is calling the Joint Crediting Mechanism (JCM).

A joint committee made up of government officials from both bilateral partners will oversee the process instead of a centralized authority and the process should be more streamlined. As a recent Guardian article stated, “The JCM aims to facilitate diffusion of leading low-carbon technologies, products, systems, services, and infrastructure as well as implementation of mitigation actions, and contribute to sustainable development of developing countries. It also aims to evaluate reduction in greenhouse gas emission levels in a quantitative manner, by applying measurement, reporting and verification methodologies, and using them to achieve Japan’s emissions reduction target.” The JCM also addresses a criticism that Australia has made of the CDM, by incorporating projects focused on reducing emissions from deforestation and forest degradation (REDD+).

While the JCM is designed to reduce transaction costs of bilateral GHG mitigation projects, this move to develop more bilateral mechanisms for generating carbon offsets could end up increasing transaction costs on a global scale. Overall, the future of Japan’s energy mix and climate change policies remain unclear. The COP19 will certainly give Japan the opportunity to show how committed it remains to GHG mitigation. While Japan faces great difficulty adjusting to new realities, Japanese policymakers continue to seek out creative solutions to ensure that Japan can continue to mitigate GHG emissions, with or without nuclear power.