↓ Skip to Main Content
Home › Canada › Mired in the Oil Sands, An Opportunity

Mired in the Oil Sands, An Opportunity 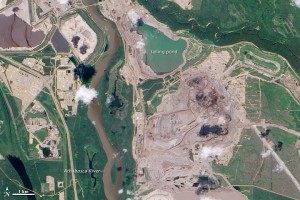 The Canadian government’s most recent report on the country’s greenhouse gas emissions undermines its push for U.S. approval of the Keystone XL pipeline. Specifically, the report states that Canada will fail to meet its goal of reducing carbon emissions to 17 percent below its 2005 levels by 2020 under the Copenhagen Accord. It estimates that Canada’s emissions will reach 734 megatons in 2020, significantly higher than its goal of 612 megatons under the 2009 treaty.

While the environmental impact of oil sands production has been under scrutiny for years, it is clear that the industry is an important part of the Canadian economy. Global energy demand has led to a reliance on unconventional oil, and Canada is in a unique position to meet this need through the mining of its oil sands. The Canadian government is therefore faced with the challenge of sufficiently reducing the country’s emissions levels while effectively leveraging this valuable commodity.

Alberta’s rich deposits of oil sands, also referred to as tar sands, have made it Canada’s central point of production. Venezuela and Saudi Arabia rank first and second (respectively) for their amount of proven crude oil reserves. Canada, specifically Alberta, follows closely behind. According to Alberta’s government, the province contains 170.8 billion barrels in oil reserves, 169.3 billion of which are derived from its oil sands. Its total reserves constitute 13 percent of total oil reserves worldwide.

A recent report released by the Canadian Association of Petroleum Producers states that Canada’s growing dependence on oil sands and other non-conventional sources of oil has led to a 21 percent increase in industry per-barrel greenhouse gas emissions since 2008. Significant investments in cleaner technology have resulted in lower emissions from oil sands production, but any progress has been offset by the increased production of bitumen.

Oil sands are comprised of sand, water, clay, and bitumen (a heavy, viscous form of crude oil), and can be recovered in one of two ways. If the deposits are located close to the surface, open pit mining techniques are employed. The oil sands are then sent to an extraction plant where hot water is used to separate the bitumen from the other components. If the deposits are located deep beneath the surface, in situ drilling techniques are required which often involve the use of steam-assisted gravity drainage (SAGD). Approximately 80 percent of the reserves are assumed to be recoverable only by this technique.

The increase in per barrel greenhouse gas emissions from Canada’s oil sands could affect the U.S government’s decision to approve the Keystone XL pipeline. The pipeline is slated to run from Hardisty, Alberta to Steele City, Nebraska. From Nebraska, it would join another pipeline that would connect Canada’s oil sands deposits with American refineries in Texas. The Keystone XL pipeline would transport 830,000 barrels of oil per day (at maximum volume) to Gulf Coast and Midwest refineries.

President Obama said that he would approve construction of the pipeline only if it does not “significantly exacerbate” carbon pollution. However, it is unlikely that Canada’s increase in emissions will impact the U.S. State Department’s final environmental assessment of the pipeline. Its draft assessment, released last March, stated that since the pipeline wouldn’t significantly impact production, it would have little impact on global carbon dioxide emissions. Those in favor of the pipeline argue that its construction will result in the creation of thousands of new jobs and improve U.S. and North American energy security.

Opponents of this argument claim that the construction of the pipeline and expansion of Canada’s oil sands production run counter to the country’s goal of reducing its overall emissions. In a report released by 350.org, a representative of the U.S. EPA estimates that emissions from the Keystone XL pipeline would amount to the equivalent of annual emissions from over 6 million new cars on the road. Environmentalists have also expressed concern regarding the pipeline’s impact on threatened and endangered species that habitat affected areas.

With President Obama planning to make his decision by early 2014, intense debate surrounding the Keystone XL pipeline is likely to continue. The U.S.’s approval of the pipeline would come with inherent risks but also undeniable benefits to the U.S. and Canada. The potential impacts of the pipeline on each country’s economy and environment must be carefully weighed to ensure adequate measures are in place to protect both. Energy needs are at an all-time high and Canada is aptly positioned to meet this demand on a global scale, but whether or not the Keystone XL pipeline will help the Canadian government meet this demand has yet to be seen.