As Thanksgiving approaches, we are all reminded to be thankful for what we have.  Supermarkets should use this time to take a look at their commitments and take steps to improve their past (in)actions.  Nearly three years ago on Thanksgiving day 2010, it is rumored that Muhtar Kent, the CEO of Coca-Cola, called Mike Duke, the CEO of Walmart, to ask him to sign the Consumer Goods Forum’s (CGF) resolution asking companies to begin phasing down hydrofluorocarbons (HFCs) by 2015.  Walmart, and more than 400 members of the CGF agreed and the CGF released its HFC resolution on the first day of the Cancun Climate Summit in 2010; however, fast-forward to present day and those same supermarkets and retailers are failing to take the necessary steps to replace HFCs. 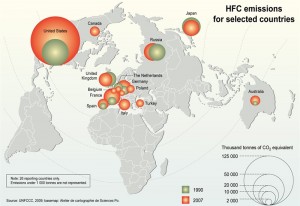 The Environmental Investigation Agency (EIA) released a report on October 17, 2013 entitled: The Dirty Dozen: How your local supermarket is killing the climate.  It finds that the 12 supermarkets: Ahold USA, Costco, Delhaize, HEB, Kroger, Meijer, Publix, Safeway, Supervalu, Target, Walmart, and Whole Foods have not taken sufficient if any action to reduce the amount of HFC emissions leaking from refrigeration systems.

In the US, HFCs are the most common refrigerant used in supermarkets.  The report finds that commercial refrigeration systems make up 32% of global HFC consumption and that HFC emissions from supermarket refrigeration equipment and associated loss of energy efficiency can account for almost 50% of a supermarket’s total greenhouse gas emissions.  Furthermore, the EIA quotes that each US supermarket emits on average 1,556 metric tons of HFCs annually from leaks in their systems.  This is the equivalent of more than 300 passenger cars from leaks alone.  Another statistic cites that the leakage from all US supermarket refrigeration is more than the emissions from the annual electricity of nearly 8 million households.

While the current track record is less than stellar, there are benefits to be had.  Switching out HFCs for natural refrigerants (hydrocarbons, carbon dioxide, and ammonia) has the potential to reduce a supermarket’s carbon footprint by 25%.  And if all supermarkets in the US did this, HFC emissions in the US could be cut by more than 40%.

The EIA report graded the 12 stores based on nine categories under four main themes: HFC use and policy, partnerships and pledges, maintenance, and energy efficiency.  Every single one failed.  Only Delhaize, which owns Food Lion among other brands, received a score higher than 50% with Whole Foods coming in 2nd place with 38% of total available points.

The conclusion of the report is that voluntary measures have failed in persuading US supermarket chains to phase out HFC refrigeration technologies.  Some of EIA’s recommendations are:

HFCs have been seen as low-hanging fruit and a quick win in the US, but has faced pushback in the international arena.  The EIA recommended in their report that an amendment be made to Montreal to phase out HFCs and in June, President Obama and Chinese President Xi Jinping agreed that the two countries would work together to do just that. However, victory has been short-lived and India has ensured that the EU and US backed proposal to phase out HFCs under the Montreal Protocol was not in the final decision.