Introduction to Power Production and Renewables

In 2010, electricity and heat production accounted for 41% of global CO2 emissions, representing the single largest contribution to greenhouse gas emissions on the sectoral level. Moreover, the sector’s emissions will likely continue to increase as developing countries strive to meet the growing energy demands of their populations and stimulate economic growth. [1]  It is within the power production space that renewables present a great potential for emissions reductions. Future posts will examine the role that renewable technologies can, and do play in developing countries; this post will give a broad overview of power generation and reductions potentials, and then hone in on the growth, potentials, and challenges of renewable technologies.

Coal and natural gas are the protagonists in the global power production story; oil and nuclear play subsidiary roles. Coal, cheap relative to natural gas, is the preferred source of power for most of the world. The following graph, from IEA’ s Energy Technology perspectives 2012 illustrates this point: it shows each primary fuel source’s contribution to power and co-generation (the middle column); the width of the line represents the relative contribution of each fuel source. [Note: Numbers do not match up because for each supply product, it may contribute to another area within transformation.  For example, a certain amount of coal goes to direct consumption of industry (the end use side), and a certain amount to power and co-generation. This photo shows the flows specific to power generation and co-generation plants.] 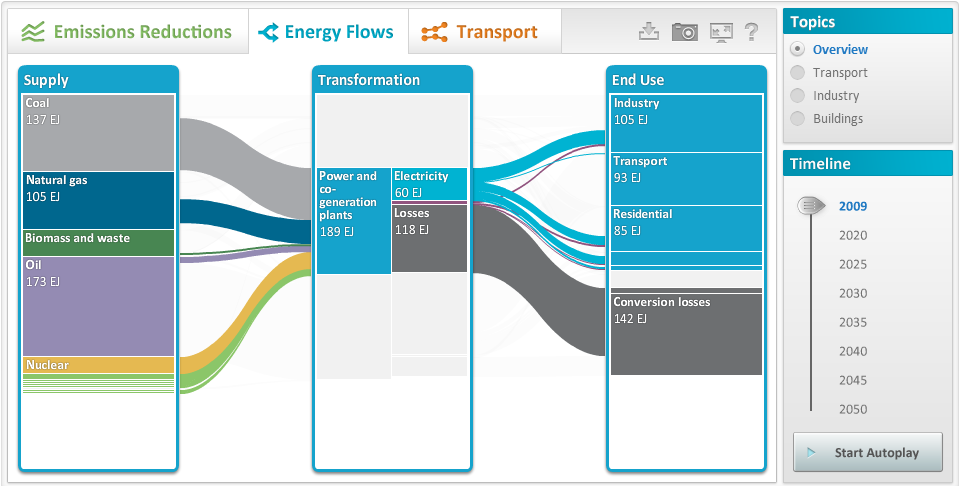 Reductions potential in the power sector:

According to the IEA’s ETP model, the emissions reductions potential in the power sector is enormous. Specifically, it has the potential to contribute a 53% reduction toward the 2 degree Celsius target going out to 2050, a target built upon the assumption that on the global level, countries must reduce their emissions by half their 2009 level in order to limit global warming to two degrees Celsius. The basic intuition for mitigating CO2 emissions is to either reduce the amount of coal in the power production process by fuel switching and co-firing, or by substituting coal’s use with renewable technologies.  The following model includes all of these strategies. 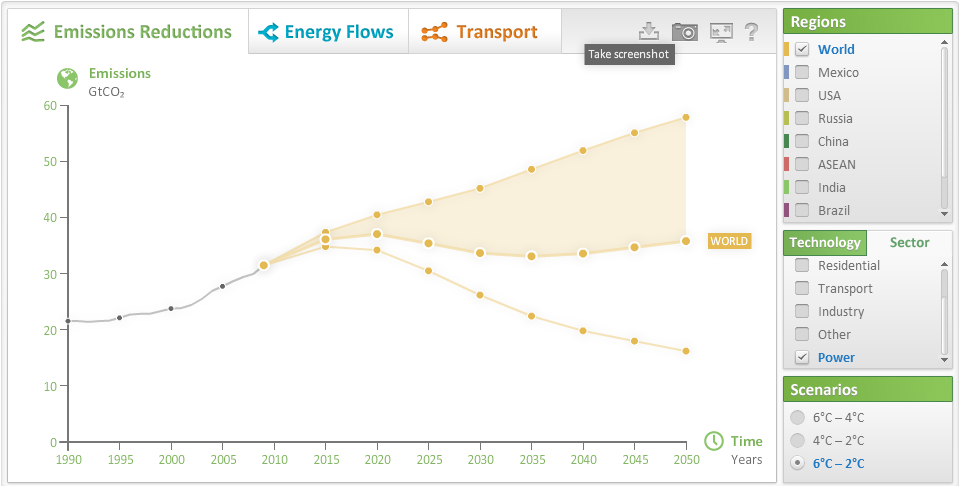 However, when isolating for renewable technologies, it becomes clear that renewables, although constituting a small contribution to power generation now, could substitute or complement existing technologies and create a large (24%) reduction within the power sector. 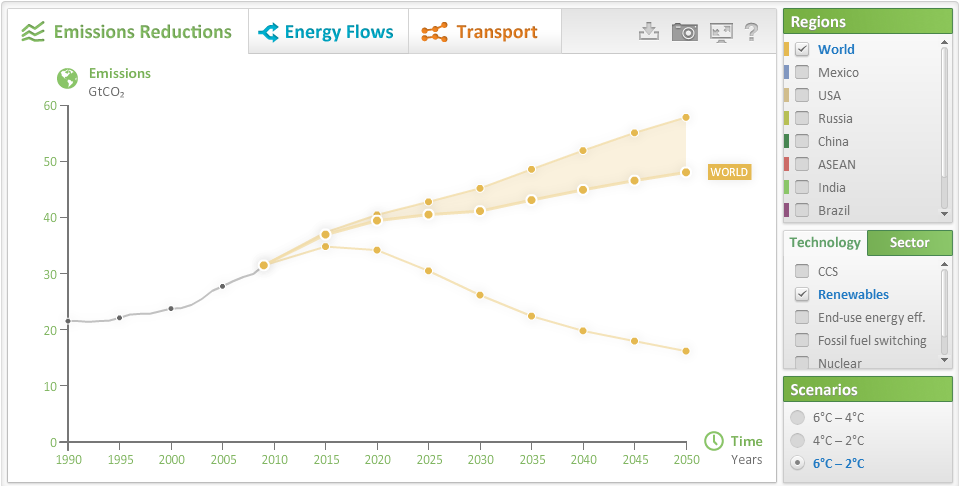 Renewables have the potential to scale up or down and are applicable to central (urban) and decentralized (rural) power networks. [2] They can function as complements to each other;  so, for example, fixed power sources, such as from bioenergy, may make up for the intermittent input of variable power technologies, such as solar and wind. Furthermore, pumped storage technologies may also mitigate some of the problems associated with shifting energy demands.

While renewables may have many benefits, they also suffer from serious limitations and face many challenges. Renewable technology may present a great opportunity to substitute, or complement traditional fuel sources for power, but the problem of variable contributions to the grid may be difficult to overcome in the absence of  either cheaper energy storage technologies or complementary renewable fuel sources. Moreover, renewables may simply be too expensive for some countries to incorporate into their existing power production structure, because they have high up front costs and may require large amounts of investment to cover maintenance and upkeep costs. While the levelized cost of electricity, the average cost of electricity over the lifetime of the renewable technology, is declining [3], coal still remains a cheaper fuel source and will remain to be so in the near term. Governments that have adopted renewable policies have focused on supply side interventions to promote the use of renewable technologies; moving forward, the question becomes one not just of increasing supply, but how to integrate them into the existing power grid infrastructure.