The issue of hydraulic fracturing is revealing deep divisions in the European Union. While many of the rich nations of Western Europe have all shunned the practice, the poorer countries of Eastern Europe are in favor of it. The debate is revealing deep rifts in the power structure of the EU, as well as how it relates to Russia, its energy-exporting rival to the east. The technology of hydraulic fracturing will pose a significant challenge to the speedy implementation of non-hydrocarbon alternatives. The energy debate of the next twenty years in Europe may very well switch from whether or not oil and natural gas will be part of the energy strategy, to how much of a part will it continue to play.

France became the most recent country in Western Europe to uphold a ban on hydraulic fracturing in late October of 2013. With this decision, they remain in the anti-fracking ranks of Europe, alongside Belgium, Luxembourg, and Bulgaria. This was of no surprise to most, as 39% of France’s energy production is from nuclear power, giving France significantly more energy independence than most nations of the EU. [1] France is also one of the richest countries in Europe, which is the greatest predictor of support of emissions reduction regulations. Additionally, France is less dependent on Russia for its energy than the nations of Eastern Europe. 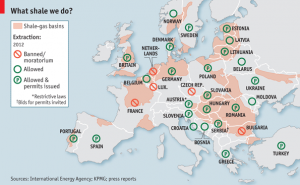 While some have argued that hydraulic fracturing would not be commercially viable in France, this argument does not hold up when its potential reserves are taken into account. The United States Energy Information Agency estimates that there are 137 trillion cubic feet of “technically recoverable” gas in France, equivalent to decades worth of national consumption. [1] This issue spans beyond which nations have the greatest recoverable reserves, to which nations feel that the technology is important enough to their energy security to sacrifice some of their environmental values. Countries like Britain and Germany, who have similar income levels and less estimated hydrocarbon reserves than France, have gone ahead with allowing fracking and issuing permits.

Hydraulic fracturing is especially appealing to the nations of Eastern Europe because this is where aversion to fossil fuels is the least and the dependence on Russian hydrocarbons is the greatest. Russia currently supplies the majority of natural gas to the nations of Eastern Europe. Bulgaria is the only Eastern European country that has banned hydraulic fracturing. For these reasons, it is no surprise that Poland and Ukraine have been some of the quickest in Europe to sign fracking contracts. Poland has consistently vetoed and delayed EU attempts to tighten fossil fuel emissions due to its extensive coal reserves, so adding oil and natural gas (which burn cleaner than coal) would not be against its national preferences.

Additionally, eastern EU nations are the most desperate for foreign direct investment of any kind, which has created a lightly regulated business environment. This has led to what many have dubbed a “race to the bottom” in the regulating environment of countries like Poland, Hungary, and Romania. They are unlikely to pass any environmental regulations that could cost them a share of foreign direct investment. In fact, this has been a topic of controversy, as the United States and Western Europe have systematically outsourced many of their most polluting industries to less-developed nations such as China, Poland, and Turkey. This calls into question the commitment of many advanced nations on emissions reduction, as they tighten regulations at home but simultaneously invest more heavily in lightly regulated economies abroad.

Overall, the prevalence of fracking in Europe will certainly delay the implementation and expansion of alternative fuels and renewable resources in Europe. It has given fossil fuels a second life that few foresaw a decade ago. Most emissions reduction scenarios for Europe still need to be revised in order to factor in losses from fracking. Additionally, increased domestic energy security may make EU emissions regulations less popular, as energy efficiency will shift from a matter of national security to a matter of national preference. The hydraulic fracturing debate in Europe will contribute greatly to the development of the technology, as most of the European Union permits fracking despite having the strictest environmental regulations in the world.