Following economic liberalization reforms that began to take effect in 1991, passenger and freight traffic increased in step with a nearly 63.69% increase in GDP per capita between 1991 and 2013 (Ramachandra, & Schwetmala, 2009). From 1995-2005, gross domestic product nearly doubled, and the number of registered motor vehicles increased from 5.4 million in 1980 to 72.7 million in 2003. During this period, foreign and domestic investment in road infrastructure projects increased in an effort to promote access to markets and encourage economic development. Where essentially no new major transport infrastructure projects were constructed from 1947 to 1988, nearly 700,000 km of highways have been constructed since 1995, and demand for vehicle km traveled is projected to increase, as the following figure suggests. 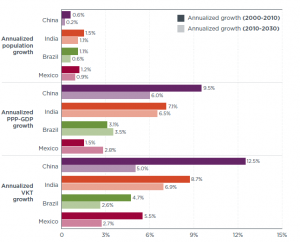 The transport sector is also one of the fastest growing sources for greenhouse gas emissions in India, and an important factor in India’s economic success over the past two decades. In fact, transportation accounts for a 6.4% share of India’s GDP, with road transportation contributing 4.5%. From 2007-2010, the transport sector’s share of net emissions increased from 7.5% to 9%, and this share is projected to increase from 203 MtC02e in 2005 to 905 MtC02e in 2025 if policies to reduce the carbon intensity of India’s transportation are not implemented. Transport comprises a part (14%) of the energy sector’s 66% share of total emissions in India as of 2010. It is also the largest end-user of oil in India, consuming nearly 50% of total demand, of which 44% was for diesel products, which is problematic given that India is a net oil importer as of 2012. Demand for passenger and freight mobility is primarily located in densely populated urban areas. Within urban transport, freight contributes nearly 55% of total road emissions due to lorry reliance on diesel for fuel, which contributes to PM emissions and black carbon or soot.

This post will discuss the legal and economic structure of the transport sector in India, potential strategies for reducing India’s GHG emissions from transport, barriers to implementing these strategies, and recommendations for overcoming these barriers.

The legal mechanism enabling the Indian government to set vehicular emissions standards originates from the Air (Prevention and Control of Pollution) Act (APCPA) of 1981, which mirrors the Clean Air Act of the United States. Through the APCPA, state governments in India are given the ability to create standards of air emission output for industrial plants, automobiles, and any other point source that is not a ship or aircraft in cooperation with the Central Pollution Control Board (CPCB). The Environmental Protection Act of 1986 extended this regulatory scope to the central government, and the Motor Vehicle Act of 1988 added to the abilities of the central government to regulate motor vehicle emissions.

Urban air quality is generally poor in India due to the heavy concentration of particulate matter in urban areas due to the congestion of road traffic, which has been elevated in recent years due to the increase of HDV lorries on India’s road and highway system. Concern about the public health impacts from poor air quality thus provided the critical mass to push the APCPA through, which led to the implementation of the India-1 vehicular standards for new vehicles, a precursor to the Bharat III standards currently in place. Resembling EU standards, the Bharat delineates a path for lowering permissible levels of pollutants until 2015. As of 2010, 13 major cities have implemented the Bharat IV standards, which parallel the Euro IV standard, with all other cities set to follow the Bharat III standard.  The Bharat standards regulate the allowable amount of particulate matters and emissions from two, three, and four-wheeled light-duty vehicles, medium and heavy-duty vehicles, and diesel-powered non-road vehicles including locomotive technology, agricultural tractors and electricity generation. Particles that are addressed by the Bharat standards include carbon monoxide (CO), particulate matter (PM), nitrogen oxides produced during combustion (NOx), and non-methane hydrocarbons (NMHC),though CO2 does not fall under the regulatory scope of the Bharat standards. As discussed previously, policy making in India is complicated by an extensive bureaucracy, and so implementation of the Bharat III and IV standards is variable. The following figure illustrates the relationship between the implementation of the Bharat III and IV standards and oil refineries in India. 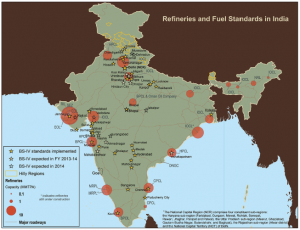 In the next post, I will discuss  political, cultural, and financial barriers to implement long-lasting transportation reforms in India, and some recommendations for overcoming them.