South Korea: A Leader in Asia?

South Korea is the world’s 13th largest economy, the 12th largest global emitter of greenhouse gases, the 11th highest in terms of energy consumption, and the 5th largest oil importer.  According to the World Resources Institute’s Climate Analysis Indicator’s Tool (CAIT), in 2010 South Korea emitted 678.32 millions of tons of CO2eq (MtCO2eq) accounting for 1.52% of total global greenhouse gas emissions. It is projected that it will emit 694 millions of tons of CO2e in 2014, but South Korea has made concrete plans to reduce its emissions.  Originally proposed in 2011 by President Lee Myung-bak, a climate action plan has since been given more detailed reduction policies.  The South Korean government announced in January 2014 that it aims to cut emissions by 30% from projected levels by 2020.  Under a business-as-usual (BAU) scenario, emissions in 2020 are projected to be 776 million tons of CO2e.  The voluntary 30% planned cut will reduce 233 million tons of CO2e by 2020.

The following chart shows which sectors will be hit and how many millions of tons each will have to cut by 2020. 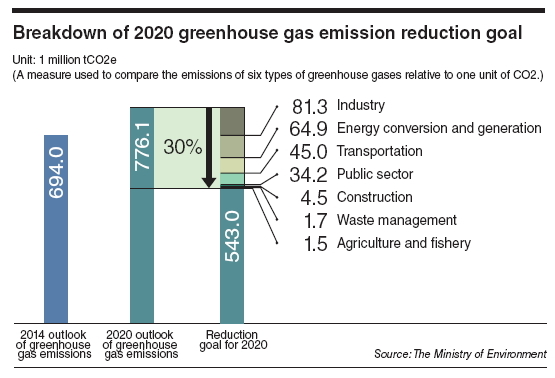 The target reduction cuts are not equally distributed among the sectors.  A cut of 81.3 MtCO2e in the industry sector is a 18.5% cut.  Rates for cuts in energy conversion and generation are 26.7%, for the building sector 26.9%, for transportation 34.3%, for waste management 12.3%, and for agriculture and fishing 5.2%.

South Korea has set a goal for 2014 to cut greenhouse gas emissions by 5.1%.  Current emissions for the year are set at 694 MtCO2e and the cut would reduce this to 659 MtCO2e.

Realizing that to cut emissions by 30% by 2020 is a very optimistic goal, South Korea recently instituted an emissions trading scheme (ETS).  It is the first Asian country to do so.  It will become effective in 2015.  It will cover over 500 companies which emit over 60% of total emissions for the country.  Included in this group of 500+ are companies with emissions averaging 125,000 tons of CO2e per year and factories with emissions averaging 25,000 tons of CO2e per year.  Any business that exceeds the pre-allotted level of emissions will be fined; however, if they are below the target, they have the ability to carry the difference over to the next month.

South Korea is one of the most progressive countries on climate change policies not only in Asia, but in the world.  Its 2020 Plan breaks down the necessary cuts to meet its pledge but only has existing policies in place for six more years.  In order to continue these positive and necessary changes, South Korea must make new plans that extend to 2030 and 2050.  The Smart Grid policy is one that extends until 2030 and if it continues as planned, it should be shared to neighboring countries.