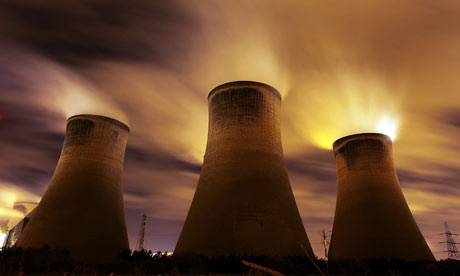 Why is the world’s premiere market-based solution to greenhouse gas emissions not functioning properly? What policy solutions have the EU adopted to mitigate the problem? This blog post provides an introduction to the EU’s ETS. It outlines several basic explanations for the low carbon price on the EU market and introduces the “back loading program”. Keep reading if you want to know why the ETS is in the dumps!

One reason the ETS is not functioning properly is because the EU issued too many allowances upon creation of the market. At the creation of the ETS, domestic lobbying groups successfully convinced EU decision makers to allocate higher levels of permit to soften the initial blow of levying a tax on carbon emissions. Even now, there is a strong constituency of interest groups and politicians who have little interest in making the ETS function as it should — specifically lobbying groups in energy intensive industries and utility companies.  It is unlikely that lobbying groups in energy intensive industries will support their EU representatives in enacting a robust reform to the ETS system (The Economist, 2013).

But this is not the only problem. While the EU has tried to remedy the problem of excess permits by broadly ending the practice of providing free permits to industries directly impacted by the ETS, the EU still grants a significant amount of free allowances to energy intensive industries, particularly in Eastern Europe. From 2013, the EU required power companies to purchase permits, but grants exemptions to countries that have entered the Union in 2004. To illustrate this point, an EU commission paper states :“Eight of the member states which have joined the EU since 2004 – Bulgaria, Cyprus, Czech Republic, Estonia, Hungary, Lithuania, Poland and Romania – have made use of a provision allowing them to continue granting limited numbers of free allowances to existing power plants until 2019. In return they will invest at least as much as the value of the free allowances in modernizing their power sector” (European Commission, 2013)

The consequence of the initial surplus of permits plus the granting of exemptions has been that at the end of 2013, there was a surplus of almost 2 billion allowances — this amounts to the equivalent of one year of emissions. Moreover, there has been a steady decline in the price of permits. From a record high of 32 euro in April 2006, the price fell to a record low of 2.81 Euro in January 2013; recently, prices have stabilized to around 5-6 euro per metric ton of CO2. Many experts suggest that prices need to stabilize at prices over 20 Euros per metric ton in order to create strong incentives for utilities to improve efficiency and reduce dependence on cheap fossil fuel sources — such as coal. The following graphic illustrates the decline in carbon prices from 2008 until mid-2013. 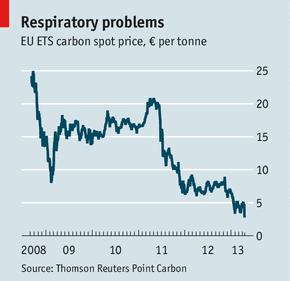 The EU’s current policy to remedy the surplus of permits, a so-called “back loading program”, was enacted as a directive, meaning that it did not require widespread political support from members of the EU parliament. The back loading program, most recently amended in February 2014, will reduce the allowance of permits in a step-wise fashion for the next three years, and then release withheld permits on the market in 2019 and 2020. In aggregate, the program will reduce the market by 900 million permits in the 2014-2016-time period, and then put up 900 million permits for sale in the 2019-2020 time period. Given that there is currently a 2 billion allowance surplus, it remains unclear the impact that the back loading program will have. Annex IV (below) outlines the back loading program, and comes directly from EU Commission Regulation No 176/2014 of 25 February 2014. 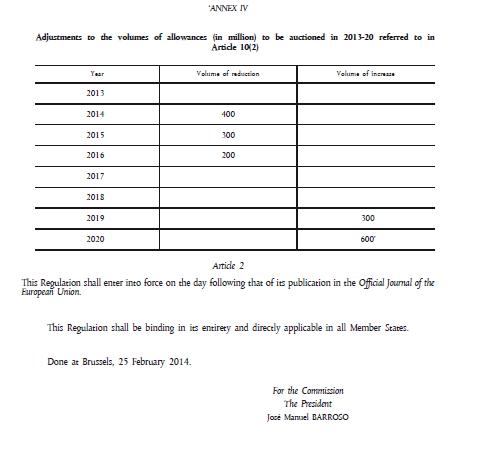 Future posts will discuss the back loading program and politics of the ETS in greater depth. Stay tuned!