Indonesia exported about 18 million metric tons of crude palm oil (CPO) in 2012, making it the world’s largest palm oil exporter. The palm oil industry is a major contributor to Indonesia’s economic development, especially in rural areas, and, as a result, is favored by the Indonesian government as a development strategy; the Indonesian government plans to have over 10 million ha dedicated to the crop by 2015. Unfortunately, expansion of palm oil production is the major cause of peatland degradation in Indonesia, Indonesia’s number one source of greenhouse gas emissions.

Peatlands are swampy areas, which—due to their anaerobic conditions—allow for the building up of organic matter. The accretion of organic matter creates an extremely carbon-rich soil called peat, which essentially serves as a reservoir for terrestrial carbon, preventing the release of CO2 into the atmosphere. When peatlands are drained for agricultural use, the sequestered carbon becomes exposed to oxygen and begins to rapidly decompose. Emissions from degraded peatlands, however, are fundamentally different that those from deforestation because degraded peatlands continue emitting CO2 until the organic matter in them has been completely decomposed, a process that can last for centuries. As a result, while emissions from deforestation decrease with deforestation rates, emissions from peatland degradation increase even as peatland degradation rates go down. The only way reduce emissions from peatland conversion is to halt peatland degradation completely while restoring already-degraded peatlands to their original state. Because of the additive nature of peatland emissions, it is estimated that in 2010, peatland decomposition may have been responsible for up to 60 percent of Indonesia’s greenhouse gas emissions, a number much higher than previously thought. 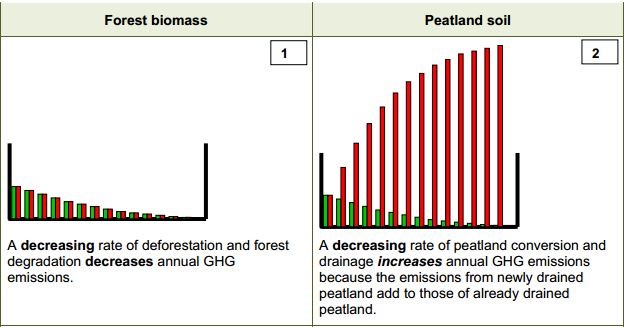 Despite its support for the palm oil industry, the Indonesian government has also made a number of commitments to reducing greenhouse gas emissions and preventing harmful land-use change. In May 2011, Indonesia announced a two-year moratorium on new licenses in 28.4 million ha of primary natural forests and 14.8 million ha of peat lands, a commitment that was extended for an addition 2 years in 2013. The carbon protected under the moratorium is equivalent to 92 Gt CO2e—almost triple annual global greenhouse gas emissions. One of the biggest challenges to peat preservation, however, is that there are a large number of pre-existing concessions for peatlands within the moratorium.

One strategy for slowing emissions from peat while simultaneously allowing for increased palm production is to transfer these pre-existing concessions to already-degraded areas. This solution may be viable, as many palm oil producers claim to have no preference between peatlands and degraded areas. Unfortunately, many degraded areas are classified as forested areas, while many peat swamps are not, and so are not protected. As a result, palm oil companies that want to be certified as sustainable end up degrading unprotected peat swamps rather than producing on land already degraded by settlement. Fixing this issue could require a number of legal reforms, including allowing for multiple reclassifications, that is, legal procedures that swap land-use classifications. Successful swapping, however, would require efficient government coordination as well as consistent data across ministries in terms of where concessions are, where peatlands are, and to whom concessions belong. Currently, due to coordination issues between local government agencies, this may not be realistic.

Additionally, it has been suggested that some agricultural producers are willing to pay smallholders to drain peatlands in areas not classified as forest. This opens up the land for development and permitting, as it is already degraded and shifts the PR burden to smallholders. Of course, this kind of under-the-table activity is difficult to confirm, and even more difficult to prevent.  On the other side of the issue, many of these companies have recently committed to zero-deforestation policies. Even if such commitments are genuine, however, mitigating emissions from peatlands will require more than just prevention of further draining—true mitigation will require peatland restoration. As a result, the outlook for preventing peatland degradation and the resulting compounding CO2 emissions, is not optimistic. While use of degraded land for palm oil production and restoration of peatlands holds promise for slowing emission rates, the legal challenges involved  are a major barrier, and the monetary and logistic challenges involved in peatland restoration are prohibitive.