As can be seen from the chart below, Canada’s oil and gas sector and electricity sector, both subsets of the energy production sector, account for approximately 37% of the country’s total greenhouse gas (GHG) emissions. The oil and gas sector is responsible for 173 MtCO2e and the electricity sector produces 86 MtCO2e. Canada’s oil sector emissions can be further divided into conventional oil production, natural gas production, and the oil sands. 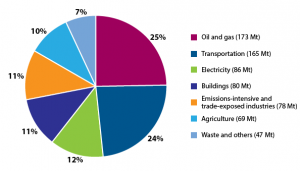 Despite their contribution to the country’s overall GHG emissions, emissions from Canada’s electricity sector are projected to drop from 121 MtCO2e in 2005 to 82 MtCO2e in 2020. This is predominately due to Canada’s success in introducing natural gas and hydropower as alternatives to coal fired generation. In addition, use of McKinsey & Company’s Climate Desk analysis tool shows the abatement potential of the electricity sector to be 81 MtCO2e in 2030 (19% of total cross-sector abatement potential).

In contrast, emissions from the oil and gas sector are projected to increase sharply, resulting in a difference of 38 MtCO2e between 2005 (162 MtCO2e) and 2020 (200 MtCO2e). Thus, the oil and gas sector’s contribution to Canada’s overall emissions is expected to increase to 27% by 2020. Driving this increase in sector emissions is the rapid expansion of Canada’s oil sands, which requires a more energy-intensive and carbon-intensive extraction and processing methods than those used with conventional oil.

GHG emissions from the oil sands are projected to nearly double in the next six years, resulting in approximately 101 MtCO2e by 2020. By that time, it is projected that Canada’s oil sands emissions will account for slightly more than 50% of emissions within the oil and gas sector and nearly 14% of the country’s total GHG emissions. It should also be noted that use of McKinsey & Company’s Climate Desk tool reveals that the oil and gas sector’s 2030 abatement potential is expected to be 52 MtCO2e (12% of total abatement potential). However, actual abatement within this sector will depend largely on the deployment of clean technologies and stronger regulation at the provincial and federal levels.

Alberta’s carbon pricing system, known as the Specified Gas Emitters Regulation (SGER), currently serves as the primary regulating body of the oil sands emissions. Under the SGER, heavy emitters are forced to reduce their emissions intensity by up to12% relative to their baseline level of production.  If firms are unable to meet this target, they must purchase carbon emission offset credits or pay a fine of $15 per ton. While the SGER provides some financial incentive for firms to reduce their emissions, it lacks in stringency.  Firms are able to remain in compliance even as their emissions continue to increase.

Given that Alberta is responsible for more GHG emissions than the other provinces (the second highest-emitting province, Ontario, trails by 82.4 MtCO2e), it faces considerable pressure to strengthen the effectiveness of its carbon pricing system. Adding to this pressure is the continued absence of federal of oil and gas regulations. Alberta’s leaders are acutely aware of the urgency of the situation, and are considering adopting a more stringent carbon levy when the SGER expires later this year.

In short, current figures indicate that Canada is making headway in its effort to reduce GHG emissions from the electricity sector.  However, the sharp rise in emissions in the oil and gas sector, due to the expansion of the Alberta oil sands, will require stronger mitigation efforts at the federal and provincial level. With the current need for stronger federal oil and gas regulations and an enhanced version of the SGER, both the federal government and Alberta’s government are in a position to make major headway in reducing emissions in the energy production sector. Hence, decisions made over the coming months will likely dictate the direction of Canada’s climate change policies, and shape how the country’s oil production ambitions will align with its emissions abatement goals.