On April 15, 2014, EPA released five technical white papers on potentially significant sources of emissions in the oil and gas sector. The papers covered compressors, emissions from well completions and ongoing production of hydraulically fractured oil wells, methane leaks, liquids and unloading, and pneumatic devices. This effort was part of the Obama Administration’s Strategy to Reduce Methane Emissions as part of the overall Climate Action Plan. These papers focus on technical issues covering emissions and mitigation techniques that target methane and volatile organic compounds (VOCs).  All five white papers present data and mitigation techniques for emissions from each source as well as issues not addressed in the EPA’s 2012 New Source Performance Standards (NSPS) for VOCs. These proposed rules, if enforced, will yield a 95% reduction in VOC emissions from more than 11,000 new hydraulically fractured gas wells each year. 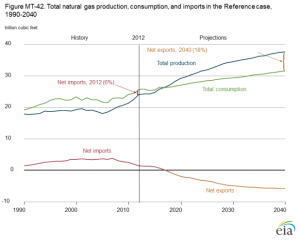 On April 17, 2012 the EPA issued cost-effective regulations, required by the Clean Air Act, to reduce harmful air pollution from the oil and natural gas industry while allowing continued, responsible growth in U.S. oil and natural gas production. Among these new rules include the first federal air standards for hydraulic fracturing wells based upon cost-effective technology and practices such as those in the EPA’s Natural Gas STAR Program. These rules also included several other sources of pollution for which there are currently no federal standards.

According to the EPA, Reduced Emission Completions (RECs), also known as “green” completions, “use specially designed equipment at the well site to capture and treat gas so it can be directed to the sales line. This process prevents some natural gas from venting and results in additional economic benefit from the sale of captured gas and, if present, gas condensate.” The EPA has identified a transition period (until January 1, 2015) to ensure green completion equipment is broadly available. During this transition period, fractured and refractured wells must reduce their emissions through combustion devices (flares).

The EPA summarized their findings on green completions in a recently released report based upon case studies in the Permian Basin, and the Bakken and Eagle Ford Shales. Their preliminary conclusion was that limited information is available on both controlled and uncontrolled emissions from hydraulically fractured oil well completions and recompletions. They also identified studies in which the level of uncontrolled methane emissions ranged from 44,306 tons per year to as much as 247,000 tons per year.  Finally, they referenced a study by the University of Texas which found that RECs, in certain situations, can be an effective emissions control technique for oil well completions when gas is co-produced, but due to dangers such as well pressure and gas content below the surface, RECs may not always be technically feasible at co-producing wells.

All of these efforts seem to indicate that the EPA is serious about limiting the emissions from upstream oil and gas production, especially as America’s domestic production skyrockets.  It is this author’s hope that the EPA will continue to receive executive and judicial support to fulfill their obligations to the American public and will actually hold the industry accountable for its environmental impacts.  E