On October 10, PASP welcomed acclaimed translator and poet Stanley Lombardo for a brief visit! His trip to the University, organized by the Plan II Honors Program, was to perform selections from his Achilleid of Statius and Iliad of Homer featuring scenes of Achilles and his mother, Thetis. 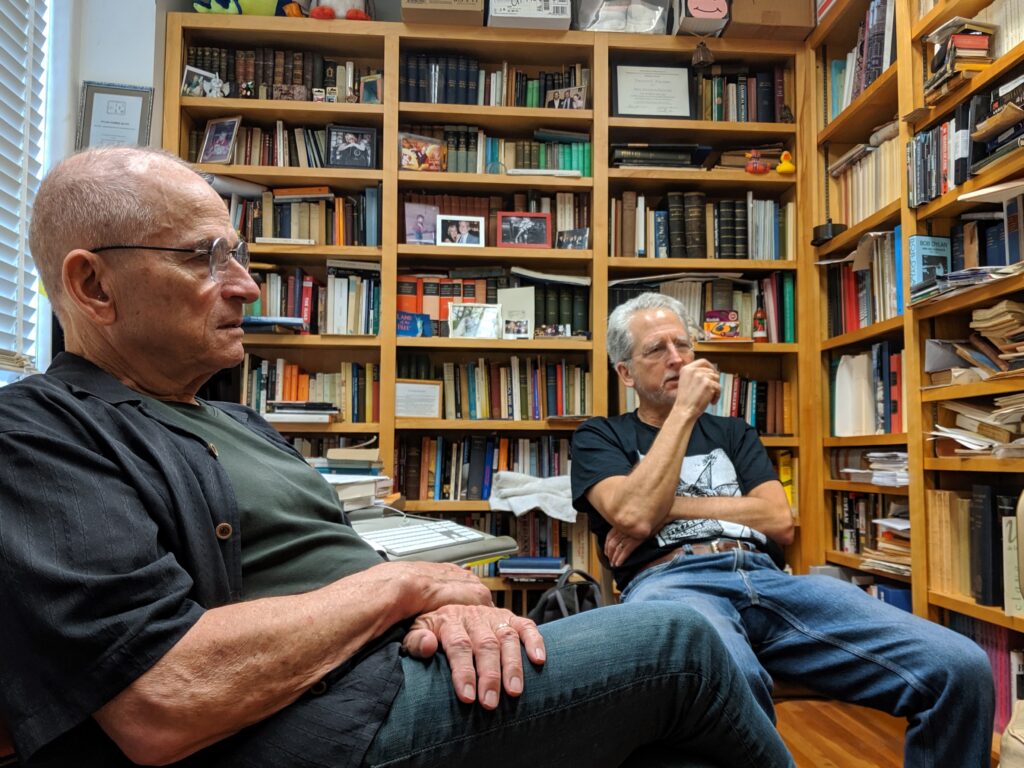 It has been many years since his last trip to the University of Texas for a performance, but Stanley did not miss a beat. The atmosphere conjured by his performance, the selections from the poems and their shared themes made the night an absolute wonder. Scenes from both poems, though nearly a thousand years apart in composition, echo each other, fluidly transition into one another. In both, Stanley vividly expresses Thetis’ concern and her looking after Achilles: by hiding him on Scyros in a virgin’s dress in Statius, to later protecting Achilles in war, when she suits him in his new armor crafted by Hephaistos in the Iliad.

To honor Lombardo’s long tradition of performing Homer and other poets at UT, PASP is making accessible an mp3 of recordings of his reading Homer’s Odyssey on KUT Radio. It comes from his visit to the University of Texas in 1999, almost twenty years to the exact date (October 4) of his visit last week (October 10). Then, he was participating in the Plan II symposium “How War Changes Lives” organized by Plan II Honors and professor Tom Palaima. In this recording, Lombardo reads three scenes from his Odyssey translation: Odysseus’ attack on the suitors, Penelope’s recognition of Odysseus, and Telemachus’ visit to Pylos in Book 3. In addition, Palaima joins him on this recording with a reading of his own of the Odyssey in Greek. Throughout the recording, they converse on themes of war as they relate to veterans of the in Homer and to the present day in the United States.

The recording has a run length of twenty six minutes. Connect to the file by the URL below:

At 00:00, the recording begins with Tom Palaima introducing Stanley Lombardo and his works.
At 01:27, Lombardo introduces the Odyssey and what scenes he will read (Odysseus and the Suitors, to begin).
At 03:30, Palaima reads the Odyssey in Greek
At 04:10, Lombardo reads the scene of Odysseus confronting the suitors in his home
At 10:59, Lombardo reads of Penelope’s recognition of Odysseus
At 16:29, they break and discuss themes on war, the “How War Changes Lives” symposium
At 23:51, Lombardo finishes the segment with Odyssey Book 3, of Telemachus in Pylos

We thank the Plan II Honors Program for organizing the performance on October 10, 2019 and look forward to future works by Stanley. 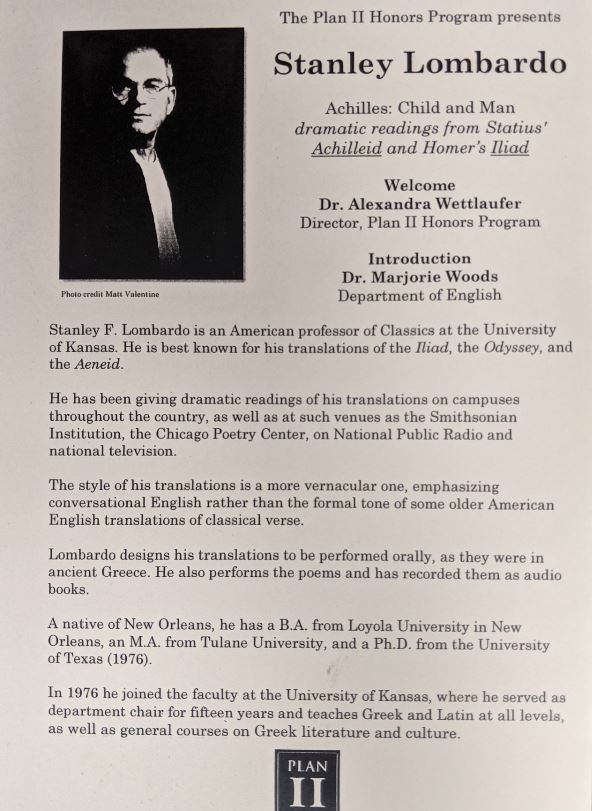