Now online are the remaining items of correspondence from the Emmett L. Bennett Jr., collection at the Texas ScholarWorks (TSW) online repository at our Program and Aegean Scripts directory. These make up a miscellaneous set of approximately one hundred and twenty five items, consisting of correspondence with authors whose last names end with the letters A through M. The correspondence spans the period from the early 1950s up to the mid-1980s and captures the broad range of people with whom Bennett worked throughout his life. Topics span the vast interests of Bennett’s professional life, from the publication of the still chief bibliographical journal for Mycenaean studies and Aegean prehistory Nestor (now published on-line at the University of Cincinnati), to his readings of the Pylos tablets, to the academic year (1958-59) he spent as a faculty member in the department of Classics at the University of Texas at Austin. My specific task (completed remotely due to COVID-19 distancing) was creating and reviewing the metadata to these letters, a task that meant reading through each item and following PASP and TSW guidelines for completing them consistently with our other projects.

Though I was introduced to Bennett’s work and life from other PASP projects and coursework on Aegean scripts, I had mainly related his work to the decipherment of Linear B and little else. While he is known as “the Father of Mycenaean Paleography,” I lacked a full understanding of what went into earning this title; however, working closely with this series of correspondence has helped me to appreciate more fully Bennett’s work on Linear B, contributions up to and after its decipherment, and his serious collaboration with his colleagues. 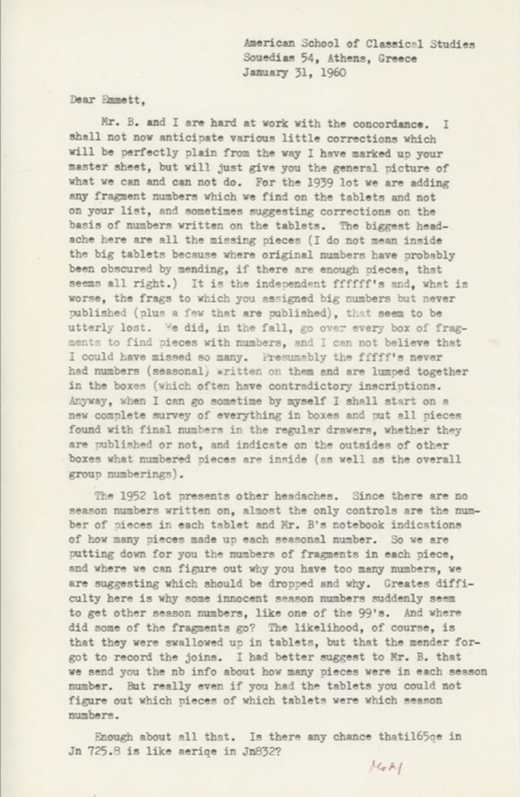 In this batch, over fifty items of correspondence are with the archaeologist Mabel Lang, who taught throughout her career at Bryn Mawr College. Famed for her work on the Athenian agora and Ancient Greek history, she began her early career assisting Carl Blegen with the publication of then recently excavated material from Pylos, including its frescoes and Linear B tablets. Spanning for about ten years from 1957-1968, most of her items of correspondence concern how her and Bennett were studying and interpreting the new Linear B tablets that were being uncovered in the yearly excavations at the site on Ano Englianos, their thoughts on how fragments joined with each other, and the paleography of signs.

In a letter from Lang to Bennett dated January 31st, 1960 (see above), she describes how the work often included sifting through boxes of tablet fragments, even though some of the items “never had numbers (seasonal) written on them and [were] lumped together in the boxes (which often ha[d] contradictory inscriptions).” Then, like a 5,000-year-old puzzle, they had to fit them together based on their findspots, shape, paleography, sometimes even the wicker-basket markings on the backs. They also had to photograph some of the tablets. Despite these challenges, their attention to detail and appreciation for precise, well-grounded research are manifest in their writings, where they record some of the earliest readings of the Linear B tablets post-decipherment. One sees such dedication below, in a letter from October 23, 1958 from Emmett Bennett to Mabel Lang, where they also begin some of the earliest work in Mycenaean paleography, discussing sign variants and scribal hands to identify which fragments fit with each other: 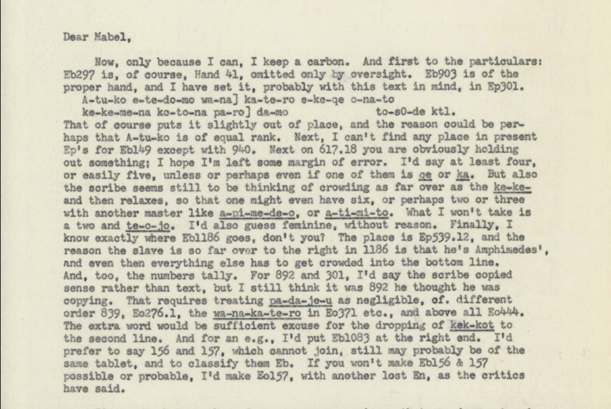 In addition to their research, Lang wrote Bennett about historical moments in their field and the reception of different publications they completed. In their letters, Lang’s style and personality shine through. In one letter, dated August 28, 1964, about the discovery of Theban tablets (see below), Lang exhibits her cleverness, the professor writing that she got away with a very early reading of most of the tablets because “the girl in charge did not know ‘til too late that I could read them.” In another letter, Lang jokes that she thinks Bennett’s ‘Flora Stamps’ are a good trademark that could set a fashion. She admits in the same letter that she has been getting more acknowledgments since the publication, “most notably from John Chadwick, who comments rather most extensively. I suppose he can’t help being slightly condescending: ‘While not agreeing with all your suggestions, I think you have made a good job of the publication.’” Lang’s humor, wit, and persistence in the pursuit of knowledge were refreshing as I read the series, letter by letter, in order to complete this project. They capture Lang’s vibrant personality, opinions and convictions, frustrations and dilemmas, and her sense of humor. 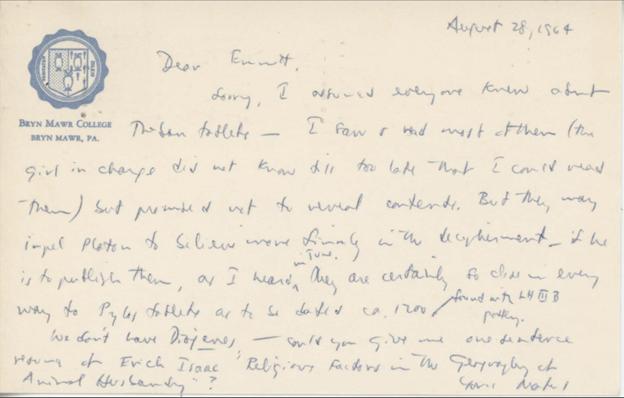 Though Lang was a devoted scholar, traveling the world, she was still involved in inspiring others to pursue archaeology and study. This comes to light in further in a letter dated October 15th, 1965, where an elementary student thanking Lang for being allowed to attend her lecture at a local high school. She provides drawings of their favorite things that Lang talked about, a deer fresco, a throne, and some interesting fresco patterns, and writes that she wishes she could be an archaeologist at Pylos. While we do not have Lang’s reply, one can observe how much of an impact she made on this student in particular and, in extension, her love for inspiring and exciting others about archaeology.

Bennett at the University of Texas at Austin 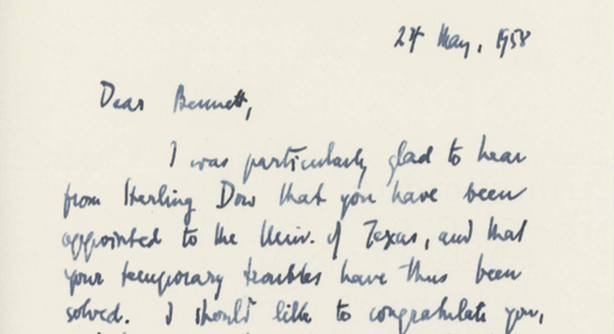 While Lang’s correspondences made up a large portion of the collection, there were other writings as well that document the turning points in Bennett’s life. Noteworthy is a letter from Evelyn Blyn dated October 10th, 1958, congratulating Bennett for his hiring at the University of Texas. His position was brief here, lasting only from 1958 to 1959. Yet, through serendipity, his writings found their way back to the university now in the PASP archives founded by one of his students, Tom Palaima.

Blyn’s letter is not the only one congratulating Bennett. In another by Victor Ehrenberg dated May 24th, 1958, the author writes “I am particularly glad to hear from Sterling Dow that you have been appointed to the Univ. of Texas, and that your temporary troubles have been solved.” The mention of “temporary troubles” concerning his appointment grabbed my attention. What sort of troubles? Making ends meet? I found another letter, from Albrecht Goetze, that reads “It was nice to hear from you and that you have found a new home down there and are continuing your work in Minoan,” the word choice once again: continuing work? Was this ever at risk? Curious, I looked at Lang’s correspondence again and made the connection in a letter from March 12, 1958, advising Bennett on whether he should accept a one-year appointment or a day government position. In it, Lang asserts that he must not “put [him]self in a position where [he] will have to give up Mycenaean for even a couple of years unless there is absolutely no alternative,” and that “a government job taking eight hours a day would seem preferable to a day and night involvement with Roman coins.” While the latter correspondence is likely referencing an employment opportunity aside from the University of Texas, these correspondences seem to suggest that Bennett was facing a transitional period in his career when he moved from Yale to UT and finally to the University of Wisconsin–Madison, seeking a position that would allow him to continue his work, even if a temporary one. This is also confirmed in another letter (dated in the same period, on March 14, 1958) between Carl Blegen to Emmett Bennett, where Blegen advises Bennett on the possibility of shifting careers from Linear B to Roman numismatics. Thankfully, Bennett did not change his interests. His short position at our university might have preserved his career in Linear B, as he soon after accepted a tenured professorship at the University of Wisconsin at Madison as a permanent fellow in the Institute for Research in the Humanities, where he worked for decades on Aegean scripts until his retirement.

These items of correspondence complete the digitization of the corpus of the Correspondence series from the Emmett L. Bennett Jr. collection, started as early as 2012 and continually worked on by former PASP research assistants and archivists up to this day. They join the near 1,000 items from this series already online at Texas ScholarWorks, of letters with figures like Carl W. Blegen, Michael Ventris, Alice Kober, John Chadwick, among many other luminaries.

Working with metadata in this collection has reflected the beauty of the archive in several ways to me. Primarily, it underscored the importance of primary sources in understanding historical figures and their work. In my case, Bennett and Lang’s correspondence helped me understand with much greater depth their tone and voice when collaborating, interpretations of events in their lives, and personalities. It helped me realize that, before working with the collection, I had already subconsciously made assumptions of the type of person that Bennett and Lang would be: aloof though ingenious. Constructing narratives of behavior based on how society and culture present academics to be, humans do this often. It is a dangerous habit, especially for scholars, who examine and communicate the history of the world to the public. Hence, above everything, I learned the importance of psychology in the archives, of those I study and my own. The importance of listening before evaluating, of humanity in academic research.