From September 4, 2022 until September 22, 2022 Tom Palaima was a Visiting Scholar / Guest Researcher within Rachele Pierini’s Marie Curie project Trans-PLANT (in collaboration with Marie-Louise Nosch), hosted by the Center for Textile Research (CTR https://ctr.hum.ku.dk/) and the Saxo Institute (https://saxo.ku.dk/) at UCPH (University of Copenhagen).

Tom was doing his own research work on (a) Mycenaean textual interpretation; (b) problems with palaeography in the Linear A and Linear B and Cretan Hieroglyphic scripts; and (c) scholarly correspondence among and between Carl Blegen, Sir John Myres, Alice Kober, Emmett L. Bennett, Jr., John Chadwick, Jean-Pierre Olivier, and Johannes Sundwall, among others. He was also rereading slowly, like sipping fine wine, Kurt Vonnegut’s Slaughterhouse-Five.

He also gave a public lecture at the Danish Institute for Advanced Study in Odense on the morning of September 7: “Bob Dylan as Poet of Feeling”. That lecture was recorded and is presented here:

In the afternoon he led a course-related discussion seminar on “The Killing of a President: Bob Dylan’s ‘Murder Most Foul’.”

On September 13, as dj, he played selected Bob Dylan songs at the cafe/bar and cultural platform Sorte Firkant Blågårdsgade 29 in Copenhagen.

The CRT Copenhagen University sessions were designed to cover on successive days the following general topics or issues:

A. Vn 130: perfume manufacture or pottery production? We were examining the development of ideas about this tablet from Leonard Palmer in the 1950’s-60’s to its virtually being ignored for a long time. It is not treated in Shelmerdine The Perfume Industry of Mycenaean Pylos 1985 nor in either edition of Docs 1956 or 1973. It was identified and interpreted as a pottery production text (Galaty Mycenaean Palaces 1999 and Rethinking Mycenaean Palaces 2013) according to a proposed hypothesis of the key heading term (o-ze-to) by Leonard Palmer (The Interpretation of Mycenaean Greek Texts 1963). Palmer’s treatment of ze was proved phonologically impossible and Palmer himself rightly repudiated this interpretation.

The current valid interpretation of Vn 130 is as a text dealing with perfumed oil production as proposed by Palaima (“Pylos Tablet Vn 130 and the Pylos perfume Industry” 2014) with support from Melena and Peter Warren. The problem is that Galaty’s ‘interpretation’ of this key text is widely read in the general literature in explicating and reconstructing the pottery manufacture industry in palatial Messenia.

The key question raised here is the following: How do Mycenological specialists best mitigate the widespread impact of the use of a faulty interpretation, as fewer and fewer specialists deal with the texts firsthand and general works like the three Companion volumes edited by Duhoux and Morpurgo-Davies (Companion to Linear B: Mycenaean Greek Texts and their World, Bibliotheque des Cahiers de l’Institut de Linguistique de Louvain [BCILL] 2008, 2011, 2014) have to be extremely selective in what texts they treat?

B. The heading of the Ta series and the meaning of te-ke. We explored yet again whether it is appropriate to reject that in this context te-ke can have the meaning ‘buried’. Proponents of maintaining this interpretation make it the Palmer-Duhoux-Palaima thesis with modifications of Palmer’s interpretation over time. The materials listed hereon are no longer considered burial goods per se, but rather paraphernalia to be used in putting on a commensal ceremony.

In regards to te-ke in particular, most interpreters overlook carefully worded language in the latest edition of the LSJ and in the view of John Chadwick. They also apply a rule derived from and developed for Greek historical, mainly literary, documents and apply it without considering specialized contexts both to Linear B texts and to Roman imperial tomb inscriptions.

C. Objects and numbers in the Pylos Ta series. A careful reading of each tablet of the Ta series and how and why the ‘scribe’ of these texts entered information as he did and for whom he did so. Comparison with the various transcriptions of the texts historically and recently. We discussed the ramifications of our understanding of feasting ritual and practices and tied in recent work published by Blackwell and Palaima (2020 and 2021) and forthcoming work by Blackwell, Morton and Mahoney. We pointed to the rich literature on the Ta series, especially now Rachele Pierini, Alberto Bernabé and Marco Ercoles Thronos: Historical Grammar of Furniture in Mycenaean and Beyond (Pàtron Editore: Bologna 2021) with very full references.

D. Epistemological problems with key place names: a-pu2 pa-ki-ja-ne pa-ki-ja-na pa-ki-ja-ni-ja and other place names. These pertain to problem points addressed, but still not fully resolved in how to approach the rendering of place names potentially non-Indo-European in origin and how these are to be linked to place names preserved in Homer and attested among later Greek toponyms widely used or in later Greek lexicographical or geographical studies.

3. Day Three: Correspondence among the principals working on the decipherment and the techniques they employed using Emmett Bennett as the node who a. did much to establish sound texts; b. shared material with Kober; c. gave sober and helpful criticism and even developed a strong rapport with Michael Ventris at a time when Ventris was uncertain about what direction(s) to take and later until September 7, 1956; d. from 1947 into the early 2000’s helped with careful primary publications, including the early iterations of transcriptions of the Knossos tablets and the pre- and post-decipherment publications of tablets from Pylos and Mycenae. Bennett’s correspondence with John Chadwick is especially illuminating as is his editing of Nestor, the latter capturing his playful spirit.

There was much constructive give and take among all participants. We reached a general consensus that discussion meetings like these centered on specific problems within an atmosphere of open exchange of ideas were essential to the health of Mycenology and work on Aegean and Cypriote scripts generally. Otherwise the fields break down into self-contained fragments and run the risk of perpetuating insular and isolated ideas and schools of interpretation.

This is very much in keeping with the design and spirit of MASt seminars. These quarterly on-line seminars began on the Harvard Center for Hellenic Studies Classical Inquiry web site early in 2020. They are now changing to the Classical Continuum Open Access Rapid Publication Platform of the New Alexandria Foundation also centered at and supported by Harvard University. They aim at providing a forum for learned presentation of new ideas and rethinking of old problems followed by open and free critical questioning and discussion. See, for example, MASt July 23, 2021 published atypically January 13, 2022.

Tom also gave a talk to members of the CTR and of Copenhagen University on Wednesday afternoon September 14 with a title “Humankind and people of sense in small places” adopted and adapted from Henry James: “Imbeciles in great places; people of sense in small, and mankind generally unhappy.” The general theme of his talk was to stress the social value of serious humanistic research at a time when administrators within universities are taking actions that de-emphasize the importance of the humanities and redirect resources that used to go to studying the humanities.

During his stay Tom also assumed from Marie-Louise Nosch as head of the Danish Royal Academy the royal prerogative to appoint Jörg Weilhartner of the Austrian Academy of Sciences a wanaks of a very special sort:

or specifying the outcome in Danish: 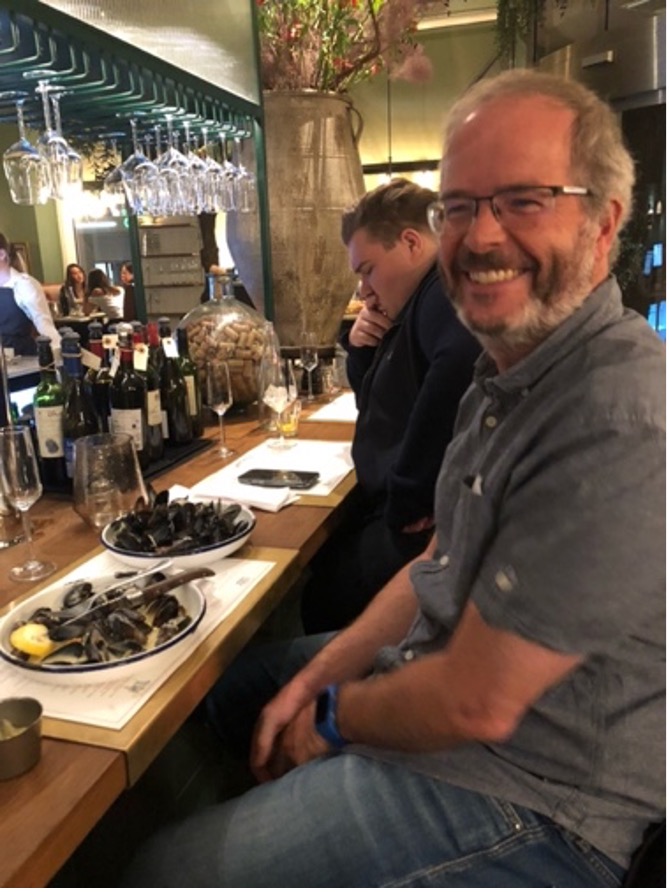