Juneteenth (variously called Emancipation Day, Jubilee Day, Freedom Day, or Cel-Liberation Day) is a holiday that commemorates the date when news of the Emancipation Proclamation reached the enslaved black people in Texas. “Juneteenth” is a portmanteau word formed from “June” and “nineteenth.” 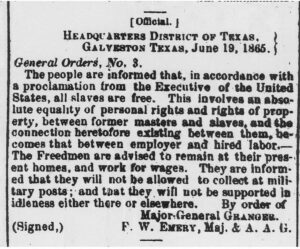 Although the Emancipation Proclamation went into effect on January 1, 1863, enslaved Texans were not apprised of this fact until Union Major General Gordon Granger issued General Order No. 3 in Galveston, on June 19, 1865 (Acosta, 2020). While the text of General Order No. 3 announced that “all slaves are free,” it also stated that “Freedmen are advised to remain in their present homes, and work for wages.”

In Austin, freed persons organized the first Emancipation Day celebrations in what is now Eastwoods Park, just north of present-day Dean Keeton Boulevard (Hasan, 2017). Photographs of Austin’s Juneteenth observances in 1900, taken by a Mrs. Grace Stephenson, including this one of celebrants, are available in The Portal to Texas History. According to the Portal metadata, Mrs. Stephenson later sold her photos, along with a report of the day’s festivities, to the San Francisco Chronicle. A search for the article in America’s Historical Newspapers was unsuccessful. A reference staffer from the San Francisco Public Library replied that SFPL is unable to respond to these kinds of reference questions at the moment.

As freed persons dispersed from Texas, they carried with them the tradition of celebrating emancipation on June 19th. The database African American Newspapers, Series 1 has several articles about communities’ Juneteenth celebrations. The earliest reportage was published in the Parsons (KS) Weekly Blade, in 1895.

In 1979, Texas State Representative Al Edwards (D-Houston) introduced House Bill 1016, legislation that led to Texas becoming the first of these United States to declare Juneteenth an official holiday. Today, Juneteenth is an official holiday or observance in 46 states and the District of Columbia (National Juneteenth Observance Foundation, n.d.). While not observed by the University of Texas, Juneteenth (Emancipation Day) is an official public holiday in the state of Texas. Do not get too excited by this, as the state of Texas also lists Confederate Heroes Day on its official calendar of holidays (Texas State Auditor’s Office).

The United Kingdom, which abolished the slave trade in 1807, and passed the Slavery Abolition Act nearly 30 years before the United States, has a related observance on 18 October—Anti-Slavery Day, whose unfortunate name raises inescapable questions about the other days of the year. 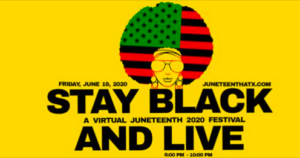 This year, with parades and gatherings being deemed unwise, Austin celebrates Juneteenth virtually. Stay Black and Live will be held online from 6 to 10 p.m. on Friday, June 19, 2020. There will almost certainly be a performance of “Lift Ev’ry Voice and Sing,” also called the Black National Anthem. Learn the words, learn the tune, raise your voices in song on Friday, and raise your voices in citizenship every day.

Selected Resources from the UT Libraries