↓ Skip to Main Content
Home › Uncategorized › A Rhino’s Worth: How Much Would You Pay?

A Rhino’s Worth: How Much Would You Pay?

How much is a rhino worth to you? A hundred dollars? A thousand? Hundreds of thousands? It’s not likely a question you are asked every day. If you are like me, you initial answer was, “a little” or perhaps even, “not much”. After all, with all the other pressing causes in the world, how much attention, money, and energy can we expect people to contribute for animals they rarely see? Wildlife conservation isn’t a topic that often arises when we discuss international emergencies. Nevertheless, the current wildlife crisis our planet is facing should not, and cannot, be ignored.

During this year alone, over 700 rhinos have been poached for their horns in South Africa. 700. For a species much more populous like the white-tailed deer, such an attrition rate probably wouldn’t make much of a difference in terms of species survival. But for rhinos, of which only an estimated 29,000 are left in the wild, this rate is alarming. Rhinos are not the only animals being poached into extinction. Elephants, leopards, and pangolins are a few of many animals that have seen a stark population decline in recent years.  If current poaching and wildlife trafficking rates continue, rhinos and elephants may become extinct in the wild within the next two decades. They won’t be the first. The Golden Toad, the Baiji River Dolphin, and the Spix’s Macaw have all gone extinct in the past decade.  While conservation efforts to preserve these animals exist, the problem is extraordinarily difficult to address. 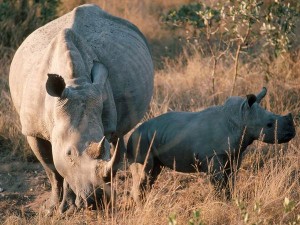 This difficulty stems largely from the fact that poaching is not a black and white issue. Some poachers live in abject poverty, selling endangered animal parts to make ends meet. These individuals see little of the money wildlife traffickers make upon selling the animal parts. Yet, the money they do receive is enough to turn even those hired to protect the rhinos against them. For instance, three Kruger National Park employees were arrested for rhino poaching last month. In 2012, a Ugandan military helicopter was spotted flying over Garamba National Park. A herd of dead elephants, shot from above and tusks taken out, were found nearby. Not only was this an instance of illegal poaching but also a violation of state sovereignty.  The poachers were never caught or prosecuted.

Poaching doesn’t go unnoticed by source countries.  Nations such as Kenya and Namibia rely on money gained from wildlife tours. Unfortunately, the governments of these countries often cannot afford to provide the security necessary to defend the animals.  Nor is catching the leaders behind wildlife trafficking easy, as many evade arrest in source countries and hide behind their national government for protection.

The demand side of wildlife trafficking is just as difficult to combat. Wildlife conservationists attribute the recent uptake in rhino poaching to increased demand from consumers in Vietnam and China– where some people hold the belief that the horn, ground to a fine powder, can cure cancer. While the horn sells for a steep price in these countries (nearly $30,000 a pound), the unavailability of radiotherapy machines makes the horn a last resort for desperate patients and family members. While educating potential consumers on the true medicinal effects of rhino horn (there are none) may reduce a sliver of demand, it is also possible that consumers will continue to demand the horn, as trying an ineffective medicine is viewed as better than doing nothing at all.

The complexity of wildlife trafficking is discouraging, and I realize there is only so much I as an individual can do to help preserve wildlife. But, to me, it would be a shame not to try. I don’t want to wake up 20 years from now to hear rhinos have gone extinct, and I don’t want to have to explain to my children what they looked like. When my future children ask what a rhino is, I want to be able to say to them, “Here, pack your things. Let’s go to the wildlife reserve and I’ll show you.”