The biblical tale of Noah’s Ark is a familiar one: God saves Noah, his family, and many pairs of animals from a flood that drowns the rest of the Earth. Now let us use this story as a metaphor for species conservation efforts in the United States. Noah (the United States) has limited space in his ark (a limited budget for species conservation); How should he decide which animals to let in the ark (how should we decide which projects to fund)? 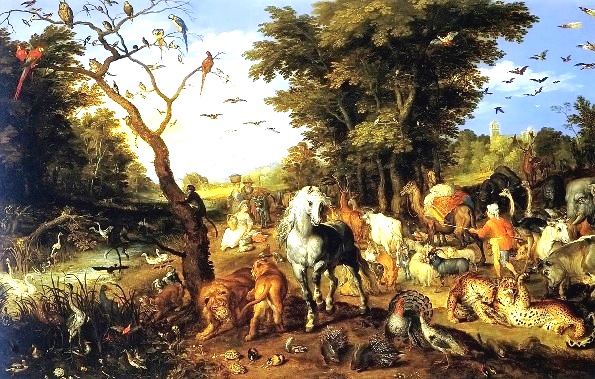 This is the Noah’s Ark Problem of today – allocation of limited budget dollars to competing species. In a situation where the budget is given (i.e. cannot be raised for any reason), a cost-effective allocation of dollars would maximize attainable diversity. “Diversity,” in this primarily economic theory, refers to the biological distinctiveness of each species, or how “different” a species is from its closest biological relative. Distinctiveness is valued here for its indirect utility, and it represents both the use and non-use values of the species’ contribution to diversity.

From this theory, and the desire to achieve cost-effective species protection, Martin L. Weitzman created the Noah’s Index, a ranking system for prioritizing conservation spending. The index is reprinted below: 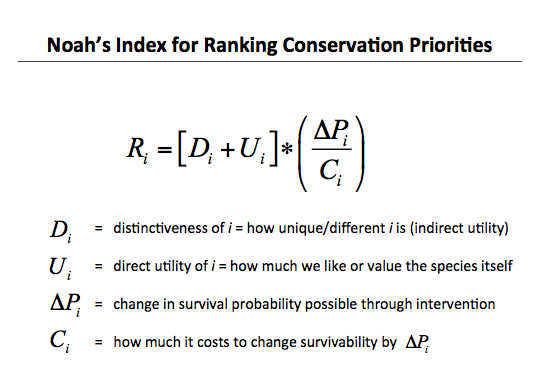 As one can see, distinctiveness is weighted equally in this formula with the “direct utility” of a species, which refers to how much humans like or value the species. Again, both use and non-use values are considered as factors in direct utility. Once these two factors are added together, the sum is multiplied by the possible change in survival probability through intervention divided by the cost of changing said probability. This is the cost efficiency aspect of the formula, as it is would be highly cost inefficient to spend a lot of money on a species with a low possibility of changing its survival probability through intervention. In theory, this ranking would then be applied to determine the level of spending for each species in need of conservation.

This is not, however, how the United States makes its spending decisions. Under the current system, the Endangered Species Act (ESA), as carried out by the United States Fish and Wildlife Service (USFWS) and the National Marine Fisheries Service, is outdated and invalid in regards to its decision framework for listing species and spending funds on their preservation, as the U.S. Congress has not reauthorized the ESA since 1992. Presently, the USFWS lists a species as either “threatened” or “endangered” if sufficient scientific data exists to warrant its listing and it passes the public comment period. The ESA specifically prohibits economic considerations in the listing of species. However, economic considerations can be taken into account in specifying boundaries of critical habitat. Furthermore, spending decisions must be guided by a “priority index,” which accounts for the species’ degree of threat, recovery potential, and degree of genetic uniqueness. Species in “conflict” with development are given tie-breaking preference over other species with the same ranking.

While these measures appear to be apolitical, a study by Andrew Metrick and Martin L. Weitzman (1996) revealed that scientific characteristics (such as degree of endangerment and uniqueness of the species) play a somewhat meaningful role at the listing stage, but are overpowered by visceral and political characteristics (such as physical size and degree to which the species is considered to be a “higher form” of life) at the spending stage. In spending decisions, there is no clear role played by genetic uniqueness and the effect of the degree of endangerment is unclear. With regard to the USFWS “priority ranking,” species with a higher priority do receive slightly more funding, but the “degree of conflict” measure (which is supposed to only break ties in the ranking) seems to have an effect 10 times larger than the priority ranking itself. These findings suggest that Americans’ preferences about preserving some species over others (usually large, “charismatic” species) are skewing funding decisions. This should be corrected. Furthermore although the ESA specifically prohibits economic considerations, benefits and costs are important factors implicitly, as most of the funding goes towards species protection in conflict with places of development. Currently the ESA is highly cost inefficient, as 50% of funds currently go to the top ten listed species.

The framework for listing and spending decisions under the ESA should be revised to reflect a truly scientific and apolitical agenda, with economic factors only considered in funding decisions. Listing should be based solely on scientific data gathered to assess the degree of endangerment of a species. This data should be gathered by a trustworthy agency other than the USFWS to prevent mixing of priorities into the listing stage. The Noah’s Ark Index could be used to correct the current inefficient spending decision framework. This framework would make both the human valuation of the species and the cost associated with preserving a species explicit factors in deterring the ranking, rather than implicit, which is important for transparency reasons. Furthermore, explicitly considering the economics of preservation (rather than implicitly) is important for cost effectiveness and will diversify the number and type of species that receive funding. This method should also prevent both subjective and visceral characteristics from influencing spending decisions and prevent distinctiveness from being removed from the calculations. To address the opportunity cost for protecting a species when it is in conflict with commercial or residential development, additional costs, such as compensating landowners for their private property, will need to be considered in order to disincentivize landowners from acting negatively towards endangered species.

**Most information from this post was gathered from Sheila Olmstead’s class on Environmental Resource Economics and Policy at the LBJ School of Public Affairs at the University of Texas at Austin.