‘Death to Poachers!’ and Why Animal-Lovers Rage 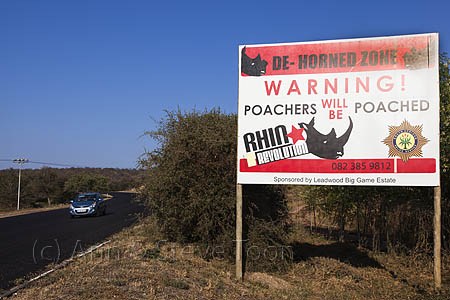 “Poachers will be poached” sign in South Africa. From www.fightforrhinos.com.

In my previous post, Shoot-to-Kill Policy: Injustice in the Name of Conservation, I argued that militaristic shoot-to-kill (S2K) policies are likely ineffective in curbing poaching in the long term. Worse yet, through the guise of wildlife conservation, regimes use S2K’s military ethos to justify arbitrary and excessive violence on human populations.

So why is it that animal-lovers—those who accept that S2K policies are ineffective—still advocate for proactive violence against poachers?

It is easy to understand why conservationists and animal-lovers are disheartened and outraged by persistent poaching. Tanzania, the largest source of trafficked ivory, loses 10,000 elephants per year to poaching. What may be more emotionally jarring are pictures of elephant and rhino corpses—their faces mutilated and tusks and horns stolen. The public also reads stories of the daily risks involved in a park ranger or conservationist’s job in the field. Some poachers are not afraid to initiate violent contact.

But poachers are not merely considered thieves or thugs. Online commentators on www.savetherhino.org consider poachers “scum of the earth.” Some proponents of shoot-to-kill policy, such as Edgar Friendly (see below), advocate for torture in addition to on-site execution. This response surpasses ‘tit-for-tat’ as rhinos and elephants are usually shot dead before their parts are removed.

It is absolutely unfair to characterize all proponents of shoot-to-kill policy as unapologetic advocates of torture. Still, the ‘war on poaching’ mentality promoted by particularly militaristic S2K policies has reduced poaching across Africa into dichotomies, which the public can rally behind. As in all wars, there are ‘our guys’ (the good ones) and ‘the other’ (the bad ones). An anonymous commentator states:

We should not conflate online comments with the thoughts of conservationists working on-site, and what conservationists think should not be conflated with the preferences and opinions of locals. But policy does follow money. Wildlife NGOs and IGOs exert influence over local policy because they provide much funding and expertise for conservation efforts. NGOs such as Save the Rhino must evoke sympathy from its donors and are ideally working toward objectives that donors regard as successes. Thus, the online comments I reference probably belong to a certain stratum of wildlife advocates, but their thoughts capture the militaristic attitude behind shoot-to-kill policies that encourage rangers to proactively ‘hunt’ poachers.

Michael Schwartz, consultant and freelance writer, laments that “African poachers are still lumped together by the public with cutting adjectives like ‘heartless’ and ‘evil.’” This simplification obscures the reality that poachers come in different shapes and sizes: the Al Shabaab poacher belted with bullets from across the border is not the same as the impoverished Gabonese who gets paid in stacks of salt for ivory. Policy-wise, there are different stakes involved in pushing back foreign militants and reconciling violence that occurs within communities. Yet these nuances, which should inform policy, are overlooked when S2K policies promote a ‘war against poaching’ attitude that effectively turns all poachers into enemies.

The good-bad/us-them dichotomies inherent in militaristic S2K policies are especially problematic when poachers and rangers reside in the same community. A war mentality invites distrust and violence into communities when a more sustainable anti-poaching strategy may involve rehabilitation, education, and resource distribution.

It is puzzling why some wildlife advocates call for militaristic shoot-to-kill policies even when they realize these policies are not effective at addressing the roots of the problem. Instead of simply attributing irrationality/intense emotion to these individuals, perhaps we can draw insight from the human psychology of problem-solving.

“…there is always a well-known solution to every human problem — neat, plausible, and wrong.”

A war on poaching is emblematic of a ‘neat, plausible, and wrong’ solution. Michael Schwartz contends that there is a direct relationship between simple language and simple policy: using simplified language to typify all poachers “will only lead to simplified solutions, which will not work on a continent so vast and complex.”

But when facing such a seemingly intractable and complex problem like poaching, we may all be secretly hoping for simple solutions that show us instant results. The body counts of poachers and heroic shoot-out stories give wildlife advocates the sense that the ‘good guys’ are finally fighting back without their hands tied behind their backs. Tackling poverty, lack of education and awareness, failed judicial systems, rampant corruption, and terrorism are likely more worthwhile and impactful endeavors, but they are also complex endeavors with results only discernable over decades (if at all). For those like Greg (see below) who are exasperated with failed judicial systems, executing poachers on the spot is considered a solution when compared to utter failure.

Simplicity may help us cope, but what do we lose in the process? First, sending weapons into communities and parks does little to address local poverty, and more likely destabilizes rule of law that undergirds stable and functioning economies. We also give less in attention and resources to campaigns that address ivory demand in countries like China and Vietnam. Reduced demand could delink ivory from its current euphemism, ‘white gold,’ and purge Africa’s parks of sophisticated poaching gangs. Finally, the policymakers that install militaristic shoot-to-kill policies in range countries may very well be doing so to protect their own asse[t]s. Addressing the root causes of poaching and trafficking—complex factors involving economics, politics, and governance—may be their biggest fear and our biggest hope yet.