Check out our video of the Wind Ensemble’s performance of Percy Grainger’s “Colonial Song.” We hope you enjoy!

You don’t want to skip over this one! This past semester, we had the privilege of being a part of Kevin Day’s new consortium, “Concert for Wind Ensemble.” Mr. Day joined us in Austin for several days leading up to the concert, and it was a joy to perform this unbelievable piece. We hope you enjoy! 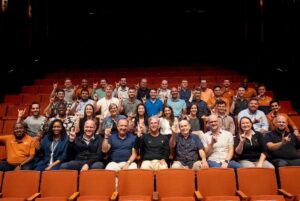 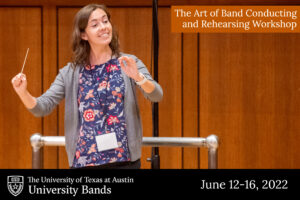 We ended our final Wind Ensemble concert of the semester with this powerful performance of Karel Husa’s “Music for Prague 1968.”

From the composer:
“Three main ideas bind the composition together. The first and most important is an old Hussite war song from the 15th century, Ye Warriors of God and His Law, a symbol of resistance and hope for hundreds of years, whenever fate lay heavy on the Czech nation. It has been utilized also by many Czech composers, including Smetana in My Country. The beginning of this religious song is announced very softly in the first movement by the timpani and concludes in a strong unison (Chorale). The song is never used in its entirety.
The second idea is the sound of bells throughout, Prague, named also the City of “Hundreds of Towers,” has used its magnificently sounding church bells as calls of distress as well as of victory. The last idea is a motif of three chords first appearing very softly under the piccolo solo at the beginning of the piece, in flutes, clarinets and horns. Later it reappears at extremely strong dynamic levels, for example, in the middle of the Aria.
Different techniques of composing as well as orchestrating have been used in Music for Prague 1968 and some new sounds explored, such as the percussion section in the Interlude, the ending of the work, etc. Much symbolism also appears: in addition to the distress calls in the first movement (Fanfares), the unbroken hope of the Hussite song, sound of bells, or the tragedy (Aria), there is also the bird call at the beginning (piccolo solo), a symbol of the liberty which the City of Prague has seen only for moments during its thousand years of existence.”
— Karel Husa

We hope you enjoy!

It seems appropriate that we perform a remarkable piece in such unusual times, and what is more unprecedented than a fanfare for woodwinds? We hope you enjoy the Wind Ensemble’s performance of Andrew Blair’s “(anti)FANFARE.”

We hope you are having a wonderful holiday season and are able to safely see friends and family over the next couple of weeks. Over the semester break, we will be sharing different videos from the past semester’s concerts. Today, check out our Wind Ensemble’s performance of Valerie Coleman Page’s “Fanfare for Uncommon Times.” We hope you enjoy!

We hope you are safe and enjoying this break with your loved ones! Check out our Wind Ensemble’s performance of Percy Grainger’s “Molly on the Shore” from their concert earlier this semester. We hope you enjoy!