(This blog post is part of my three-part series on France’s role as a stakeholder in our considerations of grand strategy in managing climate resilience and disaster risk in Oceania.)

Here I’d like to consider French interests in the region in economic, security, and diplomatic/humanitarian terms. Firstly, I focus on the resource trade and tourism industry to understand the economic considerations. Moving to defense and disaster relief commitments, I hope readers begin to get a sense of the French role. 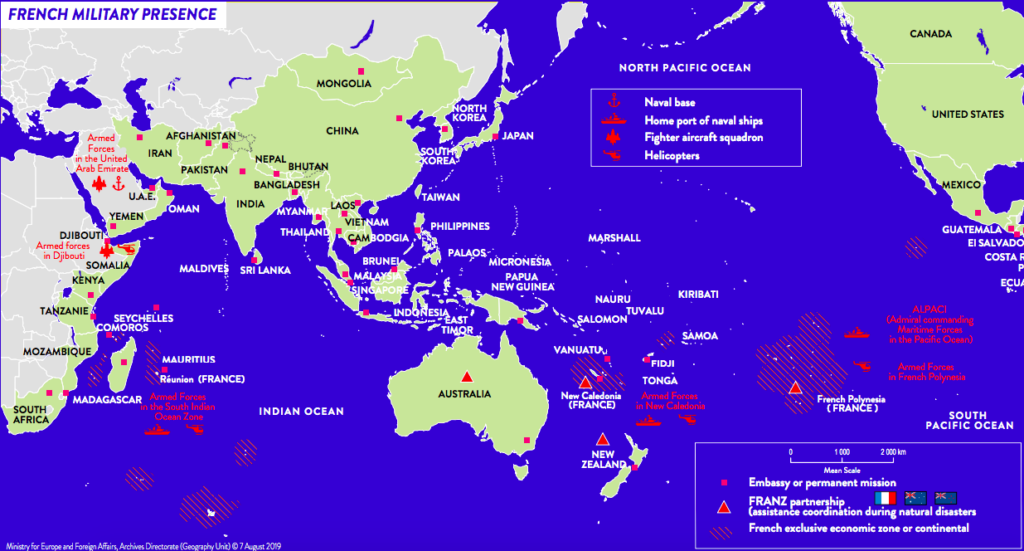 Since 1864, when nickel was discovered in New Caledonia, the French have had an economic interest in the Pacific mineral trade. Around 25% of the world’s nickel is in New Caledonia. French and other international companies continue to operate mining and smelting facilities in the territory despite increasingly volatile prices for the resource and protests over environmental concerns.

The tourist islands of Tahiti and Bora Bora in French Polynesia are known for their coral-filled lagoons, crystal clear waters, and bungalow hotels. Stunning white- and black-sand beaches, rugged mountains, and picturesque waterfalls attract visitors from all over the world to trek to these distant locations. The barrier reefs attract divers and snorkelers in particular. Tourism is a major shaper of life in these islands: Polynesian migrants from the outer archipelagos relocate to Tahiti seeking economic opportunities.

Cruises are a key source of tourism revenue due to the port services industry that cruise companies depend on and business that passengers and crew provide once on-land. The main island of New Caledonia, Grande Terre, is affectionately known by the French people as Le Caillou (the pebble). Anne-Marie d’Hauteserre of the University of Waikato in New Zealand, who has written on the phenomenon of cultural tourism in the French Pacific, argues that “demand is increasing for islands with ‘primitive’ cultures because tourists perceive these as more ‘authentic’” such as indigenous festivals and rituals.

Economically, I am still looking to get a better understanding of French trade with the Pacific islands. As far as maritime shipping goes, France commands a larger domain than any other external actor. As far as development goes, the French Pacific is more well-off than other Pacific island countries on the whole, but inequality is persistent due to the uneven distribution of wealth from these industries. Wallis and Futuna is the least developed of the three, where 60% of people practice subsistence living, which makes sense as it has neither the booming tourism industry of French Polynesia or the mineral resources of New Caledonia. (Only 15,763 people live on Wallis and Futuna, compared to a combined 573,127 people in the other two, according to the CIA World Factbook.)

Military bases in New Caledonia and French Polynesia allow France to be operational in the region. In terms of personnel, French soldiers serve as “sovereignty forces” based in Overseas France. As of 2016, there were 1,400 stationed in New Caledonia and 900 in French Polynesia according to the Ministère de la Défense and a total of 8,000 across the entire Indo-Pacific according to the Ministry for Europe and Foreign Affairs. Last year, the United Nations called on France and the United States (which operates three bases in Guam) to close their Pacific military installations in a General Assembly resolution adopted 124 to 8. As part of an ongoing commitment to decolonization that was intended to be completed by 2010, the UN condemned France’s failure to respond to UN requests about military activities on French Polynesia. Readers of my previous post will bear in mind the colonial history of France’s presence in the Pacific: the three remaining territories are considered Overseas France, not external entities. International intervention in French affairs, how Paris perceives the UN General Assembly resolution, fell on deaf ears.

The French security presence is likely to increase, if anything, given that Paris has indicated it wants to play a key role in countering China’s growing influence. President Macron pledged last year to join Australia ‘‘at the heart of a new Indo-Pacific axis” to shore up regional security, warning it is important to preserve a “rules-based development” and not have “any hegemony” in the region. Much like the United States, France appears to be sluggish to incorporate environmental realities into its defense strategy, which doesn’t mention natural disaster or climate risk mitigation or adaptation as relevant to the geopolitical context. 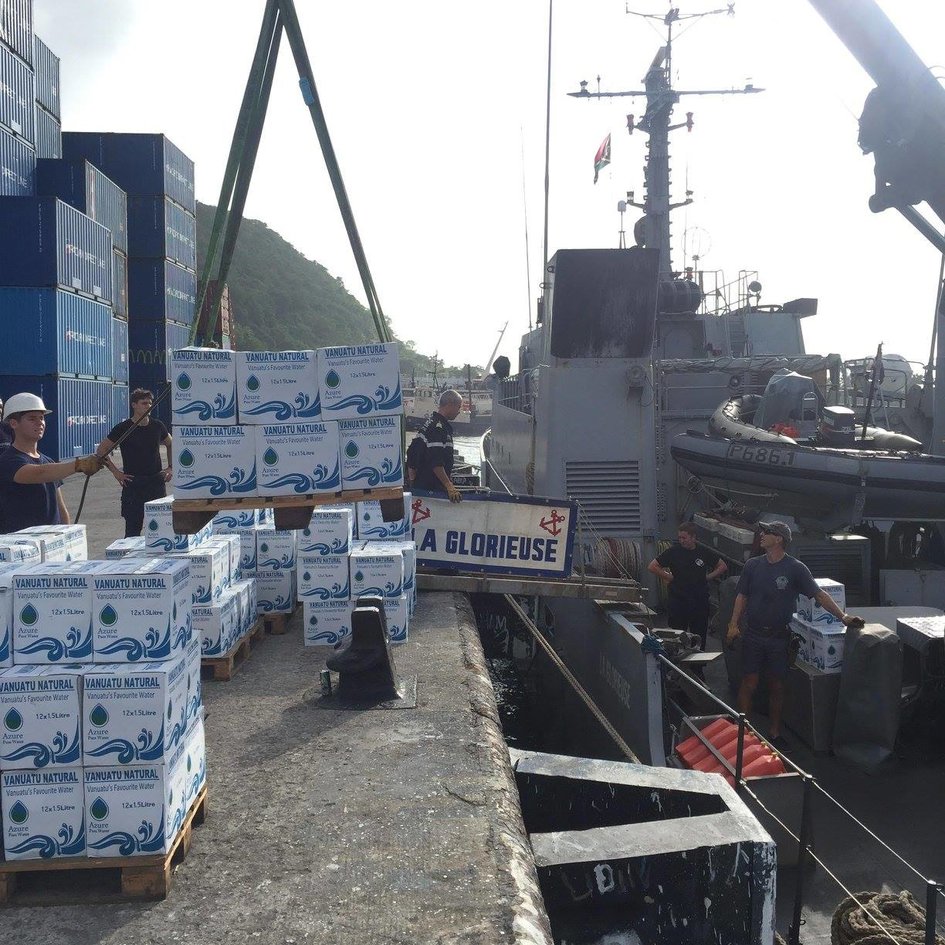 France has played a part in over 15 relief operations in the Pacific over the last 25 years: in Fiji, Vanuatu, the Solomon Islands, Niue, Papua New Guinea, Tonga, Tuvalu and the Cook Islands.
Credit: Embassy of France in Canberra

France, Australia and New Zealand signed the FRANZ Agreement on in December 1992. The partnership entails the three countries working together to coordinate disaster relief efforts in the Pacific. Some interesting sovereignty questions have arisen from this arrangement: FRANZ is only deployed when countries request assistance, and the efforts are civilian-led but supported by defense forces in some cases, and limited to the period of need. The idea of the multilateral cooperation is that the French, Australian, and New Zealand’s foreign affairs ministries, humanitarian and logistical assets, and defense forces will coordinate on an ongoing basis to be able to respond to disasters rapidly and efficiently. In many of the recent response incidents, the French role has been use of its military aircraft, specifically the small CASA planes, and navy vessels to transport emergency response personnel, medical supplies and other equipment to affected areas.

As far as other multilateral engagement goes, there has been some controversy over French influence in the Pacific Islands Forum (PIF). PIF was founded in 1971 by independent and sovereign nations with a shared desire to help decolonize the remaining island colonies. In 2016, PIF admitted New Caledonia and French Polynesia, the first “non-self-governing territories”, in the parlance of the UN, to be full members.

The French and the future

Looking more broadly at the realm of security possibilities, though large-scale armed conflict or violent extremism remains a distant concern for the Pacific Islands, it can’t be discounted entirely. The example of Operations Serval and Barkhane in 2013-4 Mali and the ongoing contestation over the French role in that country show that where Paris has a post-colonial relationship as well as ongoing security interest in stability, it is willing to commit major resources.

France considers itself a Pacific actor and is eager to compete as a global player. The Macron government’s “Strategy for an inclusive Indo-Pacific” heavily emphasizes French interests in peace and security in the region. Though this African example is different to the Pacific territories in question in uncountable ways, it’s important to include France as a security actor in play when assessing the strategic landscape over contestation over Oceania that has ramped up due to climate risk and Chinese involvement. All eyes (from our research group, at the very least) will be on President Macron’s trip to the Pacific in March for the One Planet Summit in Tahiti to lay out his vision for rising role of France in the region.