The building sector contributes a significant portion of the total global greenhouse gases. The 2009 McKinsey and Company report on Pathways to a Low-Carbon Economy cited building emissions as 18% of global GHG emissions. This can be as high as 30% of emissions in developed countries. According to the report, these emissions have the potential to be drastically reduced, possibly by a quarter of the projected 2030 levels, through sustainable design and better energy efficiency.

At present the most recognized way of quantifying sustainable design is through building rating systems. One of the oldest ratings is the Building Research Establishment Environmental Assessment Method (BREEAM) which began in 1990 in the UK. BREEAM is recognized as one of the “world’s foremost environmental assessment method.” It has become an integral part of the building industry and is well accepted and respected. Much of the UK has adopted BREEAM requirements in their development policies. 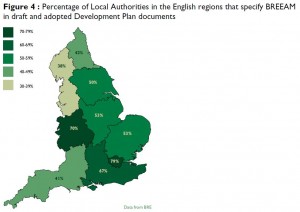 The US Green Building Council launched Leadership in Energy and Environmental Design (LEED) in 2000, a decade after BREEAM began in the UK. LEED has grown quickly, even outside of the US. This map published in 2013 shows an international comparison of LEED versus BREEAM projects. 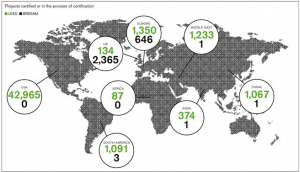 Yet while LEED is gaining prominence across the globe, it has come under heavy fire in its country of origin.

Interest groups within the materials industry have demonstrated serious opposition due to grievances that LEED does not recognize their products as “green.” Rather than directly opposing sustainable design, these interests groups – particularly the timber, plastic, and chemical industries – are rallying behind a less stringent rating system called Green Globes. For example, for the timber companies, Green Gloves is preferable because it gives credit for wood certified by the less environmentally responsible Sustainable Forestry Initiative whereas LEED only acknowledges the Forest Stewardship Council’s certification. The tactic is essentially to appear “green” by creating rating systems that validate and perpetuate the status quo.

The industry lobbyists have been garnering significant support. The following map shows states where some form of an anti-LEED bill has been introduced. It was published in May 2013, shortly after the North Carolina House of Representatives passed a “Protect/Promote NC Lumber” bill that included a clause which effectively banned public projects from using LEED by only allowing rating systems that don’t “disadvang[e] materials or products manufactured or produced” in NC. (This clause was removed before the bill passed through the Senate in September.) 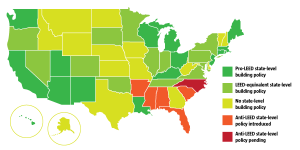 Anti-LEED lobbying has reached the federal level as well. For the past decade, the US General Services Administration (GSA) has required a minimum LEED certification for all federal-owned new projects or renovations. Yet Green Globes came close to replacing LEED during GSA’s recent five year evaluation. When the recommendation to continue with LEED came out in May 2013, there was significant backlash and the final decision is yet to be made. In the meantime, a more insidious attempt is underway to supplant LEED even while it retains its status as the GSA requirement.

Taking cues from the policies being introduced at the state level, Mississippi Senator Wicker filed an amendment to a Transportation, Housing and Urban Development bill that would ban LEED in practice, though not in name, by specifying a list of approved rating systems that federal funds could go towards. Louisiana Senator Landrieu joined Wicker to do the same with Shaheen-Portman’s bi-partisan energy efficiency bill that was being considered prior to the recent government shutdown.

So far, these efforts have amounted to possible amendments to as yet unpassed bills. However, in 2012, a defense authorization bill was passed that tried to undercut LEED by another means. Citing the cost of green building, the bill prohibited using Department of Defense funds to achieve LEED Gold or Platinum certification unless it could be demonstrated that there was no extra cost or that the funds would be recouped. (The irony of this is that in 2010 the GSA increased the minimum certification for its projects to Gold.) As a longtime leader in green building, the military continued to pursue sustainable design, not bothering to cap their projects at LEED Silver. According to the Honorable Katherine Hammack, Assistant Secretary of the Army (Installations, Energy and Environment),

“The challenge right now is one of education… If a building got a Gold-level certification and we were striving for Silver, that does not mean there was an incremental cost. We’re working to help prepare a report for Congress so they understand the benefit of high-performance buildings.”

This misconception of the cost associated with building green strikes at the heart of the issue. Setting aside the lobbying efforts by the materials industry, LEED certification has proven to be a hard wheel to set in motion in the US. Project owners are often loath to spend money on an idea or being “responsible,” not recognizing the significant return on investment.

In the UK, top developers are scrambling to go beyond minimum BREEAM requirements and create spaces that will attract tenants. With the market now recognizing the social and economic benefits of sustainable environments, green building in the UK has gained a momentum that will continue indefinitely.

There are various reasons why this momentum has not yet been achieved in the US. Some may be cultural expectations, lower energy prices than the UK, or simply needing more time to reach the tipping point. Yet there are others that could be addressed by reorganizing the way that we think about costs and leasing.

According to the a World Green Building Trends report, one of the largest challenges to green building in the US is the way that accounting is set up with a split between capital expenditure and operating cost savings. Cited by over 40% of the responders, this challenge was second only to high initial costs at 81%. In a sense, however, these two challenges are related because the high initial costs are more of a deterrent if the accounting system does not show them as being balanced by the reductions in operational costs. In reality, the expected payback period on green investments in new US buildings is 7 years. Average building lifespans are much higher than this, making sustainability a significant investment opportunity, as long as the accounting system or finance mechanisms can recognize it.

A second disconnect that affects a developer’s incentive to build green is the owner/tenant responsibilities outlined in the lease. Designing a sustainable environment is one thing, using it sustainably is another. If the lease dictates that the owner pays for utilities, the tenant has no incentive to keep down utility costs. Alternatively, if a tenant pays for utilities, the owner has no incentive to implement efficiency measures. An upcoming solution to this is a “green lease.” Green leases outline the environmental responsibilities of each party for the efficient building operations and mutual savings. In order to promote green leases and make them more accessible, the US Department of Energy has set up a Green Lease Library of resources including guidance, lease forms, and case studies.

The building sector is a significant emitter of greenhouses gases. Green building rating systems can help to mitigate the impact by guiding designs towards more efficient and sustainable solutions. USGBC’s LEED rating system is one of the best in the world. Though there are political opponents to LEED as well as market incongruities that discourage pursuing green design, sustainable building in the US is continuing to move forward. We can hope that we are following the UK and will soon reach a tipping point where market demands will make sustainable design a no brainer.