There are significant political, cultural, and financial barriers to implement long-lasting transportation reforms in India. To begin, scaling projects from the national to the local level, or even from one locality to another has been a long-standing issue in India. Though it is in the interest of state and local governments to enforce standards on vehicular emissions in terms of public health and improving efficiency in the long-run, issues remain in enforcing the Bharat III standards. Currently, a mere third of fuel consumed by motor vehicles in India meets Bharat IV standards, and high sulphur levels in the rest of the country have caused a lag in the implementation of other vehicle emission control technologies like the diesel particulate filter.  In order for diesel-powered vehicle emissions to be reduced in any significant way, all new vehicles must meet Bharat IV standards. Coincidentally, ten percent of all deaths worldwide resulting from vehicular emissions occurs in India, with total number of deaths projected to quadruple if more stringent vehicle emissions standards are not adopted. 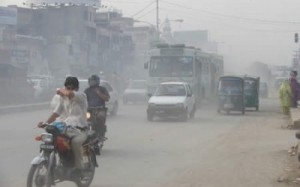 The divergent nature of state politics in India contributes to the difficulty of enforcing vehicle manufacturers in India to comply with vehicle emissions standards. At the administrative level, there is also a significant conflict of interest present in the role of the six testing agencies, which are a form of public-private partnership heavily subsidized by Indian vehicle manufacturers. There is also the issue of the ability of the Indian central government to formally recall vehicles that fail to meet Bharat IV and III standards after several testing cycles, which as of 2013, has not occurred on a wide scale.

Another issue preventing the successful implementation of emissions reductions policies in India is neglect- aside from the transport sector’s link to the energy sector, and its potential to win foreign investment and aid, making transport less carbon-intensive is not a high ranking priority of the Indian government. The National Climate Action Plan, for example, does not explicitly address transport. Further, the Bharat Standards and other vehicle compliance measures do not address CO2 emissions, which takes the largest share in GHG emissions produced by India. There are considerable technical and information barriers that prevent policy makers from making transport reform a priority. Part of this occurs due to the relative newness of the practice of counting up the emissions of India is a new practice, and measures are often inconsistent. Standardized emissions calculators that resemble those used in the United States and by WRI’s EMBARQ could provide a powerful way for local and state-level decision makers to see the way that low-carbon transport policies affect their constituents directly.

The institutional stickiness of fuel consumption in India is also considerable. Coal and diesel are long-standing fuel sources, and fossil fuel is also still heavily subsidized in India, and the price volatility of fossil fuels like diesel have been linked with fluctuations in food prices. Food prices, in turn, influence election results, an often make decision makers hesitant to address promoting real reform. Further, markets for alternative fuel vehicles are still emerging.

Funding for expensive sustainable transport projects is also a considerable barrier to transport reform in India in terms of planning. India, like many emerging economies, does not possess the necessary capital to sponsor the implementation of the expensive infrastructure projects necessary to reduce the carbon intensity of its transport sector. Current funding options like the Kyoto Protocol’s Clean Development Mechanism (CDM) have provided limited support for select transport projects in South America and Southeast Asia, but comprise only 0.6% of the 6707 projects that have received funding under CDM to date.Other funding mechanisms like the World Bank’s Clean Technology Fund and the Global Environment Facility have also made only modest contributions to funding transport infrastructure projects in developing countries worldwide.

In sum, the biggest issues plaguing the transport sector in India are visibility and accountability In order to address visibility at a national level, issues of financing and governance should be addressed more explicitly by India’s Climate Action Plan in its next iteration. Globally, state and international actors should address transportation in terms of co-benefits through including objectives like equal access to sustainable, low-carbon transport in the UN Sustainable Development Goals. Targeting equitable access and quality of life co-benefits rather than the flow of vehicles and targets for emissions reductions will provide a more solid sell for policy makers, particularly if they are given tools like emissions calculators to understand the benefits of less-carbon intensive transport projects like BRT to their constituent communities.

Regarding financing transport projects, which as mentioned previously can impose a substantial financial burden on city and state administrations with little national support, experts at WRI’s EMBARQ advocate a shift in focus from CDM funding to other sources like the UNFCCC’s Green Climate Fund, Joint Bilateral Investment, and Personal Private Partnerships (PPP). Dr. Tanvi Madan, who directs the India Project at the Brookings Institute, advocates public private partnerships as an alternative to CDM funding. These joint ventures involve the Indian government, the private sector, and foreign governments. The Clean Energy Project sponsored by the United States State Department, for example, has provided funding for urban infrastructure projects and clean energy development, which has had positive implications for the transport sector in India.

As with buildings, energy efficiency savings could deliver big health and emissions reduction benefits in the transport sector, and a minimal cost. According the ICCT, using local enforcement mechanisms for Bharat IV in a way similar to US CAFÉ Standards would improve accountability. In this vein, there should be a focus on city and state level enforcement mechanisms rather than national. This would enable bottom-up improvements among policy-makers, planners, and citizens as India’s cities attain higher levels of urban density. Ultimately, the goal of this policy area is to ensure the comprehensive and sustained functioning of low-carbon intensive transport systems. The elephant in the room is the appropriateness of this approach given the urgency of this policy issue, and the tendency of human beings to act in their own interest.