Just when Americans think China’s pollution cannot get any worse, it is making headlines again. Except this time, it is getting a little closer to home. A report by the University of California Irvine reveals China’s pollution is traveling across the Pacific Ocean and contributing to smog levels in the US. But before you start blaming the Chinese, the report goes on to say that some of the pollution is caused by goods manufactured for the US and European markets. Scientist and co-author of the report Steve Davis says, “We’ve outsourced our manufacturing and much of our pollution, but some of it is blowing back across the Pacific to haunt us.”

Sure, you can argue it was China’s economic liberalization, artificial weakening of the RMB and lack of industry standards, which allowed manufacturing practices to bring us to this point. But before we get into a heated China vs. US debate, let us focus on how this report might contribute to the domestic conversation surrounding greenhouse gas (GHG) emissions – which is one of the main reasons the authors published the report.

The idea of particulate matter traveling across the globe isn’t new. Reports of Fukushima radiation traveling to North America prompting Canadians to buy potassium iodide in bulk, remind us of just how “close” we are globally. And yet, when we read articles and stories of how Chinese children cannot go outside to play because of hazardous smog, or farmers  losing arable land due to heavy metal pollution, we might feel a twinge of pity, but at the end of the day “it’s their problem not mine”. But that is not completely true. This report is a stark reminder that climate change is a global issue. There are no invisible domes that separate country from country. Instead of ignoring the issues or playing blame games, at the end of the day if all we are doing is talking, we will all lose.

Too much of the public discourse surrounding GHG emissions and climate change is focused on who is to blame, and who (other than ourselves) should be doing more. While reports and articles that throw scientific facts of “2 degrees” or rising sea levels have a place in the grand discussion, often they are not compelling enough to the average American. The consequences are just not tangible enough for the average reader. Pollution changes that because it is a current, tangible problem. 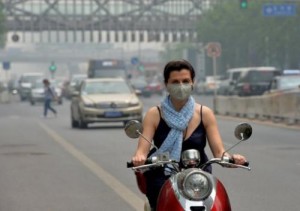 This could be you…

Sure, the average American might sympathize but not necessarily care enough to change their habits. But, how much more will Americans care if their kids will not be able to play outside? Or, they will have to wear a mask whenever they are outside? It is time to remind everyone that this is a collective action problem on a global scale. There is no escaping what the other countries are doing. The purpose of this post is to remind everyone one of us that we all need to care. We might disassociate ourselves from what is happening across the world, but if we keep this up, we will be facing the same problems.

Global citizens must start mobilizing around the issue of climate change. For starters, we need to start caring and getting out of the mentality that it is not our problem. We need to recognize the impact of OUR actions and decisions. The point is, if we expect any change to happen, it has to start with each and everyone of us. We cannot rely on others anymore.

Note: During our final presentations, my colleague Cherie from the Short-lived Climate Forcers group made a remark that if everyone in the world became a vegetarian, we would see significant reductions in emissions. This has sparked concepts like weekday vegetarianism. This is an example of little (for some of us, big) things we can all do to make a difference.