These two blog posts will be my final contribution to the Major Economies and Climate Change Research Group prior to us uploading our China country paper. These posts will focus on China’s iron and steel industry’s current emissions and industrial structure, alongside barriers for abatement potential, and will outline recommendations for China to reduce its emissions from this sector.

China is the world’s largest steel producer, manufacturing 716.5 million tonnes of crude steel in 2012, dwarfing the second largest producer, Japan, which manufactures 107.2 million tonnes. While a few of China’s large scale mills are state owned enterprises, most are small or medium scale and are privately run. When segregated by regional production, Chinese steel output is largely located along its North Eastern seacoast. 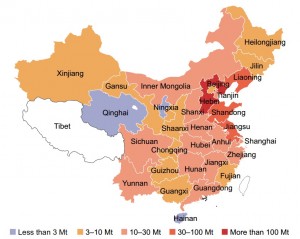 Greenhouse gas emissions within the iron and steel industry are linked directly to the traditional iron reduction process, which releases CO2 as a byproduct of iron ore and coking coal inputs, and indirectly through the localized energy production used to attain the high levels of heat required for iron reduction and other industrial processes. Specifying emissions related to an individual Chinese steel plant requires the analysis of several elements, including furnace type and production scale.

China’s average Basic Oxygen Furnace (BOF) has a carbon dioxide intensity greater than the Electric Arc Furnace (EAF) technology. This is because BOF steel production relies on the iron reduction process while EAF technology relies on scrap steel (steel obtained from end-of-life transportation, utilities, equipment, and buildings) and recycles it into a new product through melting. Significant for policy design, BOF constitutes 90% of China’s crude steel production, with only 10% of steel production attributable to EAF (in developed countries BOF provides as little as 38% of steel production while the EAF process provides 61%). China’s low adoption rate of EAF could be attributable to low supplies of scrap steel and limited scrap collection programs. However as China’s stock of steel ages, future scrap steel supplies could aid the EAF process.

Other factors in iron and steel emissions include furnace size. A larger furnace is more energy efficient because it minimizes the surface to volume ratio which reduces heat loss. While few Chinese furnaces operate at the most efficient size, the government has taken steps to eliminate steel overcapacity and discourage smaller, more inefficient mills by ordering the shutdown of blast furnaces under 400 m3 in volume and consolidating the top 10 iron and steel producers.

One of the largest political barriers in China’s iron and steel industry is the Ministry of Environmental Protection’s historic neglect by local authorities and industries due to lack of enforcement and sanction powers. Not only have fines been seen as negotiable, but the practice of “quiet days” (when enforcement officials rely on the honor system for reporting rather than inspecting factories) has also worsened the situation.  Additionally, the Ministry of Environmental Protection’s staff size is too low and diffuse to monitor effectively. When compared to the ratio of environmental agency employees to population size in the United States (around 57 employees per 100,000 population), China’s is much lower (5 employees per 100,000 population). Furthermore, China’s regulatory system over the iron and steel industry includes multiple agencies with overlapping slivers of supervision, resulting in coordination problems both horizontally and vertically.