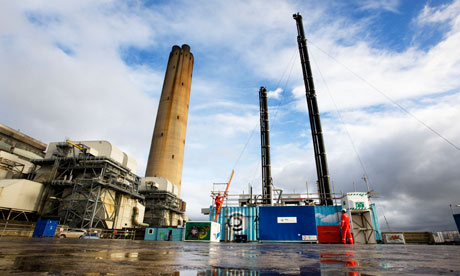 The UK began to shift away from coal in 1990.  This trend has continued to play out in recent years, to the point that in 2008 natural gas produced 45 percent of the UK’s electricity, while coal produced about 33 percent. Although there has been a significant decline of coal vis-a-vis natural gas in the UK’s energy production mix, it is unlikely that coal will drop significantly further in the short to medium term.1

There are two main reasons for why coal will continue to play an important part in the UK’s energy mix:

Second, coal has historically had greater price stability and requires less capital expenditure than gas.The six major utility companies in the UK have preferred to use coal because an infrastructure already exists for coal burning, and because coal prices are very low. While it is true that the UK’s domestic coal industry has taken a hit in recent years, due to rock bottom coal prices and increasing levels of imports, particularly from Russia (45% of coal imports) and Colombia (26% of imports)3, were coal prices to rise again the domestic UK coal production industry could pick up at least some of the slack.

Because coal will continue to play an important part of the UK’s energy portfolio, the government has expressed interest in scaling up CCS projects.In an effort to create a new cost-competitive CCS industry by 2030, the UK has enacted several policies to stimulate CCS technology deployment. This includes: a 1 billion pound commercialization competition to support design, construction, and operation of commercial-scale CCS; a 125 million pound research, development, and innovation program, and reform in the UK electricity market so that CCS will be able to compete with low-carbon energy sources.4

However, barriers to deploying CCS remain.Chief among these are the absence of market value on avoided carbon emissions. Were carbon emissions valued at a higher level, the incentives for developing CCS would increase. Furthermore, the six chief power producers in the UK– British gas, EDF energy, E.ON UK, npower, Scottish power, and SSE —  who provide 90% of the energy consumed in the UK, are risk averse, and barring significant government intervention to mitigate this risk aversion, they will be unlikely to further invest in CCS. Finally, the majority of the limited expertise in CCS storage lies in the oil and gas industry, not the power utilities. It is unclear who will fill the gap between producers and storers of CO2, and unclear of how CCS knowledge will diffuse from oil and gas companies to the utilities.

Note — this blog post is an excerpt from the upcoming EU Country Report from the Major Economies and Climate Change Research Group.