Joshua Busby Posted in — No Comments ↓ 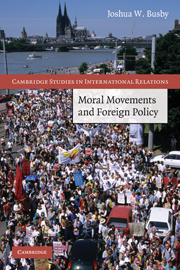 Why do advocacy campaigns succeed in some cases but fail in others? What conditions motivate states to accept commitments championed by principled advocacy movements? Joshua W. Busby sheds light on these core questions through an investigation of four cases – developing-country debt relief, climate change, AIDS, and the International Criminal Court – in the G-7 advanced industrialized countries (Canada, France, Germany, Italy, Japan, the United Kingdom, and the United States). Drawing on hundreds of interviews with policy practitioners, he employs qualitative, comparative case study methods, including process-tracing and typologies, and develops a framing/gatekeepers argument, emphasizing the ways in which advocacy campaigns use rhetoric to tap into the main cultural currents in the countries where they operate. Busby argues that when values and costs potentially pull in opposing directions, values will win if domestic gatekeepers who are able to block policy change believe that the values at stake are sufficiently important.

Reviews
“Joshua Busby’s ground breaking study illuminates the brave new work of transnational movements and American foreign policy. This book is a wonderful combination of sophisticated theory and empirical case study. The role and significance of non-governmental actors is one of the great questions of world politics today. Busby’s study will be an indispensible guide to scholarship in this area for years to come.”
– G. John Ikenberry, Albert G. Milbank Professor of Politics and International Affairs, Princeton University

“Joshua Busby argues that states’ responses to demands by moral advocacy groups depend not only on material costs but also on the fit between advocates’ values and local cultural traditions; the role of policy gatekeepers; and how the ‘messengers’ behave. Interests, values, political context, and agency all matter in this nuanced and disciplined account.”
– Robert O. Keohane, Woodrow Wilson School of Public and International Affairs, Princeton University

“This path-breaking book moves the study of transnational advocacy movements considerably further by identifying scope conditions for the success or failure of particular campaigns. Busby also advances the scholarly debate beyond sterile controversies about the relative importance of material interests versus moral values in international politics. A must read!”
– Thomas Risse, Professor of International Politics, Freie Universität Berlin, Germany

“The case-studies are rich and detailed—indeed, the sheer scale of research on display is impressive, in the body of the book and in the many appendices—and Busby is admirably clear in the way he goes about tracing the various processes that may be involved.”
– Ian Hall, Australian National University, International Affairs

“This book makes a major contribution to the comparative study of advocacy movements by introducing the literature on gatekeepers/veto players. It is a variation on the political opportunity structure approach with special relevance to stable, democratic systems. The model provides a means by which to identify the individuals and agencies within a state that either prevent or promote moral action.”
– Nandini Deo, Lehigh University, American Journal of Sociology

“The book is also a valuable theoretical corrective to so called ‘realist’ orientations (and even constructivist ones), that succeeds in showing how value commitments can and do play influentially in the real world (or at least the liberal democratic part of it). It is accessibly written, subtly and sensitively argued, and recommended to students of politics and international relations.”
– John Kane, Griffith University, Queensland, Australia, Global Policy

“By asking how social movements influence international relations, Moral Movements and Foreign Policy sits at an interesting intersection in the social sciences defined by political scientists who study international relations and sociologists who study activism. Joshua Busby draws these two fields together with a simple, but insightful, analysis of the ways in which activists manage to influence foreign policy.”
– Fabio Rojas, Indiana University, Perspectives on Politics

“There is more than one reason to praise this book. Firstly, the book examines the impact of transnational movements and campaigns….Secondly, the book is firmly comparative, both across issue areas and across countries. Since comparative analyses, especially on these two levels, are still a rare supply in this field, this is a very welcome addition to this literature. Thirdly and perhaps most importantly, the book goes beyond interest- based and simplistic cost/benefit accounts of social movement outcomes to show the importance of moral motivations and altruistic behavior.”
– Marco Giugni, University of Geneva, Contemporary Sociology

“Drawing on hundreds of interviews and employing comparative case-study method, Moral Movements and Foreign Policy provides a rich account of the state responses to advocacy campaigns. The book is at its best when it demonstrates that not only material interests but also values, policy gatekeepers, and messengers shape the responses of states to advocacy movements.”
– Hayriye Ozen, Atilim University, Turkey, Mobilization

“Besides the argument and the cases, another contribution of the book is the conceptual precision Busby brings to bear – distinguishing political from policy successes, state interests v. the micro-motives of individual politicians, issues v. campaigns.”
– Charli Carpenter, University of Massachusetts-Amherst, Lawyers, Guns, & Money Blog

“Joshua Busby has a new book out on transnational campaigns that might be the best new contribution to the advocacy networks literature since Keck and Sikkink’s original Activists Beyond Borders.”
– Charli Carpenter, University of Massachusetts-Amherst, Duck of Minerva Blog