Sculptor: The creator of this statue of Hermes is Peter Mansbendel, who was born in Switzerland, and later moved to Austin, Texas. He always longed to be a woodcarver, and through his career became noted in the Texas area for his work. Outside of the Hermes statue, he also created the carved doors of the Spanish Governor’s Place.

Location on Campus: BBA Office in McCombs School of Business

Reason for Creation: In 1922, students at the UT McCombs School of Business chose Hermes as the patron saint of the school. Although Hermes was chosen, he actually takes on many of the spheres of influence more attributed to Mercury, who was representative of excellence in business, and his sphere of influence included trade and merchants. This is not uncommon in Roman culture, as Romans made equivalencies between their own gods and Greek gods (Buxton, p. 218). It’s possible that the artist took aspects of both Hermes and Mercury in his rendering of this statue. Nonetheless, this Hermes statue used to be brought to the yearly business banquet, but now sits in the BBA office in McCombs, inspiring business students.

Description: Mansbendel’s statue of Hermes is 38-inch tall wooden sculpture made of pine. It depicts Hermes as a nude young man with an athletic body, which is reflective of the appearance Hermes had in the Classical period. Hermes is seen with many symbols/objects commonly that associated with him in Greek and Roman myth. In his left hand, he holds a caduceus near his heart, which is a defining feature for him. A caduceus is a staff, typically golden, and is a symbol of Hermes’ role as the herald/messenger of the gods. The staff is often shown with two entwined snakes (Pseudo-Hyginus, Astronomica 2.7). This well known object is representative of Hermes, and also his roles/spheres of influence, such as trade, or business. Hermes is also wearing winged sandals and a winged helmet, which was a common attribute of Hermes in Classical Greek art, as it represented his sphere of influence as the god of movement (Pseudo-Apollodorus, Bibliotheca 2. 37 & 46; Homer, Iliad 24. 339 ff; Buxton, p. 69). Additionally, Mansbendel uses other symbols that are more modern to reflect business today. In Hermes’ right hand, he is holding a bag of money. This is still associated with Hermes’ sphere of influence of trade and merchants, and a well known symbol of commerce like a bag of money would make it more apparent that the role of Hermes in this case is to be the patron saint of a business school. Finally, there is a bird of prey at Hermes’ feet. In the Homeric Hymn to Hermes, Zeus named Hermes lord of all birds of prey, and one of Hermes’ sacred animals is a hawk (Homeric Hymn to Hermes, 560). However, the hawk can also be interpreted as an American eagle, which makes this statue of Hermes to be seen American despite its roots in Greek/Roman culture. This is an act of cultural appropriation, with the goal of further connecting Hermes to American business and making his role more relevant to McCombs students. Although this statue of Hermes features many aspects and symbols associated with Hermes from Classical Greek myth, Mansbendel combines modern themes to emphasize Hermes’ relation to business excellence. 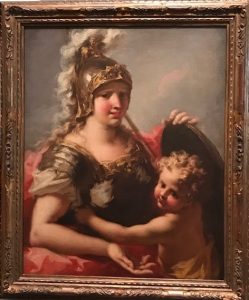 Artist: Bellona is an exquisite painting by Giovanni Antonio Pellegrini, one of the great Venetian decorative painters of the 18th Pellegrini was born in Venice, Italy in April of 1675. He began his artistic journey in Milan where he trained and apprenticed under the Milanese Paolo Pagani (Sphinx Fine Art 2012). Although he spent much of his time with Pagani, Pellegrini derived much of his influence from Sebastiano Ricci, another Venetian great, whose ‘sensuous and decorative aspects’ were a heavy part of Pellegrini’s paintings (Blanton Museum). Pellegrini gained much experience with mythological painting during his time in Venice, especially subjects from Ovid (George Knox 1995). George Knox, who is responsible for the first Antonio Pellegrini biography book, details the amazing painting career of Pellegrini and how many of his paintings “[celebrated] famous women” (George Knox 1995, 62).

Date of Creation: The Bellona was painted circa 1713-1714 and was acquired by the University of Texas’ Blanton Museum in 1998 as a part of the Suida-Manning Collection, which was gift from each respective family involved (Magazine Antiques 2014).

Location on Campus: This collection, which is located in the European section of the Blanton Museum, was accumulated by the Suida-Manning family, both of which are respected art historians, who purchased each piece as they studied it.

Acquisition Information: Together, Wilhelm Suida, his daughter Bertina Manning, and his son-in law Robert Manning acquired 240 paintings and 390 drawings. Unfortunately, all three passed away before Bertina and Robert’s daughter, Alessandra Manning Dolnier, “sold and gifted” the collection as a whole to the University of Texas in 1998 (Magazine Antiques 2014).

Description: Bellona is a 35 ½” x 29” oil on canvas painting depicts a powerful woman figure, wearing armor and holding a shield, with a baby on her lap (Giovanni Antonio Pellegrini).

This woman figure is denoted as being Bellona, the Roman goddess of war. Her Greek counterpart would be that of Enyo, who happened to be the female counterpart and close companion of the god of war, Ares (Theoi). Together, Bellona and Enyo are both well-known for their ruthlessness in war. In Quintus Smyrnaeus’ epic, The Fall of Troy, he details, “… deadly Enyo, her shoulders and her hands blood-splashed, while fearful sweat streamed from her limbs” (Quintus Smyrnaeus The Fall of Troy Book 8, 286). In the Roman poet Ovid’s Metamorphoses, he writes, “Bellona fouled the gods of hearth and home with flooding gore and stirred fresh scenes of violence” (Ovid Metamorphoses Book 5, 155). These descriptions do not seem to match the depiction by Pellegrini. He provides a more romantic perspective of Bellona. Pellegrini does an excellent job of capturing the beauty of Bellona through his use of vibrant colors and sensual style, both of which are his signatures (Sphinx Fine Art). I believe he works to portray Bellona as an inspiring figure, more of a ‘protectress of the innocent’ figure. This is exemplified by her clothing and the baby at her lap. As previously stated, Bellona is dressed in full armor with a shield. At the top of her helmet, there appears to be a small Eros-like figure, which could have been implemented to show that Bellona is from a divine lineage of Jupiter via Juno. The red-cheeked baby on her lap would be considered the symbol of innocence within this piece. Rather than depicting her renown merciless aspect, Pellegrini opts to display Bellona as more of an inspirational figure towards the innocent. This idea is not far off from her character. Statius, another renown Roman poet from the 1st century AD, writes an account of Bellona in He writes, “…[Bellona] gives swords to hurrying warriors… the brave anticipate her promptings and even the timid are inspired to… valour” (Statius Thebaid Book 4, 5). Pellegrini is able to expertly illustrate this notion through the symbol of the baby.