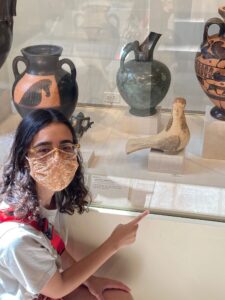 Maria Buendia sent me this photo of her trip to the MET this Summer. She took this picture of her and a Greek terracotta statuette of Siren (c. 500-550 BC). In early Greek art, Sirens are depicted as mischwesen (mixed-creatures) that had the head of woman and the body of a bird. Over time, they became more anthropomorphic in artwork, being depicted as female figures with bird legs and wings. In Greek literature, most notably the Odyssey and Argonautica, they are dangerous female monsters that lived near the seashores, luring sailors to their their death through their music/song. As to their shape, the origins of the feminine nature of the Sirens could be based on the Greeks’ personification of the coastline as a deceptive female with the irresistible power to draw sailors to their destruction. Perhaps the bird form of these monsters represents the seabirds that sailors listened to and looked for when determining if they were approach land. 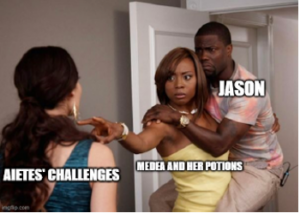