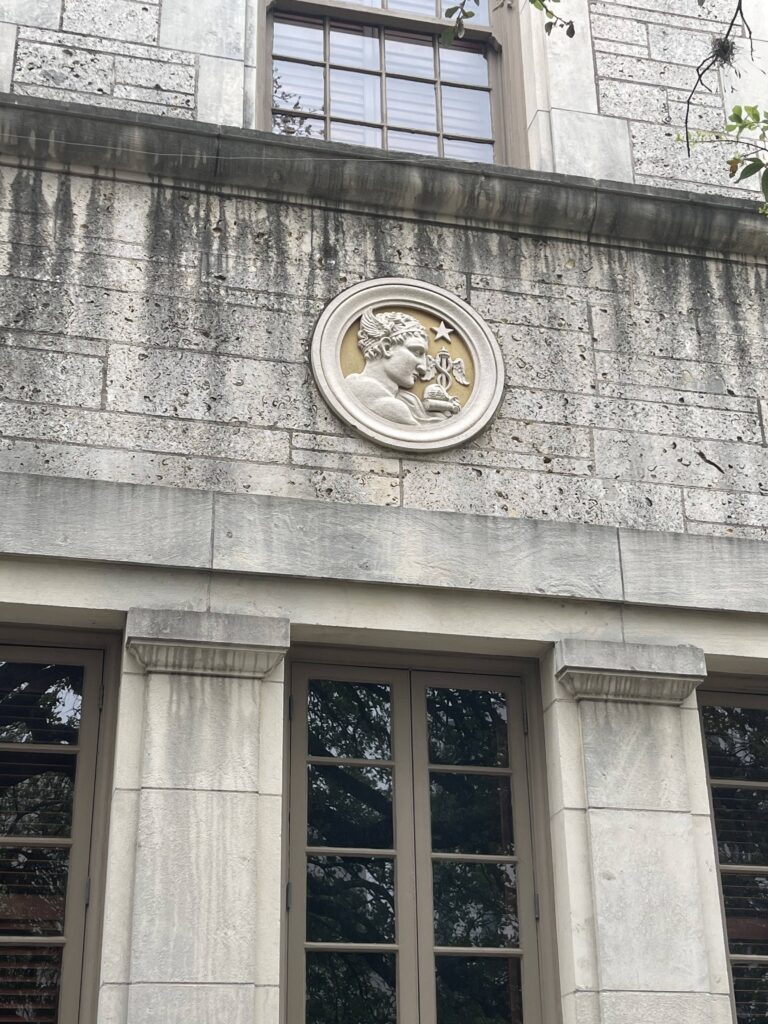 I. Artist: Paul Philippe Cret was the designer for the University of Texas at Austin Union building, which is home to the Hermes Medallion we will discuss today. Born in 1876, Paul Cret was an architect hired by UT Austin to consult on the master plan campus designs from 1930 until he passed away in 1945. Cret earned his place on the UT staff with an architectural degree from the Ecole des Beaux-Arts in Paris and a specialization in designing public buildings. After graduating, Cret continued to build a reputation for himself as a designer by becoming a tenured design professor at the University of Pennsylvania, and even started his own firm in Philadelphia that was responsible for impressive projects such as the Indianapolis Public Library (1914-1917) and the Delaware River Bridge (1920-1926). It was these accomplishments and more that put Cret at the
height of the Beaux-Arts movement, a style “characterized by the symmetrical,
axially disposed plans with elevations articulated by historicist detailing derived
from antiquity and the Renaissance”.

II. Date: The University of Texas at Austin Union Building was first designed in 1922 and ended construction in 1933.

III. Location: The Hermes Medallion is located on the west side outside wall of the UT Austin Union building facing Guadalupe Street. It is close to the third floor in height placement.

V. Description: The Hermes Medallion is a 2’9’’X1’11” limestone base-relief sculpture carved within a circle. The backing of the medallion is a darker shade of yellow, contrasting from the white beige of the Union walls.

Within the relief sculpture, a side profile portrait of Hermes is depicted with him wearing
a winged headband. The winged headband is a symbol of Hermes commonly associated with his divine ability to travel across boundaries. Reference to this accessory can be seen
in a description of an ancient Greek play portraying the Judgement of Paris, “Tiny wings
of gold were projecting from his locks, in which they had been fastened symmetrically on
both sides” (Apuleius, The Golden Ass 10. 30 ff). An example of boundary crossing can
be seen when Hermes travels down to Tartarus, crossing the border between the living
world and the dead, to rescue Persephone from Hades (Ovid, Fasti 4. 417 ff).4 This power
of movement may have been part of what drew the McCombes School of Business to
choose Hermes as their patron saint. His ability to overcome barriers is an inspiration to
future businessmen and women. Similarly, to the right of Hermes a star is depicted
hanging overhead. The star most likely represents the planet Mercury, the Roman name
for Hermes. According to the Hyginus’ De Astronomia, “This fifth star is Mercurius’
[Hermes], named Stilbon. It is small and bright. It is attributed to Mercurius because he
first established the months and perceived the courses of the constellations”
(Pseudo-Hyginus, Astronomica 2.42). This accomplishment of understanding the stars
and creating the months plays into the wisdom and innovation of Hermes, attributes the
McCombes School of Business strives for. The presence of the star may also be a
reminder to “shoot for the stars” and channel more of Hermes’s traveling abilities.
Underneath the star we see the caduceus wand. This well-known symbol features two
snakes intertwined with a winged rod between them. The caduceus wand is commonly
mistaken for the symbol of medicine, the rod of Asclepius. The actual caduceus wand
symbolizes harmony and trade as described in the Apollodorus myth of Hermes stealing
Apollo’s sacred cattle as well as the Hyginus’ De Astronomia. In the story, Hermes trades
a shepherd’s pipe for the golden staff Apollon used to herd the cattle (Pseudo-Apollodorus, Bibliotheca 3. 112 – 115). Later when traveling to Arcadia,
“[Hermes] saw two snakes with bodies intertwined, apparently fighting, he put down the
staff between them. They separated then, and so he said that the staff had been appointed to bring peace” (Pseudo-Hyginus, Astronomica 2. 7). Finally, below the caduceus we see a bag decorated with the modern dollar sign. This symbol, though it has no direct correlation to Hermes in classic Greco/Roman myth, could be referencing Hermes as the god of commerce, merchants, and trade. This association leaves no question of the relationship between Hermes and the school of business. Overall, all these symbols illustrate how the values of McCombs are personified through Hermes, making him a fitting patron saint.

Burkert, Walter. “From Telepinus to Thelpusa.” Essay. In Structure and History in Greek
Mythology and Ritual. Berkeley: University of California Press, 1982.

The Campus Mythomap is well on its way to being complete! We are currently updating the files for the Campus Mythomap to include all of the holdings in the Blanton Museum of Art that are related to Greek and Roman mythology. The Campus Mythomap is the brainchild of Cole Maquire and Lance Henderson, who have put a lot of time and effort into creating this incredibly useful and interesting tool. This interactive map allows faculty, students, and visitors to easily locate Greek and Roman mythological art and iconography on UT’s campus. By clicking on the map, you can see a quick description and image of the item of interest. You can also search by the name of the mythological figure to find all the places on campus that have images of a particular Greek or Roman hero or god. There is even a link that reveals who is the most popular mythological figure on campus. I can not thank Cole and Lance enough for putting this together! Please make use of this wonderful resource.